We want to share with you episode #6 of Custer & Wolfe, Building a Watch Company. This week we focus on the core of our business: preserving American history through vintage pocket watch restoration and revitalization. 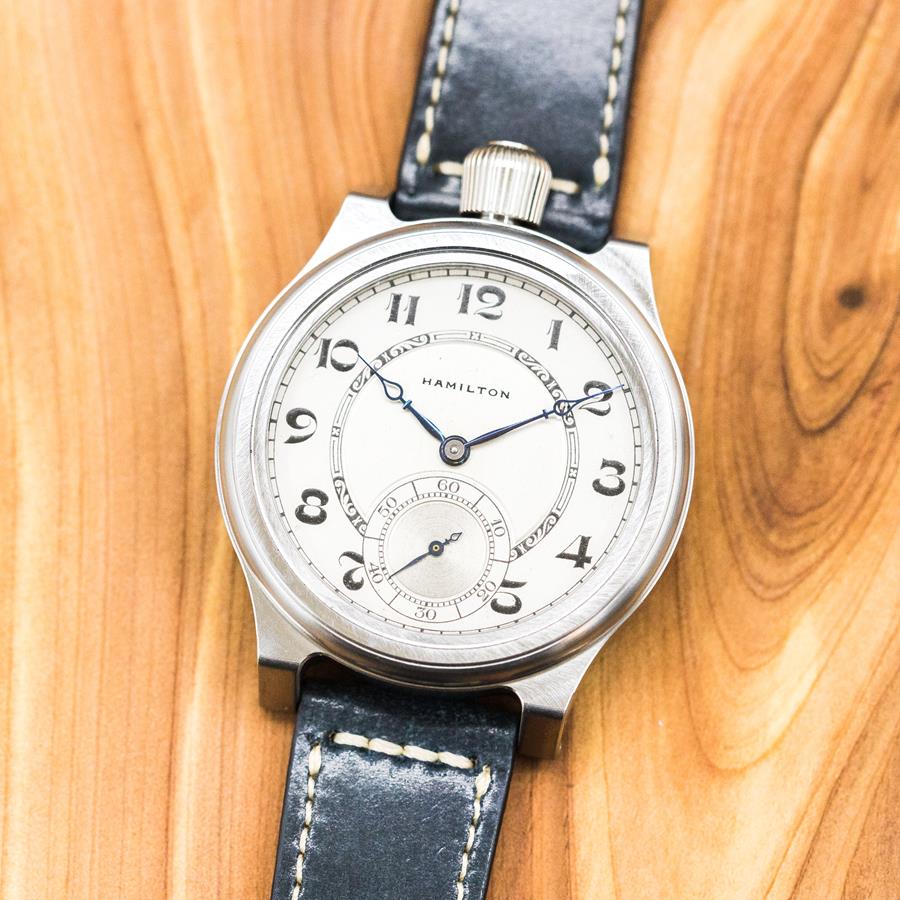 Today, we're thrilled to feature this sophisticated antique watch originally manufactured by the Hamilton Watch Company — the Lancaster 144. The watch boasts a stunning and elegant dial with a pristine white background and bold stylized numerals, and the piece features dark blue Breguet watch hands. We matched the original pocket watch with our protective Machined Titanium case, and we topped it off with a nickel-plated crown that complements the dial's background.

On the back of the watch, you can view its 912-grade open-face movement with a Reed regulator and gold-plated gears. The Lancaster 144's original pocket watch also boasts 17 screw-set jewels throughout its ¾ plate. Finally, we equipped this one-of-a-kind watch with our comfortable Cordovan Black leather watch strap, making the completed timepiece even more stylish.

The Hamilton Watch Company initially produced this watch in Lancaster, Pennsylvania, in 1925 — the same year that The New Yorker published its first magazine. Married journalists Harold Ross and Jane Grant created The New York Times to provide the public with a clever and sophisticated humor publication. The magazine has served as an important piece of American pop culture for almost a century, and it's featured the writings of numerous acclaimed American authors, including Truman Capote, Shirley Jackson, Ernest Hemingway, and Stephen King. 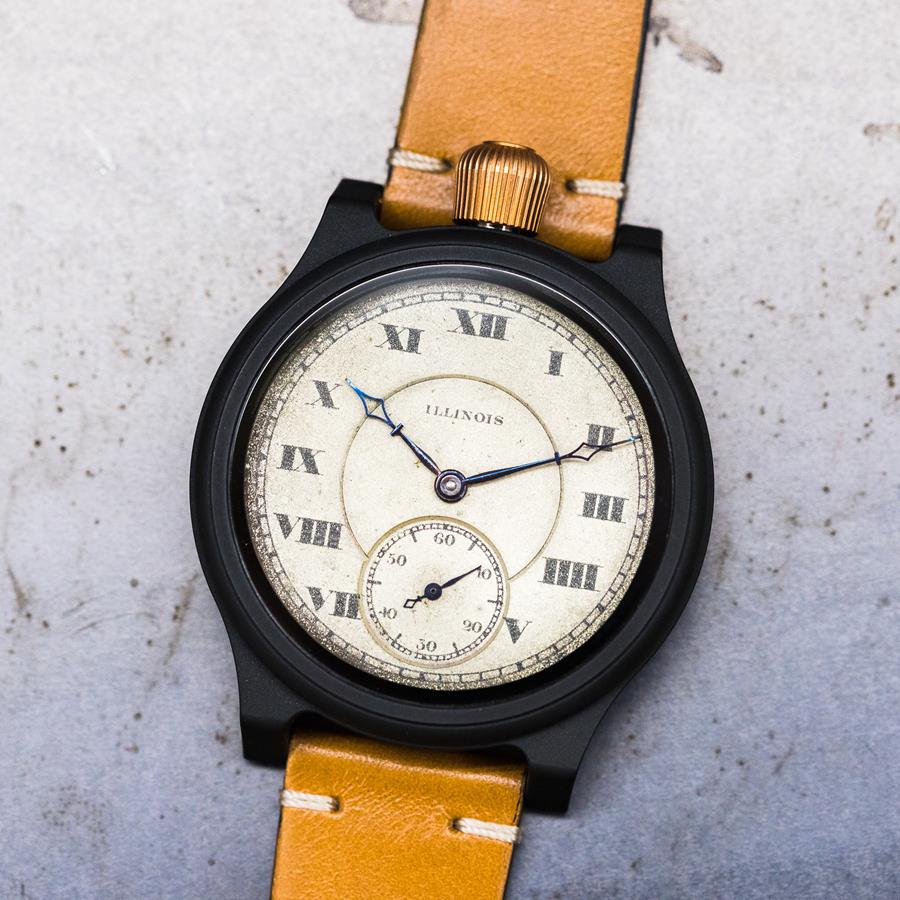 We’re pleased to showcase this handcrafted and highly original piece initially produced by the Illinois Watch Company 110 years ago — the Springfield 480. The watch boasts an antique dial with a light-tan background and bold, dark Roman numerals. The piece also features a unique charcoal shading along its outer edge that further emphasizes its historicity and remarkable design. We matched the watch with our robust, stylish DLC case, which makes the sophisticated dial look even more stunning, and we equipped it with a copper crown. Our DLC case enables watch enthusiasts to view this piece’s historic inner workings, including its 255-grade open-face movement and going barrel.

The back of the watch also features impressive and breathtaking bronze-plated gears powered by 19 splendid jewels throughout its ¾ plate. Finally, we made this antique piece even more eye-catching with our Rye leather watch strap.

The Illinois Watch Company originally manufactured this piece in Springfield, Illinois, in 1912 — the same year in which Arizona became the 48th state. The United States gained ownership of the land now making up Arizona in 1848 after the Mexican-American War. Although Arizona now has a population of over 7 million, it only had just over 200,000 residents at the time in which it became an official state. Its population began to boom in the mid-20th century with the increased availability of modern luxuries like air conditioning and refrigeration.

We’re excited to present to you this stunningly sophisticated timepiece originally manufactured by the American Waltham Watch Company almost a century ago — the Boston 448. The watch features a breathtaking dial with an intricate center design and black stylized numerals. The piece’s bronze-colored spear hour and minute hands complement its tan-brown background. We encased the pocket watch within our robust, gleaming Machined Titanium case, and we paired it with a copper crown, emphasizing the dial’s elegant colors.

On the back of the watch, you can view the piece's Riverside-grade open-face movement along with its Breguet hairspring and bridge plate. The original pocket watch also displays luxurious gold-plated gears powered by 19 jewels. Finally, we matched this elegant watch with our stylish and comfortable Cordovan Oxblood leather watch strap.

The American Waltham Watch Company initially manufactured the Boston 448’s original pocket watch in Waltham, Massachusetts, in 1923 — the same year that country music legend Hiram “Hank” Williams was born in Mount Olive, Alabama. Hank Williams was known for his honest, emotional songwriting, and he was highly influential for country music as well as popular music in general. Many regard him as the first country superstar. Tragically, after years of drug and alcohol abuse, he died at the age of 29 from a heart attack. 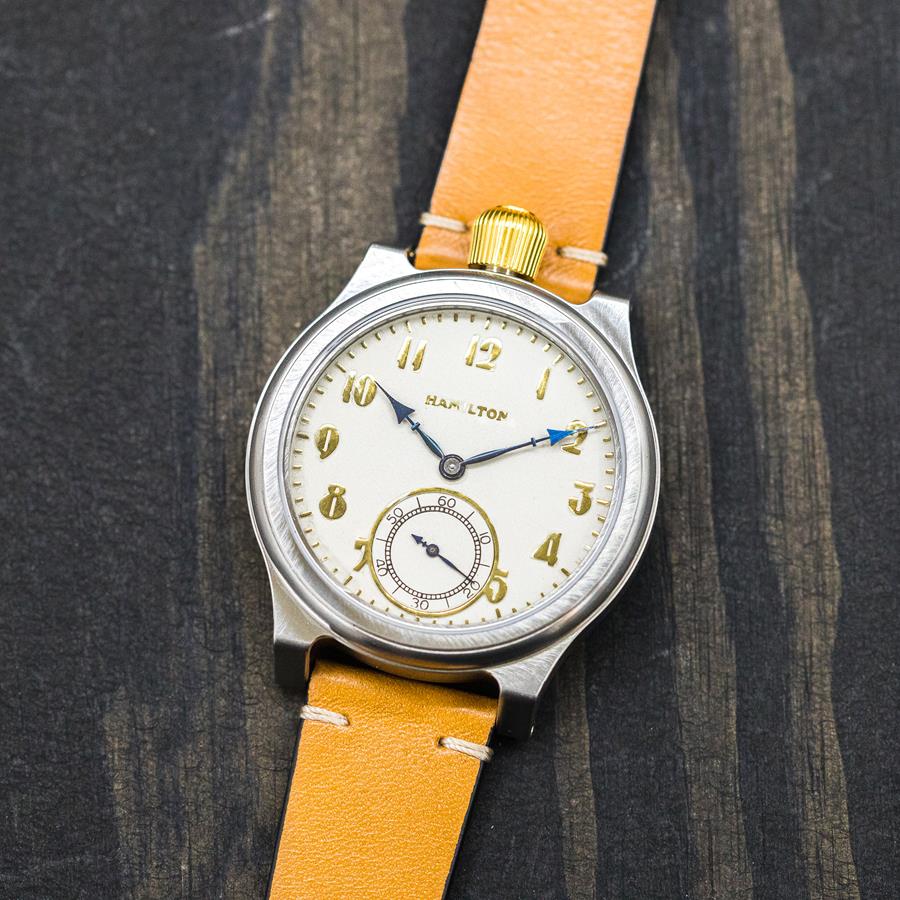 We’re excited to showcase this one-of-a-kind piece originally produced by the Hamilton Watch Company — the Lancaster 142. The watch boasts a breathtaking cream-colored dial with dark blue arrow watch hands and rustic-style golden numerals. We paired the historic pocket watch with our powerful and scratch-resistant Machined Titanium case and a gold-plated crown matching the dial’s numerals. The unique Machined Titanium case features a rear display that reveals the piece’s stunning gold-plated gears and other inner workings.

The back of the watch has a 912-grade open-face movement with a nickel finish, black inlay color, and pendant setting. The watch also shows off 17 luxurious screw-set jewels throughout its ¾ plate. To top off the final product, we equipped the Lancaster 142 with our hand-crafted Rye leather watch strap, which goes perfectly with the dial’s color scheme.

The Hamilton Watch Company manufactured the original pocket watch in Lancaster, Pennsylvania, in 1935 — the same year that George Herman “Babe” Ruth hit his final home run in Major League Baseball. On May 25, 1935, the Boston Braves went head-to-head with the Pittsburgh Pirates at Forbes Field. Although the Pirates beat the Braves 11-7, Ruth played a phenomenal game with six runs, including three home runs. Ruth retired from the MLB only eight days later on June 2, 1935. His home run record of 714 remained untouched until Hank Aaron of the Atlanta Braves hit his 715th home run on April 8, 1974. 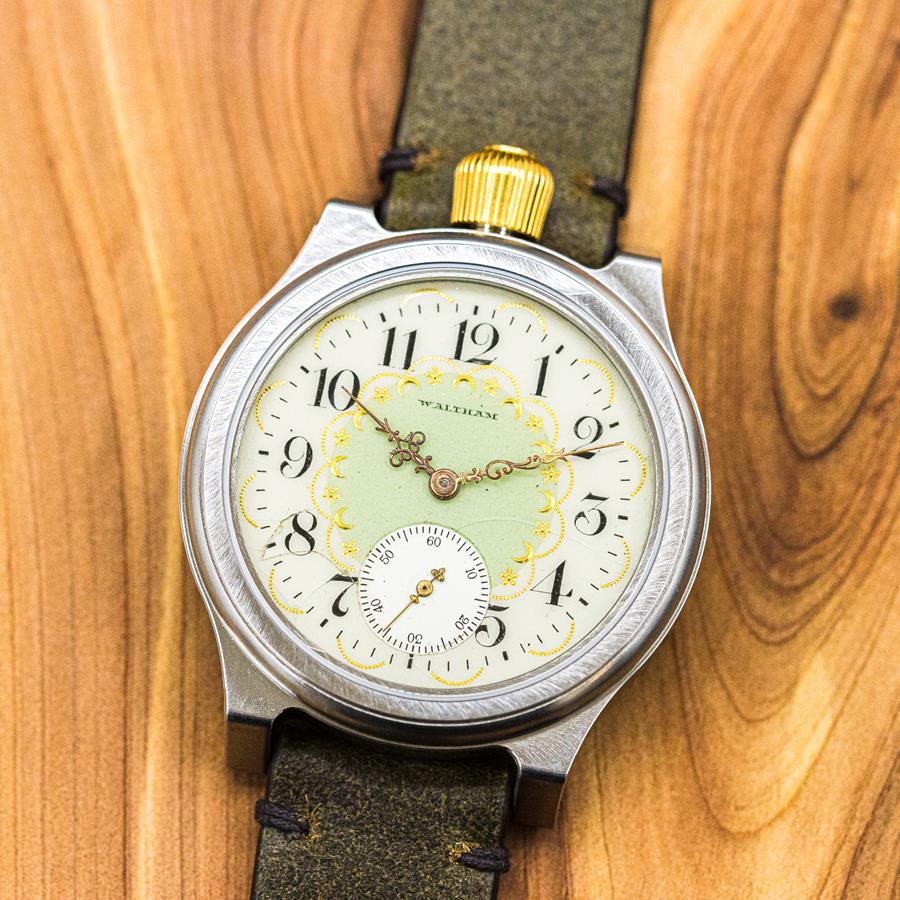 We're thrilled to present this unique and historic piece originally produced by the American Waltham Watch Company in 1901 — the Boston 444. The watch's dial features a breathtakingly original style with a floral design accompanied by gilt stars and crescents. The dial also has an eye-catching light green shading as well as remarkably sophisticated hour and minute hands. We emphasized the pocket watch's one-of-a-kind dial by encasing it within our gleaming, scratch-resistant Machined Titanium case, and we equipped it with a gold-plated crown that matches the dial's golden details.

The back of the watch boasts an antique Maximus-grade open-face movement and impressive bronze-plated gears. The original pocket watch also features 21 lavish jewels throughout its ¾ plate. Finally, we paired the Boston 444 with our comfortable, hand-crafted Olive leather watch strap, further drawing attention to the dial's noteworthy colors.

The American Waltham Watch Company initially produced the Boston 444's pocket watch in Waltham, Massachusetts, in 1901 — the same year that Annie Taylor became the first person to travel over Niagara Falls in a barrel. The 63-year-old schoolteacher thought that performing the dangerous feat would earn her fame and fortune, but people quickly forgot about her shortly after her foolhardy stunt. Although she failed to make a name for herself during her lifetime, she inspired others to travel over Niagara Falls intentionally, and her legacy inspired a musical, multiple poems, and a children's book titled Queen of the Falls. 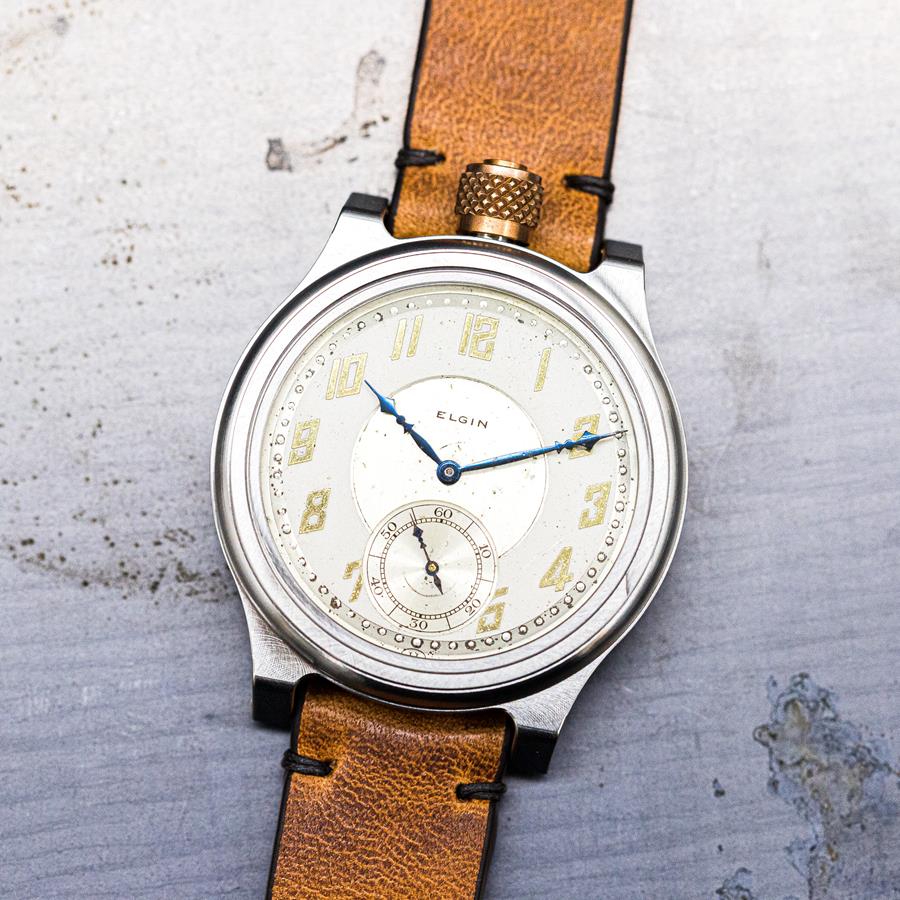 We’re excited to showcase this antique piece initially manufactured by the Elgin National Watch Company nearly a century ago — the Chicago 475. This historic watch features a cream-colored dial with gilt, stylized numerals and light blue watch hands. We encased this one-of-a-kind pocket watch in our robust and scratch-resistant Machined Titanium case, and we paired it with a copper crown.

On the back of the watch, you can view its 345-grade open-face movement with a going barrel, Moseley regulator, and Breguet hairspring. The piece also boasts gold-plated gears powered by 17 resplendent ruby and sapphire jewels atop its ¾ plate. We completed the piece by pairing it with our rustic and fashionable Tobacco leather watch strap.

The Elgin National Watch company produced the original pocket watch in Elgin, Illinois, in 1926 — the same year that the United States passed the Air Commerce Act to regulate the aviation industry. In the early 20th century, flight accidents were common due to a lack of safety standards. In response, President Calvin Coolidge created a board to explore the option of creating federally-mandated safety regulations. The board found that safety regulations were necessary for the future of American aviation, and Congress passed the Air Commerce Act on May 20, 1926.