Did You Get The Message Last Week?

Did you get our last email?

On Thursday we sent an email to our Military Edition Waiting List with the subject line "You'll be the first to know."

If you are interested in purchasing the Military Edition this year (available at 12pm MST on November 11th), or even just learning more about it, and you DID NOT receive that email, please respond to this message and we'll make sure you're on the list!

We have a few more weeks of information coming to our waitlist, so don't miss out. Reply and say "Sign Me Up!"

Giving People Jobs They Like and Getting More Done

It may sound crazy, but when you give people jobs they actually enjoy and are good at, you get a lot more done. We’re finding that out at Vortic Watch Company, and our team feels like they’ve really begun to hit their stride. With this increased productivity, Tyler has more time to work on smaller projects around the shop. This means that we’re inching closer and closer to having seven unique watches per week instead of six! 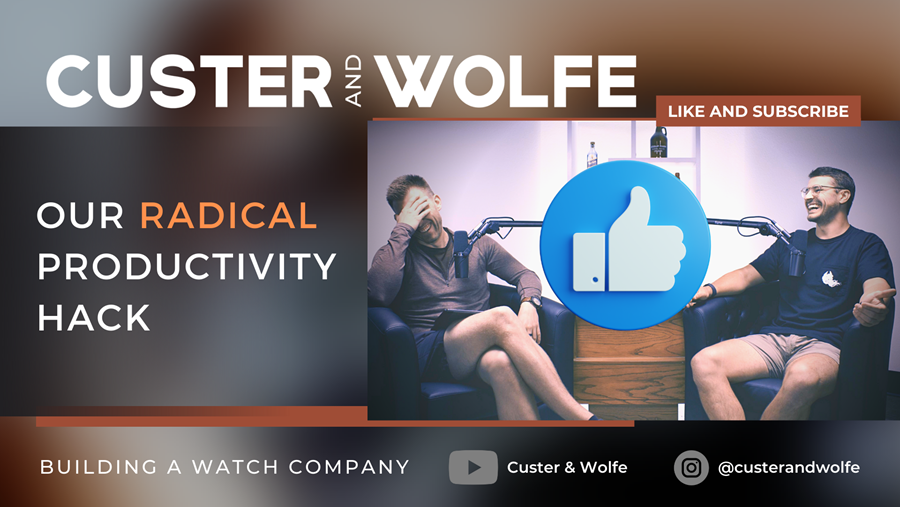 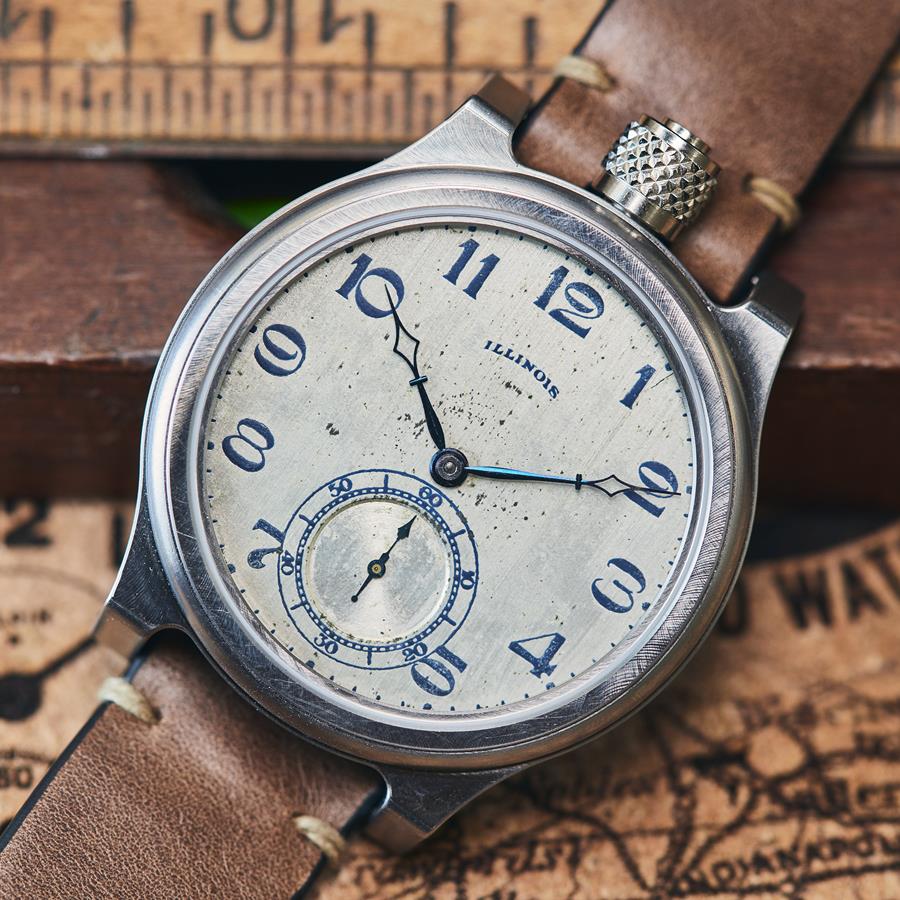 We’re thrilled to showcase this stunning piece originally manufactured by the Illinois Watch Company in 1923 — the Springfield 537. The watch features an eye-catching, antique dial with an aged, cream-colored background and bold, dark-blue numerals. The front of the watch also displays a matching subdial and teal diamond-shaped kite hands. We matched this historic pocket watch with our Machined Titanium case and topped it off with a nickel-plated crown. Our Machined Titanium case features a transparent back, enabling you to view the watch’s Autocrat-grade open-face movement. This movement boasts gold-plated gears as well as 17 screw-set jewels throughout its center bridge plate. The keen-eyed among you will notice that the gilt engraving reads “The Autocrat” - but this watch has an interesting feature if you look even closer. At some point in the past, an overzealous watchmaker managed to scratch the surface of the plates while servicing the watch! For us, this is fascinating evidence of the living history our watches represent. Finally, we equipped this remarkable watch with our comfortable and artisan-designed Natural leather watch strap, making the finished product even more stylish and memorable.

The Illinois Watch Company initially produced the Springfield 537’s pocket watch in Springfield, Illinois, in 1923 — the same year that the USS Shenandoah launched at the Lakehurst Maxfield Field in New Jersey, which was the location of the Hindenburg disaster in 1937. Shenandoah was the U.S. Navy’s first airship, and it was also the first airship to fly across North America. Tragically, the airship crashed in Caldwell, Ohio, in 1925, killing 14 members of the 43-person flight crew. 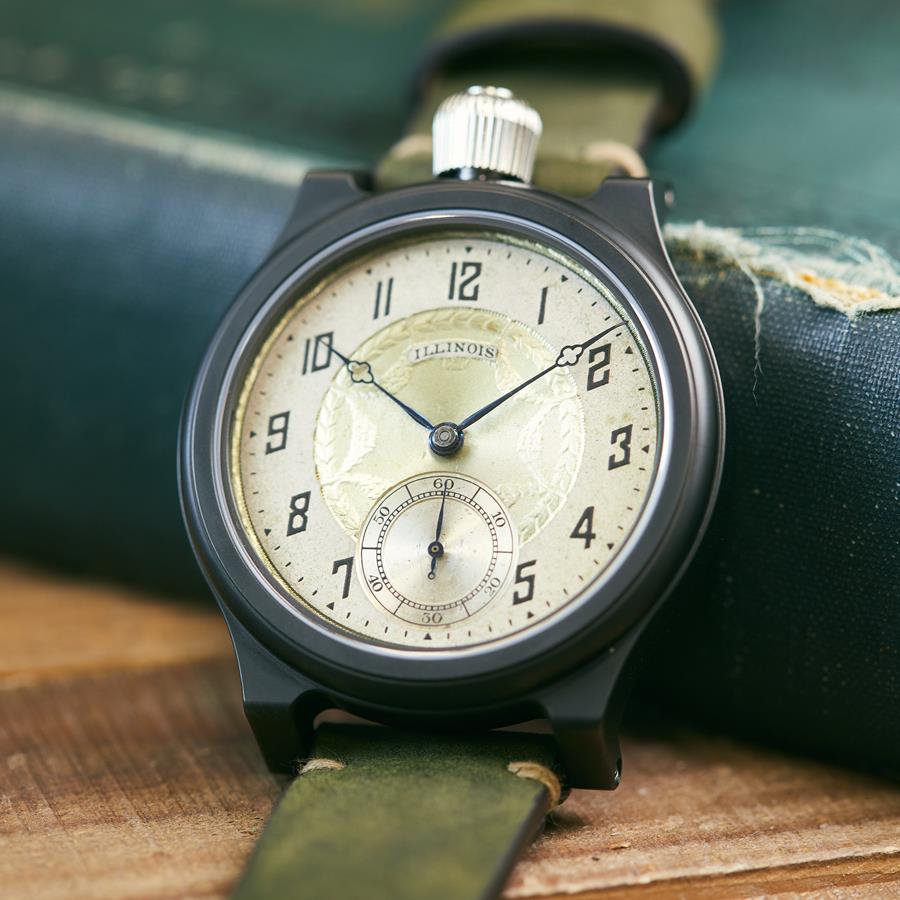 We’re incredibly pleased to show you this marvelously-sophisticated piece originally manufactured by the Illinois Watch Company in 1925 — the Springfield 540. This breathtaking and historic watch features a cream-colored dial with a stunning, textured center pattern. You can also see the pocket watch’s original blued steel gothic hands as well as its stylized black numerals. We matched this exquisite antique piece with our Gunmetal Titanium case and topped it off with a nickel-plated crown, adding even more style to the front of this handsome watch. The rear side of the watch sports a 405-grade open-face movement with a pendant setting, nickel finish, and center bridge plate. The movement also boasts a striking “Sterling” engraving. Finally, you can view the watch’s pristine gold-plated gears and 17 jewels through our unique transparent back. We made this American-made antique watch wearable by equipping it with our hand-crafted Olive leather watch strap.

The Illinois Watch Company initially produced this handsome piece in 1925 — the same year Frank Heath started his journey to visit all 48 states — years before Alaska and Hawaii were officially incorporated — along with his horse, Gypsey Queen. Heath completed his 11,000-mile journey over the course of two years, and he detailed his adventures in his 1941 book Forty Million Hoofbeats.

See More Pictures Of This Watch Here
The Springfield 538 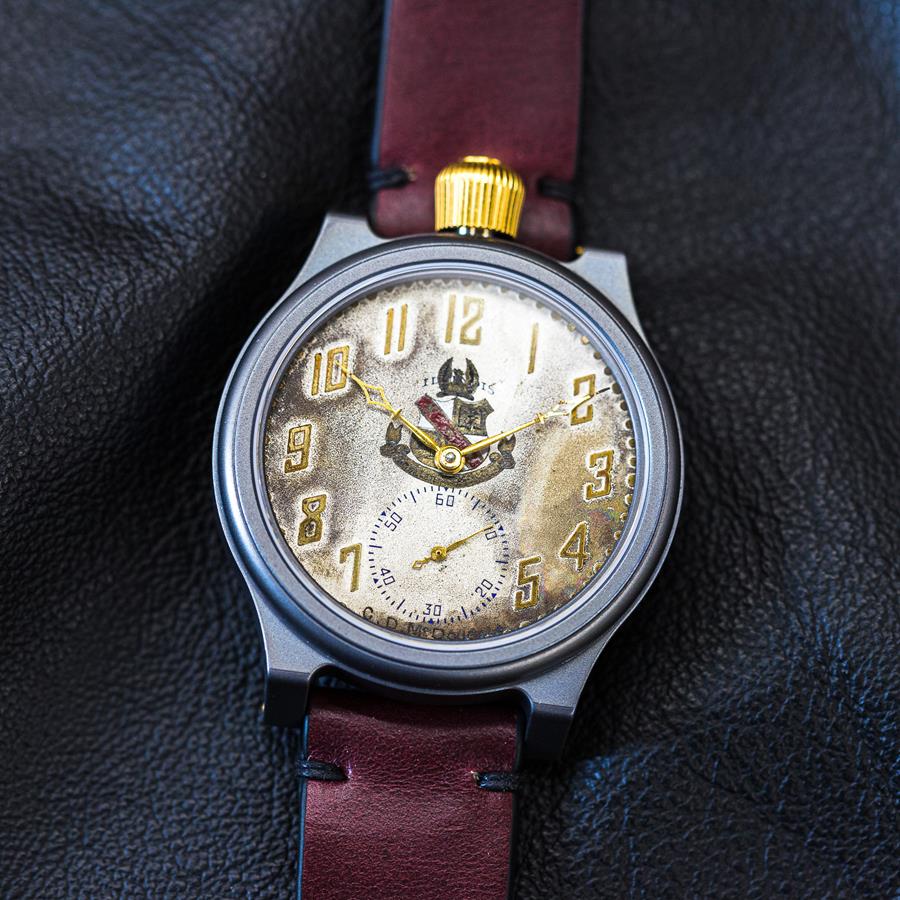 We’re delighted to feature this distinct watch initially produced by the Illinois Watch Company over a century ago — the Springfield 538. This splendid piece boasts stylized gold-colored numerals along with matching diamond kite hands. The front of the watch also features a breathtaking coat of arms and a subdial with blue numerals and a gold-plated hand. We encased this eye-catching pocket watch within our powerful Blued Titanium case, emphasizing the dial’s golden details, and we topped it off with a sumptuous-looking gold-plated crown. Our Blued Titanium case features an open back, enabling you to view the antique pocket watch’s impressive Autocrat-grade open-face movement with a gilt inlay color, radial finish pattern, and nickel finish. The back of the watch also showcases a fitting engraving that reads “The Autocrat” as well as gold-plated gears and 17 screw-set jewels. Finally, we added even more sophistication to this watch by equipping it with our hand-crafted Merlot leather watch strap, matching the coat of arms’ sash.

The Illinois Watch Company originally manufactured the Springfield 538’s pocket watch in Springfield, Illinois, in 1923 — the same year the Riegelmann Boardwalk opened in Coney Island. Before the construction of the Riegelmann Boardwalk, Coney Island’s beachfront was mostly inaccessible to the public. Most of the land was privately owned by wealthy developers who constructed seaside resorts and expensive restaurants. In the early 20th century, economists and public associations began championing the construction of the boardwalk to make the area more accessible as well as stimulate the local economy. Once built, the boardwalk was named after Edward J. Riegelmann, the president of the Brooklyn borough, who was heavily involved in the boardwalk’s development. Although the official name remains, Rigelmann actually rejected having the boardwalk be named after him. Instead, he preferred calling it simply the “Coney Island Boardwalk.” 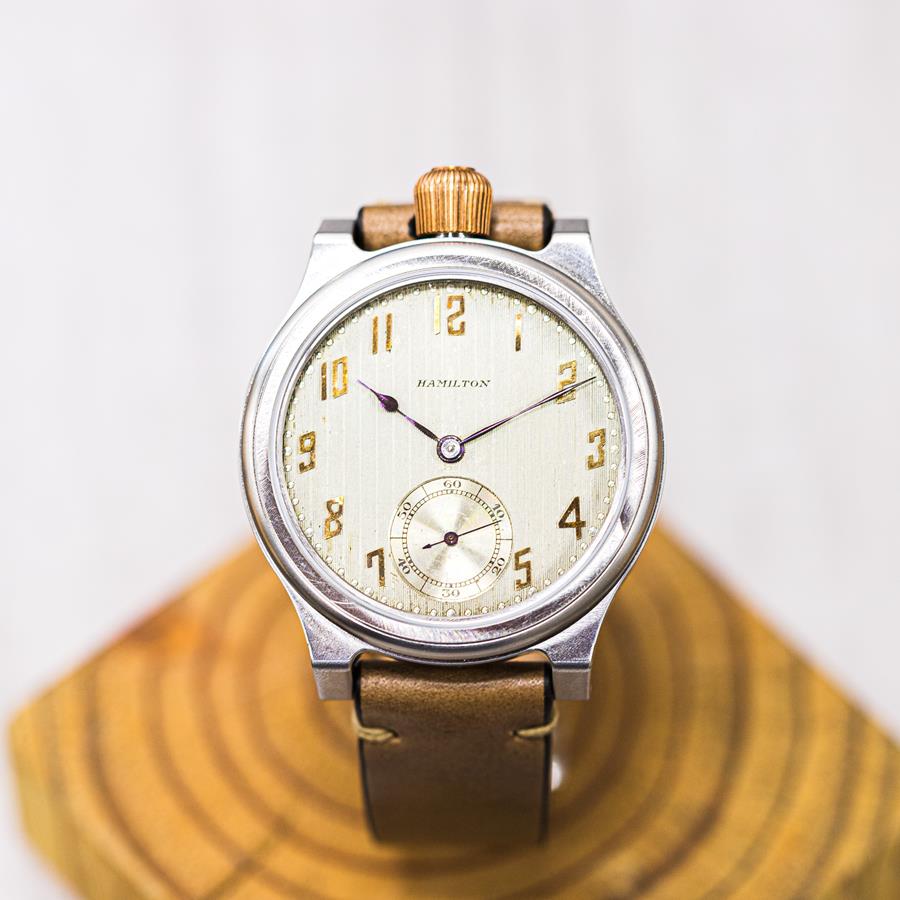 We’re thrilled to present to you this highly luxurious wristwatch that features a Hamilton Watch Company pocket watch from 1935 — the Lancaster 164. The piece’s original pocket watch boasts sumptuous details on its cream-colored dial, including violet spade & whip hands and a practical subdial. But perhaps the most remarkable feature of this watch is its hour numerals — these incredibly handsome numerals were crafted from solid 18-karat gold. We protected these stylish and valuable details by encasing the pocket watch within our robust Machined Titanium case, and paired it with a copper crown, complementing the dial’s stylish numerals. On the back of the watch, you can view its 904-grade open-face movement with a patent motor barrel, golden train, and micrometer regulator. The watch’s rear side also boasts gold-plated gears and 21 gold-screw-set Ruby jewels within its center bridge plate. To top the watch off, we matched it with our comfortable, artisan-designed Natural leather watch strap, matching the pocket watch’s crown and numerals.

The Hamilton Watch Company initially produced the pocket watch in Lancaster, Pennsylvania, in 1935 — the same year Chevrolet released its first generation Suburban, which many consider to be the first sport utility vehicle (SUV). At the time in which Chevrolet debuted the vehicle, no one used the term SUV, but many consider this rugged conveyance to fit this classification because Chevrolet constructed the vehicle with a station wagon body on top of small truck chassis, making it durable while also having the ability to transport up to eight people. 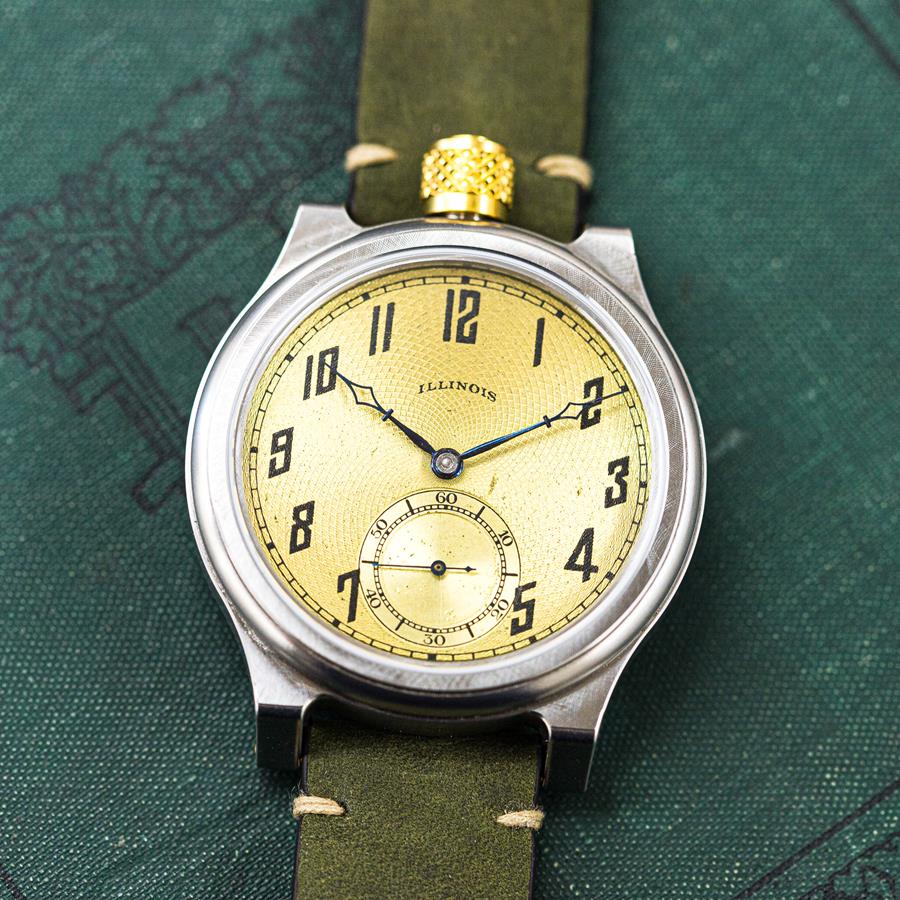 We’re excited to showcase this wearable piece of history initially produced by the Illinois Watch Company almost a century ago — the Springfield 536. This stunning, antique piece features a gold-colored dial with stylish black numerals and a useful subdial. You can also view the watch’s breathtaking blued steel diamond kite hands, which glimmer brilliantly against the dial’s golden colors. We emphasized the dial’s sumptuous design by encasing it within our Machined Titanium case and equipped it with a gleaming gold-plated crown. Our Machined Titanium case boasts a transparent back, enabling you to view the pocket watch’s original 274-grade open-face movement that sports a nickel finish and pendant setting. The movement’s conspicuous engraving reading “Santa Fe Special” refers to the Santa Fe Railroad line. This remarkable pocket watch also features gold-plated gears as well as 21 jewels throughout its ¾ plate. Finally, we made this watch wearable by matching it with our Olive leather watch strap, making this one-of-a-kind antique piece even more distinct and attractive.

The Illinois Watch Company originally manufactured the Springfield 536’s pocket watch in Springfield, Illinois, in 1923 — the same year Clarence Birdseye invented the contemporary method for freezing food. Humans have likely used the freezing method of preserving food for thousands of years, but Clarence Birdseye created the modern frozen food industry through his particular preservation method. Birdseye froze food by using refrigerant-filled hollow metal plates that could maintain a cooled temperature of between -21 to -50 degrees Fahrenheit. Then, Birdseye would fill cartons full of food and place the cartons between metal plates. With this innovative preservation method, Birdseye created the first frozen food company: Birds Eye. 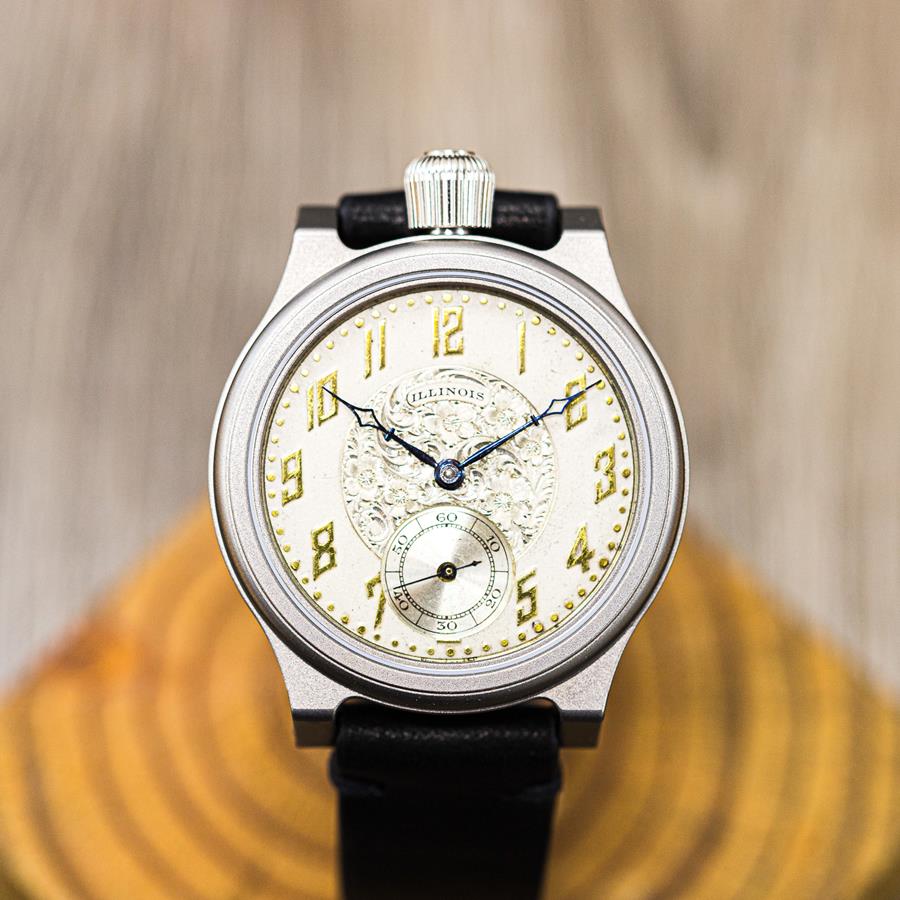 We’re pleased to showcase this sumptuous piece initially produced by the Illinois Watch Company nearly a century ago — the Springfield 534. The product’s antique pocket watch features a sophisticated center design pattern and dirty-gold-colored numerals that look breathtaking against its cream-colored background. The front of the watch also features a glimmering subdial and blued steel diamond kite watch hands. We encased this elegant pocket watch within our robust and stylish Sandblasted Titanium case and topped it off with a nickel-plated crown. On the back of the watch, you can view its 405-grade open-face movement with a going barrel and center bridge plate. The rear side of the watch also displays strong and visually-pleasing gold-plated gears and 17 screw-set jewels. Finally, we matched this remarkable watch with our Stout leather watch strap, adding even more style to the final product.

The Illinois Watch Company originally manufactured the Springfield 534’s pocket watch in Springfield, Illinois, in 1925 — the same year Tom Lee famously rescued 32 passengers from a sinking sternwheel steamboat, M.E. Norman. The U.S. Army Corps of Engineers operated the M.E. Norman and launched the steamboat in 1924. The boat capsized in the Mississippi River for unknown reasons only a year later. Tom Lee, a river worker, was returning to shore on a motorboat when he noticed the ill-fated steamboat sinking. Although Lee couldn’t swim, he immediately began rescuing passengers from the steamboat by transporting them to shore on his motorboat. He worked tirelessly long through the night to rescue as many of the boat’s occupants as possible. Tragically, 23 crew members and passengers drowned, but far more lives would have been lost if Tom Lee hadn’t taken it upon himself to rescue as many people as possible. Tom Lee passed away from cancer in 1952, but his memory is honored by Tom Lee Park in Memphis, Tennessee, which overlooks the Mississippi River. The park features a memorial plaque describing Lee’s heroic actions, and it features a bronze statue in his likeness. 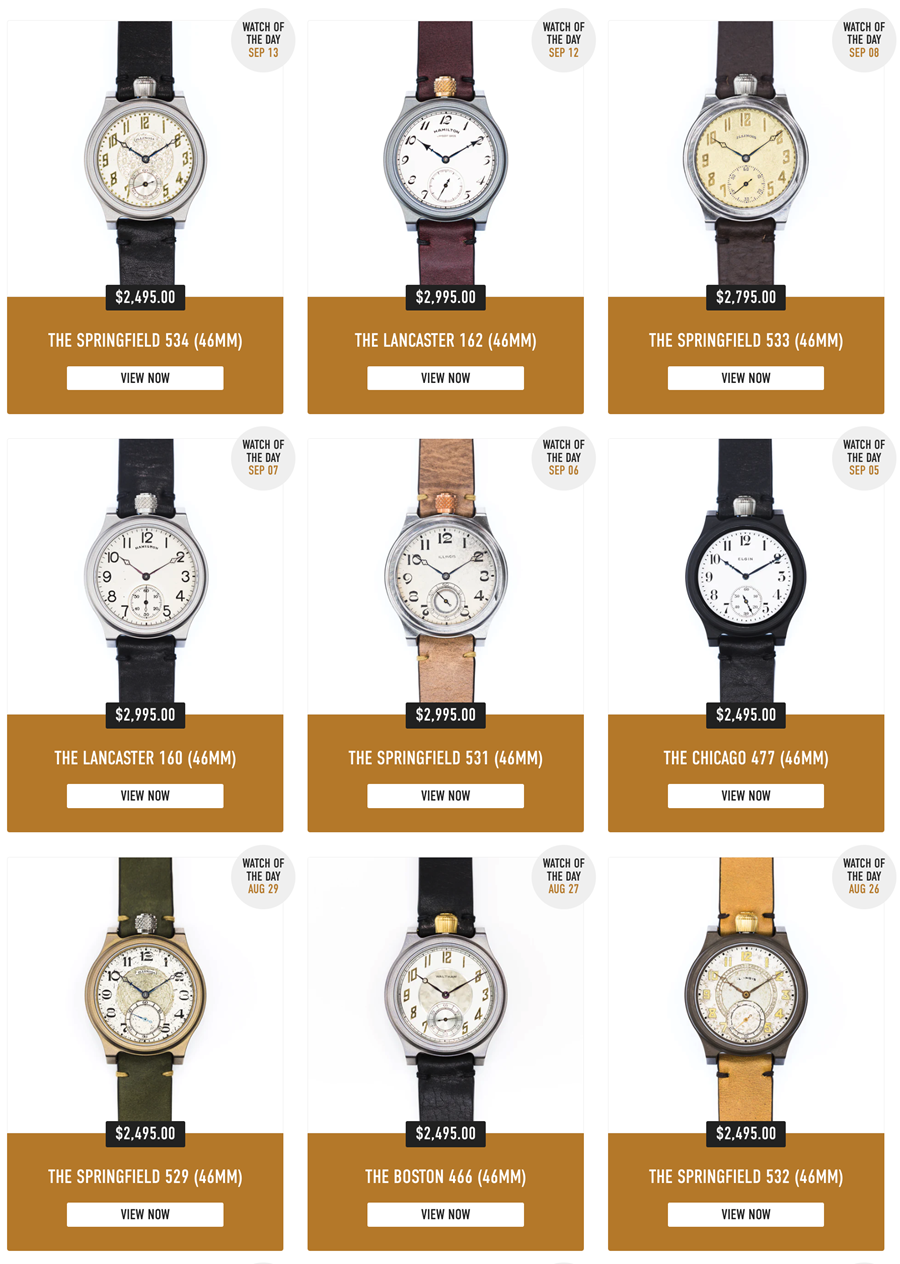 We have the most inventory we've ever had in one place and it's all available at www.vorticwatches.com/watches! Don't forget that each piece is unique, so when it sells, it's gone! We're stocking up for the Holiday Season, but we expect them to go fast!

Check Out All The Watch Of The Day Watches Here