Do You Have A Gift For Dad?

Win a Watch for Dad!

A few times a year we participate in sweepstakes to give you all the opportunity to win a gift card towards a watch of your choice from our Watch of the Day program. See the information below!

Did You Catch Episode #6?

Did you get a chance to watch episode #6 of Custer & Wolfe, Building a Watch Company?  This time we focus on the core of our business: preserving American history through vintage pocket watch restoration and revitalization. 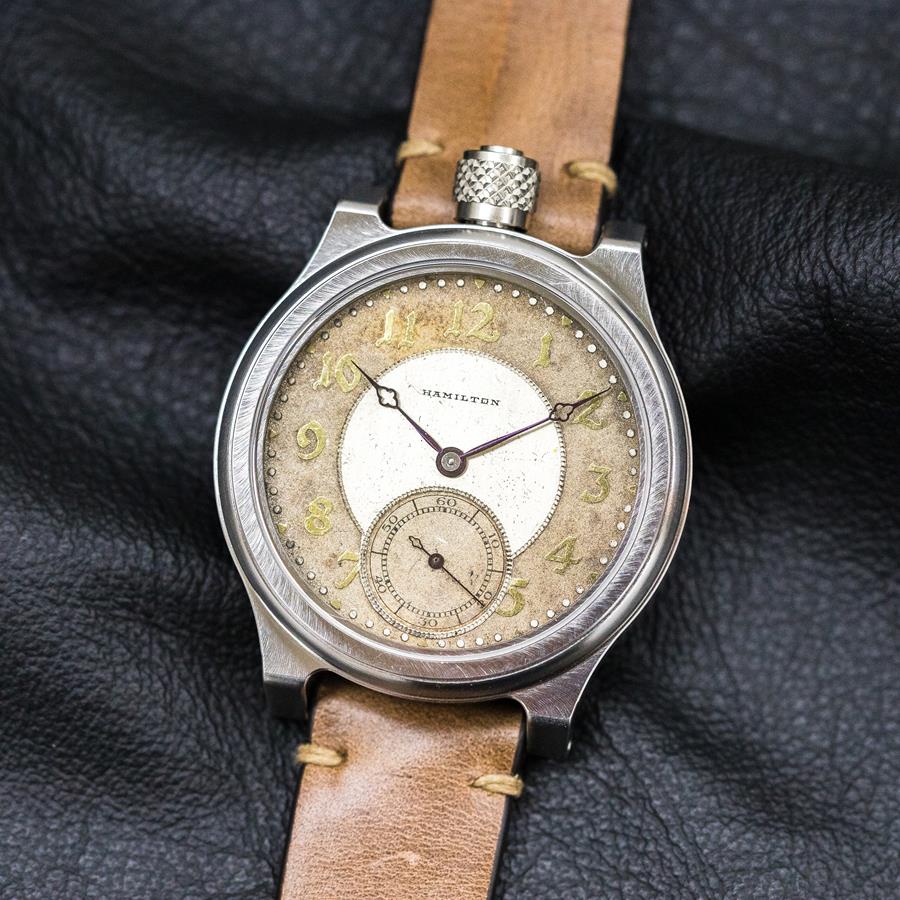 Today, we’re thrilled to present this historic watch originally manufactured by the Hamilton Watch Company in 1928 — the Lancaster 140. This watch boasts a unique, antique dial with a white center and an aged brown background underneath its dark-gold-colored numerals. The watch also features violet, Gothic hands that look stunning underneath its “Hamilton” label. We encased this breathtaking piece within our Machined Titanium case and equipped it with a nickel-plated crown.

The open back of the watch reveals its remarkable 912-grade open-face movement with a reed regulator, nickel finish, pendant setting, and black inlay color. You can also view the watch’s robust and luxurious gold-plated gears powered by 17 screw-set jewels throughout its ¾ plate. To top it all off, we equipped this marvelous timepiece with our comfortable, artisan-designed Natural leather watch strap.

The Hamilton watch company initially produced the Lancaster 140’s pocket watch in 1928 — the same year that American accountant Walter E. Diemer invented bubble gum. Diemer worked as an accountant for the Fleer Chew Gum Company when he created a new recipe of gum that was stretchier and less sticky than regular gum, enabling chewers to blow bubbles. The bubble gum — which Fleer president labeled “Dubble Bubble” — was an instant success and dominated the bubble gum market until Bazooka created its iconic bubble gum in 1947. 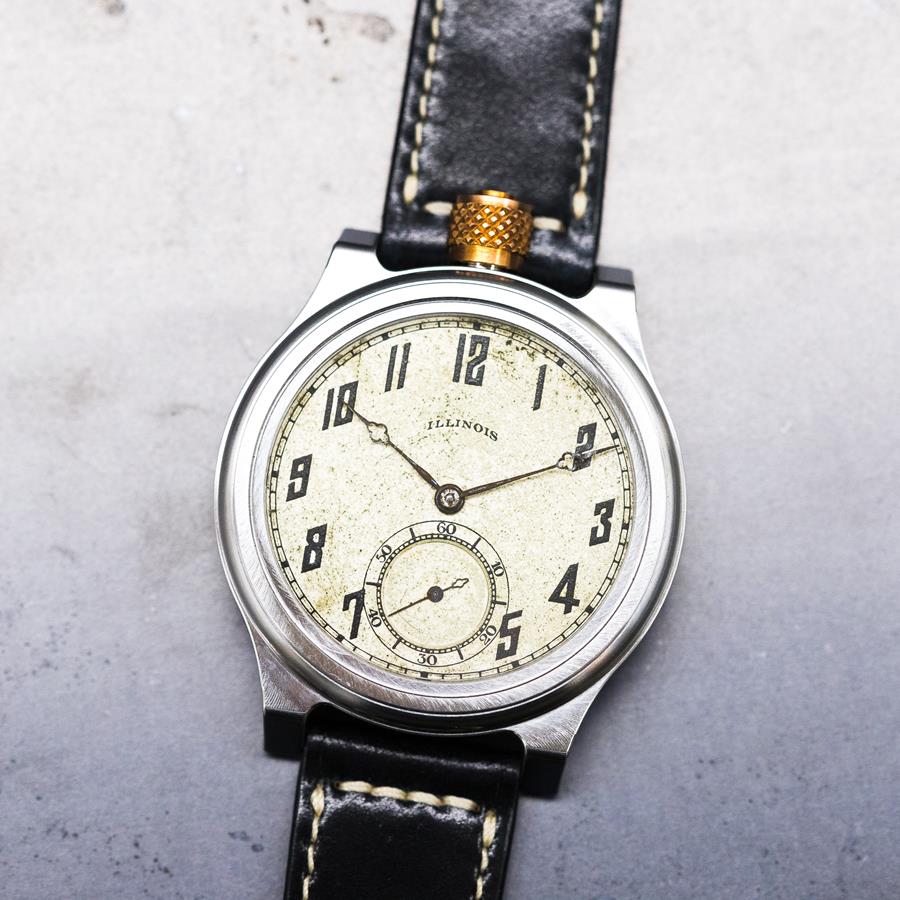 We're pleased to present this remarkable piece originally manufactured by the Illinois Watch Company almost a century ago — the Springfield 503. The Springfield features an antique dial with dark, stylized numerals and rustic hour and minute hands. We encased the original pocket watch within our gleaming, scratch-resistant Machined Titanium case, drawing further attention to the piece's historic, cream-colored background. We also equipped the watch with an eye-catching copper crown.

The back of the watch has a 405-grade open-face movement with a going barrel, nickel finish, and pendant setting. Additionally, you can view the timepiece's robust bronze-plated gears powered by 17 luxurious jewels throughout the movement's center bridge plate. To tie the piece together, we matched it with our hand-crafted Cordovan Black leather watch strap, adding even more style to the final product.

The Illinois Watch Company initially produced the historic pocket watch in Springfield, Illinois, in 1923 — the same year that the iconic musician Louis Armstrong made his first studio recordings. Armstrong's first studio session was with his mentor Joe "King" Oliver, an experienced cornet player and band leader. Electrical recording wasn't invented until 1926, so Armstrong and Oliver's band made their early recordings by playing acoustically into a funnel that was connected to the needle of a phonograph. Armstrong played so loudly during the session that he had to stand fifteen feet away from the rest of the band. Otherwise, he completely hid the sound of Oliver's cornet. 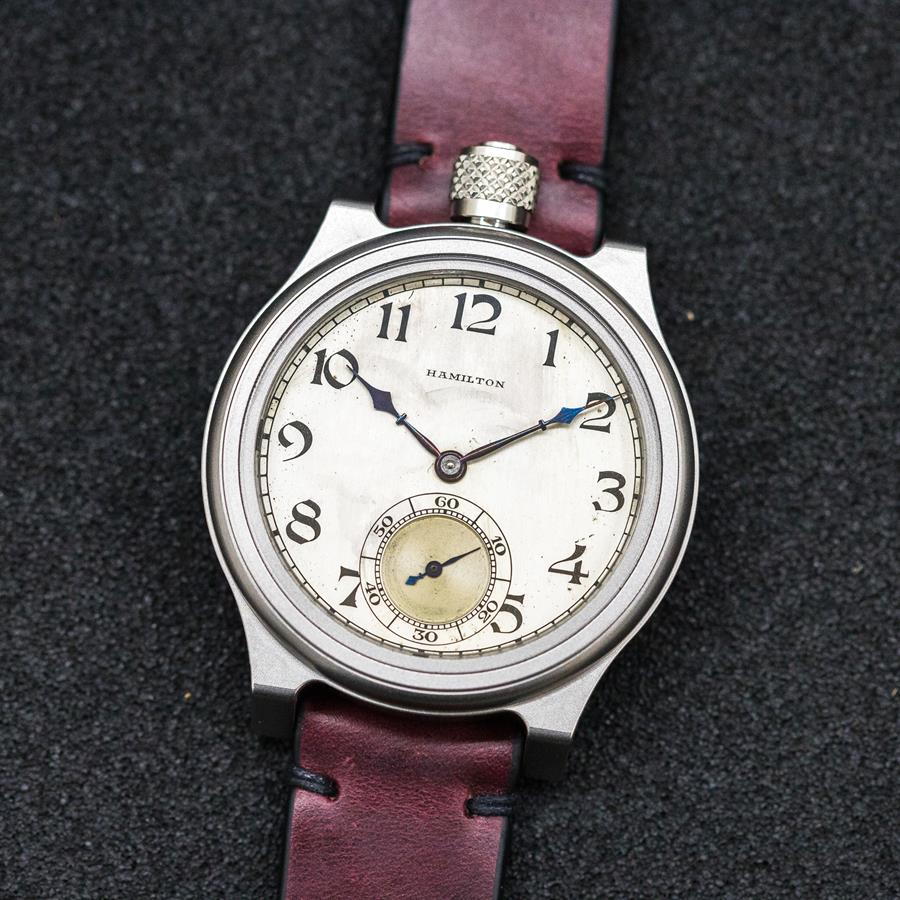 We're excited to showcase this luxurious and stylish piece originally manufactured by the Hamilton Watch Company — the Lancaster 145. Initially produced in 1935, this stunning timepiece features dark numerals that display pleasingly against the light-cream-colored dial. The watch's dial also has breathtaking merlot hour and minute hands. We matched Hamilton's original pocket watch with our robust and scratch-resistant Machined Titanium case and nickel-plated crown, adding even more glimmering elegance to the watch's design.

Our Machined Titanium case boasts a transparent back, enabling watch enthusiasts to view this piece's remarkable inner workings. You can view the timepiece's 912-grade open-face movement with a nickel finish, pendant setting, and black inlay color. The watch's back also boasts luxurious gold-plated gears powered by 17 screw-set jewels throughout its ¾ plate. To top it all off, we equipped the watch with our comfortable and stylish Merlot leather watch strap that pairs perfectly with the hour and minute hands.

The Hamilton Watch Company originally manufactured the Lancaster 145's pocket watch in 1935 — the same year that Gottfried Krueger Brewing Company and the American Can Company debuted the first canned beer. The American Can Company initially attempted to produce canned beer in 1909, but they were unsuccessful. In 1933 — the same year that prohibition ended — the company created a pressurized can and a coating that prevented beer from experiencing a chemical reaction with the tin material.

Canned beer was an immediate success, and the American Can Company and Gottfried Krueger Brewing Company sold more than 200 million cans when they became available to the public in 1935. During World War II, the invention became an overwhelming success because brewing companies could ship beer overseas to US soldiers. 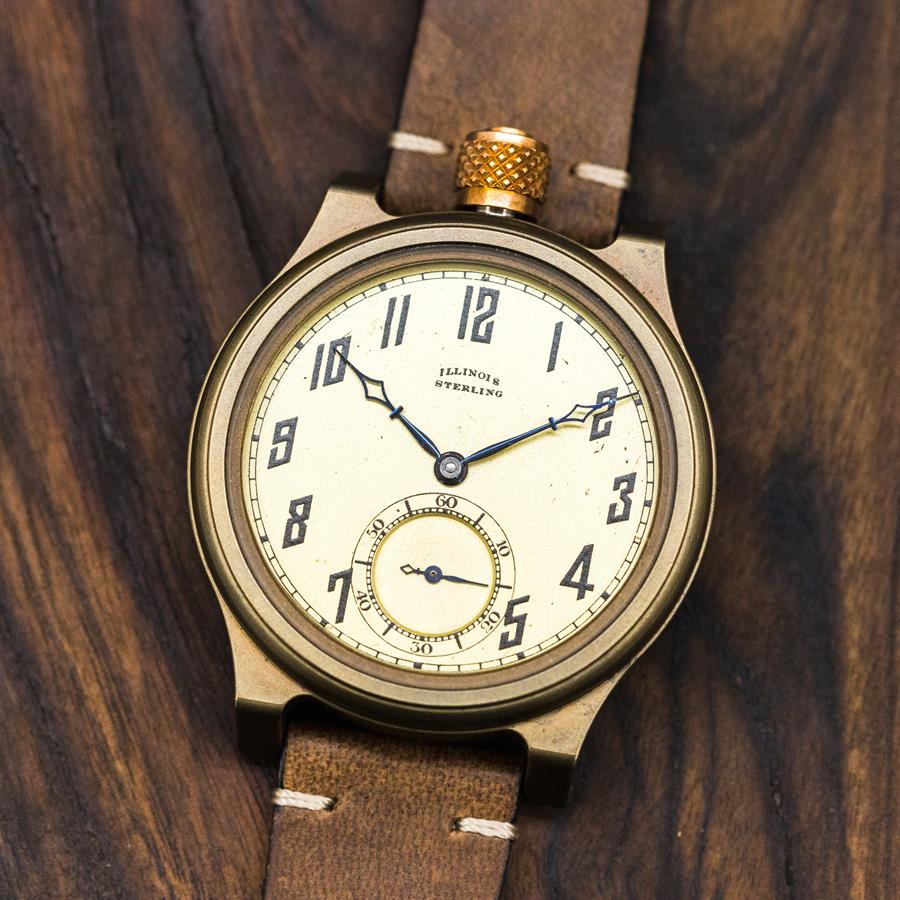 We’re pleased to showcase this antique and stunning piece initially manufactured by the Illinois Watch Company in 1925 — the Springfield 500. The original pocket features an elegant yet simple dial with stylish black numerals atop its cream-colored background. Its royal blue hour and minute hands glimmer vividly against the distinct and tasteful background. We encased the Illinois Watch Company’s original pocket watch within a solid bronze case and added a copper crown, which adds to the piece’s highly unique color design.

On the back of the watch, you can view its 405-grade open-face movement with a going barrel, and a center bridge plate. This pocket watch was originally adjusted to three positions, however, we have regulated it to our standard of six positions. The watch’s rear also features a stylized “Sterling” engraving along with the “Illinois Watch Co.,” and it boasts bronze-plated gears powered by 17 opulent jewels. Finally, we equipped this sophisticated piece with our hand-crafted Natural leather watch strap along with a solid bronze buckle, tying the final design together perfectly.

The Illinois Watch Company originally produced the Springfield 500’s pocket watch in 1925 — the same year that the Louisville-based newspaper The Courier-Journal held the first National Spelling Bee in the United States. Frank Neuhauser won the first national competition with the word “gladiolus.” The National Spelling Bee has taken place every year since its inaugural competition except for 1943-1945 due to World War II and 2020 because of the COVID-19 pandemic. Although the Spelling Bee typically only has one winner, in 2019, the event exhausted its list of challenging words, and the judges declared eight winners. 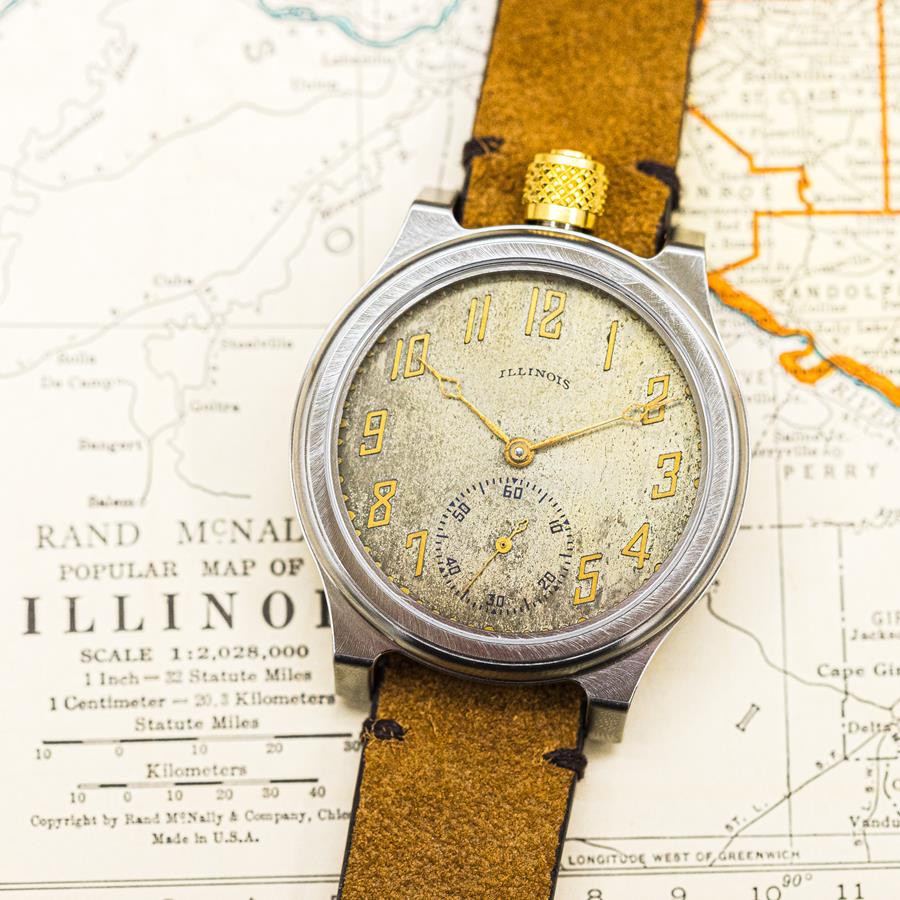 We’re happy to present you this breathtaking timepiece initially produced by the Illinois Watch Company — the Springfield 498. The pocket watch features an antique, rustic dial that reinforces the piece’s historicity. It boasts an aged, cream-colored background with gold-colored watch hands and numerals. We paired this piece of history with our robust and scratch-resistant Machined Titanium case, which draws further attention to the watch’s one-of-a-kind dial. We also paired it with a gold-plated crown that matches its numerals and hands.

The back of the watch features an A. Lincoln-grade open-face movement that was originally adjusted to five positions, a going barrel, and a center bridge plate. The piece also boasts bronze-plated gears powered by 21 sumptuous jewels. To top it off, we matched the timepiece with our Mojave leather watch strap, making the antique piece look even more stunning.

The Illinois Watch Company originally manufactured the Springfield 498’s pocket watch in Springfield, Illinois, in 1922 — the same year that Robert J. Flaherty created the groundbreaking documentary Nanook of the North. The film captures the daily life of an Inuit family in the Canadian Arctic. Although the film has received criticism for containing staged sequences, Nanook of the North is considered the first commercially successful feature-length documentary, and it was one of the first films that the Library of Congress preserved in the United States National Film Registry. 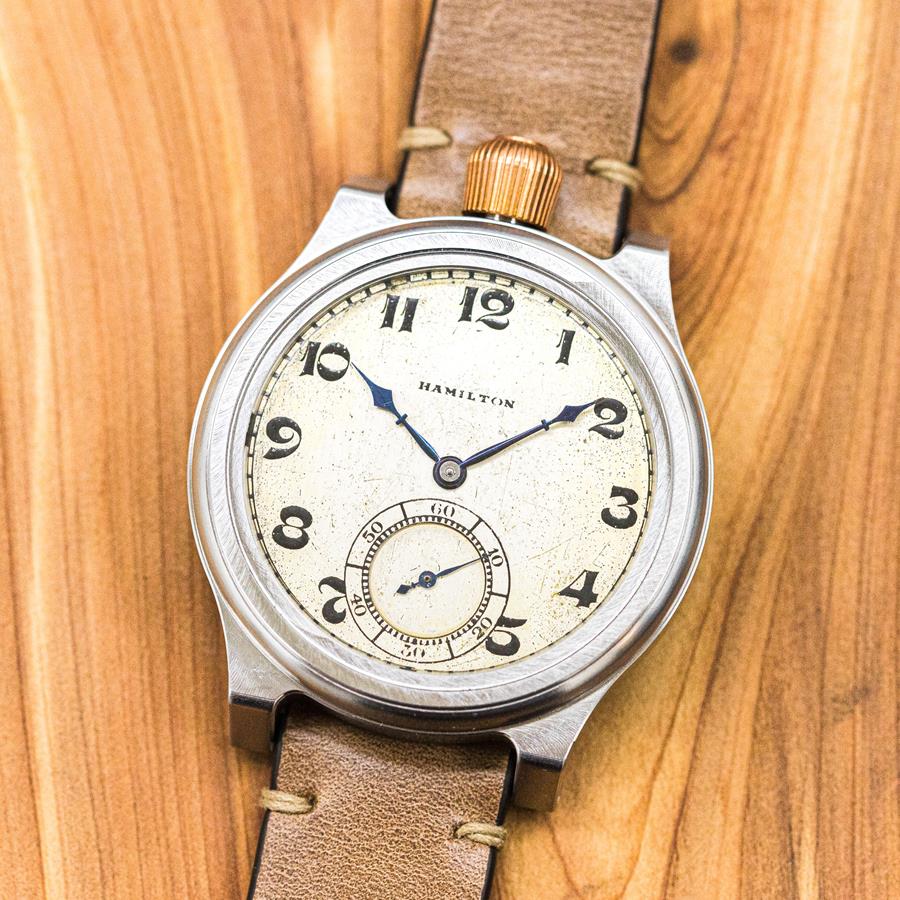 We're thrilled to showcase this elegant piece of history originally manufactured by the Hamilton Watch Company in 1927 — the Lancaster 146. The watch's dial features notably bold black numerals atop its rustic, cream-colored background, and it boasts stunning dark royal blue watch hands. We encased the original antique pocket watch within our stylish and robust Machined Titanium case, and we paired it with a copper crown. The glimmering case and crown add even more sophistication to the final one-of-a-kind piece.

The back of the watch features a 912-grade open-face movement with a nickel finish, black inlay color, and pendant setting. You can also view the timepiece's breathtaking gold-plated gears powered by 17 jewels throughout its ¾ plate. We matched the watch with our handcrafted Natural leather watch strap, adding to the timepiece's rustic charm.

The Hamilton Watch Company produced the original pocket watch in Lancaster, Pennsylvania, in 1927 — the same year that the United States passed the Radio Act, establishing the Federal Radio Commission (FRC). The FRC served as the precursor for the Federal Communications Commission, and its main function was to regulate radio broadcasts. The FRC created a standard for radio stations to be "in the public interest, convenience, or necessity."