Do You Know Any Watchmakers?

Do You Know Any Watchmakers?

We need a watchmaker to join our team when we move into our new building this summer! Please forward this email to any watchmakers you know or anyone who likes to restore antique and vintage watches! 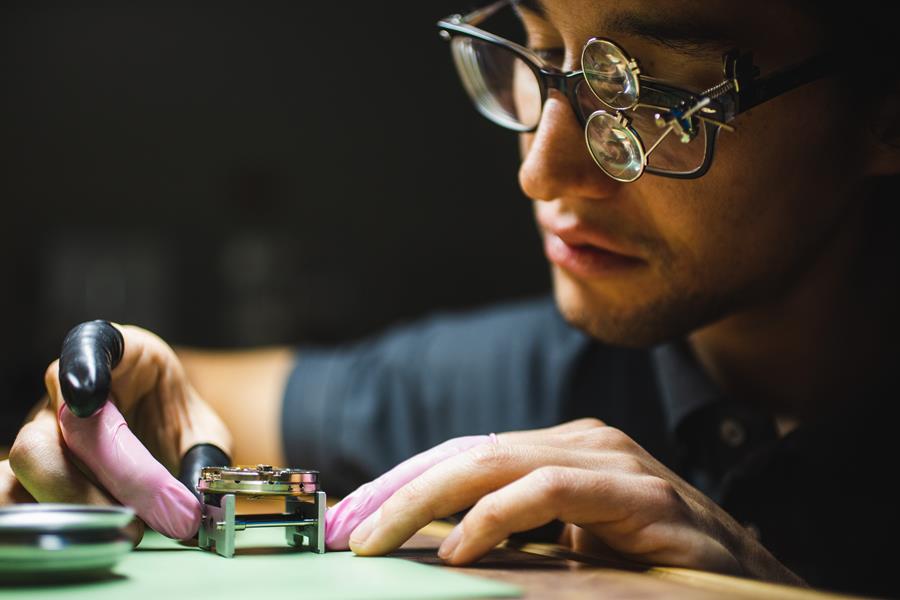 We need certified watchmakers ideally with experience in vintage/antique restoration, but we encourage anyone with any watchmaking (pocket or wristwatch repair) experience to apply. You'd work in our new facility in Fort Collins, Colorado when it opens! 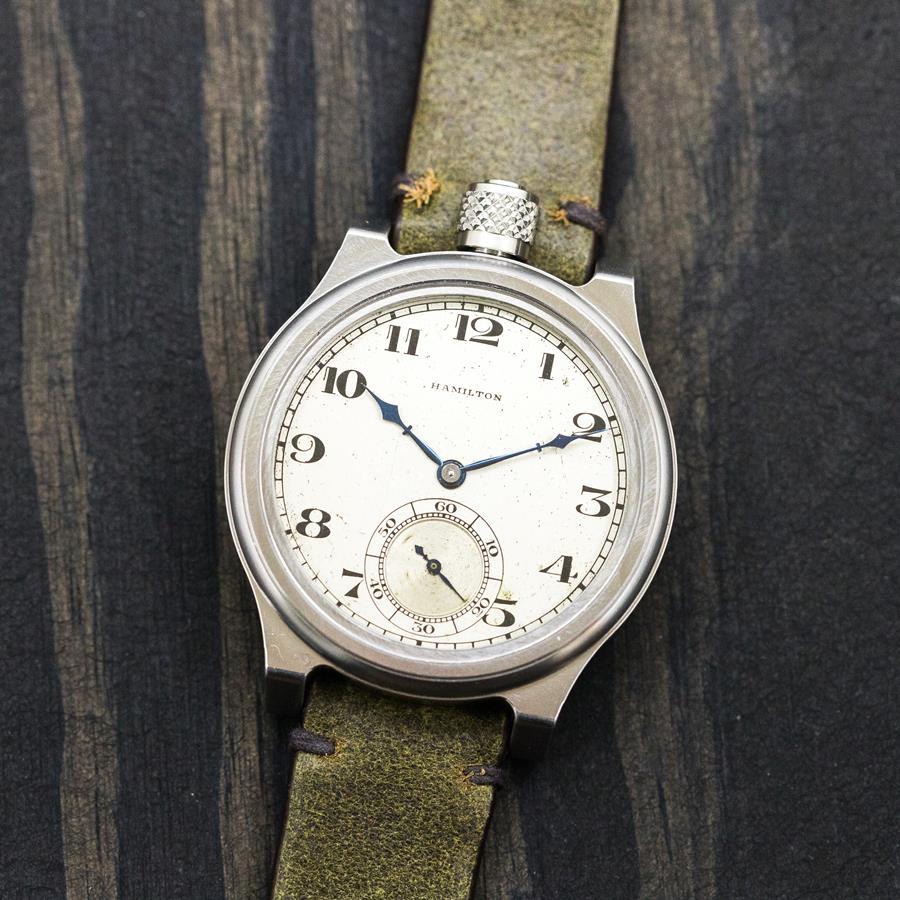 Today, we are excited to showcase this remarkable watch from the Hamilton Watch Company — the Landcaster 129. This piece features a classic Hamilton watch dial with art deco-style numbers and a luminous sub-dial. Some subtle aging, taking the form of black flecks, adds character to this piece and will remind its owner that they are wearing a piece of history. We love the stark contrast between the white dial and the cobalt blue hands, and our Machined Titanium case only adds to the watch’s luster.

This 17-jewel piece is protected by our highly durable and scratch-resistant case, which lets you see through the clear back at the gold-plated gears. The curved shape of the bridge plate contrasts the machined lines that run diagonally across the plate, giving this 916-grade piece a truly remarkable design. Lastly, our Olive Leather strap brings out the earthy tones of the dial.

This watch was originally produced in Lancaster, Pennsylvania, in 1927 — the same year the Great Mississippi Flood submerged more than 23,000 square miles of land in standing water. After several months of consistent rain, the water levels of the lower Mississippi River steadily rose, eventually breaking levees and flooding the surrounding areas. In 1929, Kansas Joe McCoy and Memphis Minnie released the song “When The Levee Breaks,” inspired by the Great Mississippi Flood. 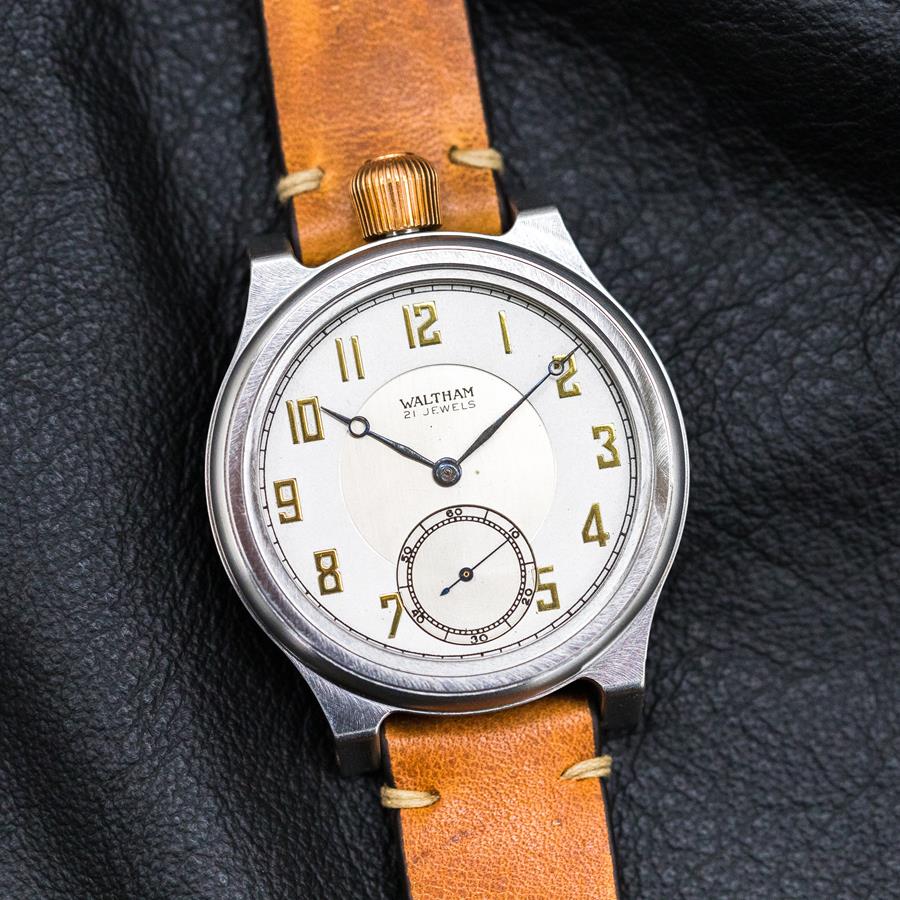 We are thrilled to present the incredible Boston 435, originally manufactured by the American Waltham Watch Company. This piece is in superb condition and invokes a timeless, classic appeal paralleled by no other. Our Machined Titanium case beautifully encapsulates the clock dial and accentuates the modern, gold-type numbers. Paired with our Tobacco leather strap, this watch appears luminescent, casting off a golden glow.

And, if that isn’t impressive enough, one look at the dial will tell you this watch is powered by 21 jewels, each screw-set with brass hardware. Flip the watch over, and you’ll see the gold-plated gears hard at work and a beautiful inscription on the bridge plate — ”Waltham U.S.A Riverside.” If you look closely, you can see the bridge plate is also adorned with machined curved patterns, which will catch your eye in the light.

This watch was originally produced in Waltham, Massachusetts, in 1935 — the same year Disney released the first technicolor Mickey Mouse film, titled “The Band Concert.” This animated film pictures Mickey Mouse conducting an orchestra when suddenly, a tornado sweeps through the symphony hall, carrying the orchestra away. Later in 1994, it was voted as the third-best cartoon in history. 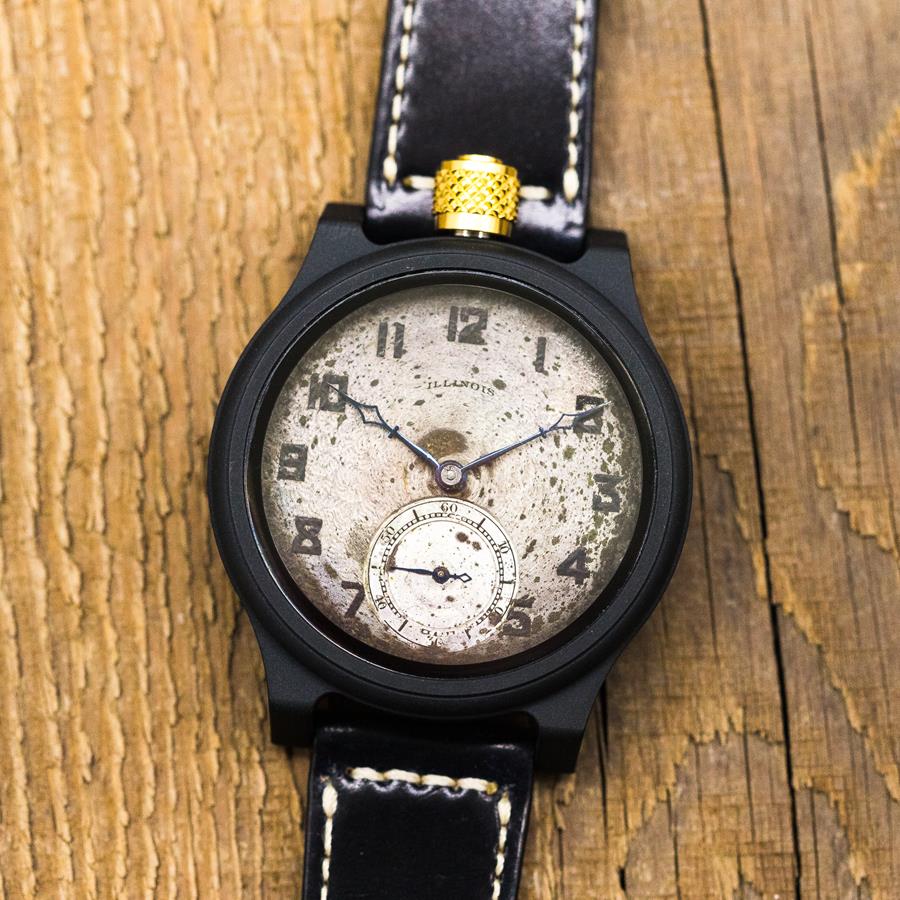 We are pleased to present the absolutely stunning Springfield 483 from the Illinois Watch Company. One of the most rewarding aspects of restoring antique pocket watches is to discover old pieces such as this that have such an incredible visual story that truly shows their age. The dark patterns of wear that come through on this dial will beg you to lean in for a closer look and ponder the journey this watch has taken over the years. We kept the dark motif by casing this watch in our black DLC titanium, as well as a black cordovan strap. Gold hardware throughout brings the extra attention to the small details and really sets this watch over the top.

As if that wasn't enough to entice you, we turn this watch over to reveal the movement within and are taken aback by this gorgeous 21 jewel display within this Illinois 274. All the jewels have been screw-set with brass hardware throughout, pairing well with the brass balance wheel and gold-plated gears beneath. We love this uniquely shaped build plate that accentuates the many curves and patterns that have been machined onto it.

This watch was originally produced in 1926 in Springfield, Illinois by the Illinois Watch Company. In August of this same year, the very first weather map was televised, from the NAA Arlington to the Weather Bureau office in Washington, D.C. 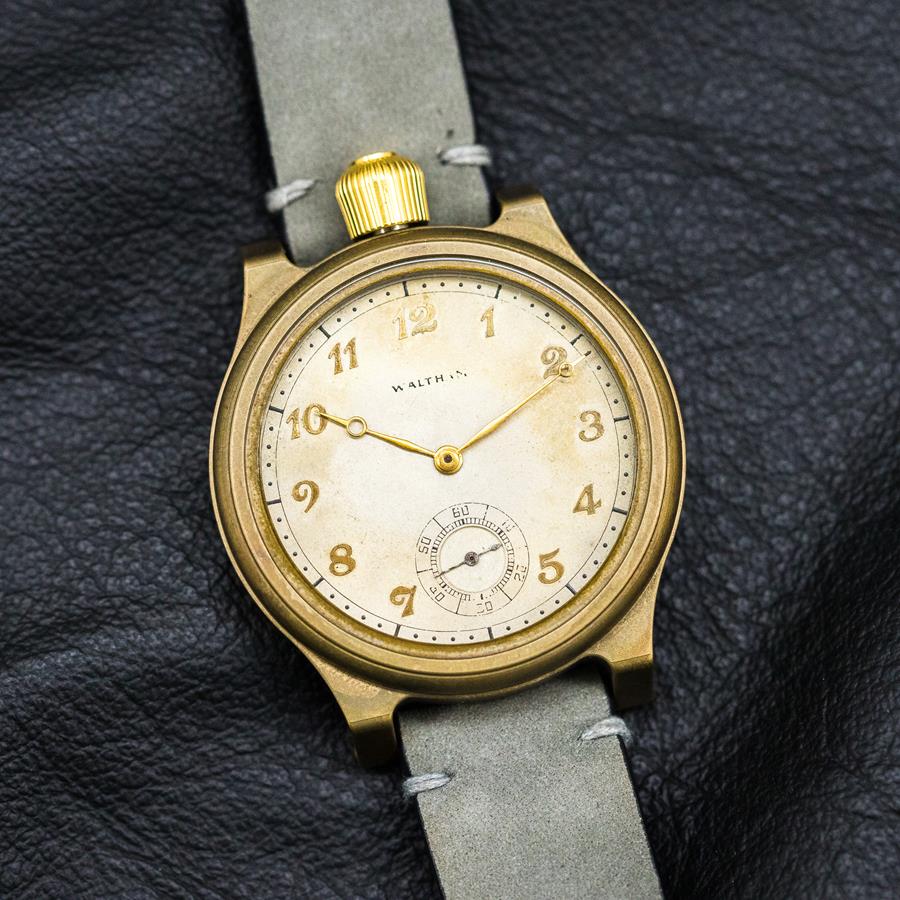 We are excited to introduce this spectacular piece from the American Waltham Watch Company — the Boston 433. Originally manufactured in 1924 by Waltham, the Boston 433 features an alabaster watch dial, gold-type numbers, and a clear back, revealing the intricate gold-plated gears brass balance wheel. The gilded hands accentuate the gold-type numbers magnificently. Our bronze case with a custom-aged patina case adorns this aurous timepiece even further, complementing the whimsical type numbers.

Powered by 17 jewels, this Royal-grade timepiece has an incredibly durable and scratch-resistant coating. Lastly, our Stone leather strap brings both unity and contrast to this beautiful piece. This watch was originally produced in Waltham, Massachusetts, in 1924 — the same year that Carl R. Taylor patented the first ice cream cone-rolling machine in Cleveland, Ohio. Having applied for the patent on February 16th, 1921, it took Carl a little more than 2 years and 11 months to obtain and successfully use the patent. 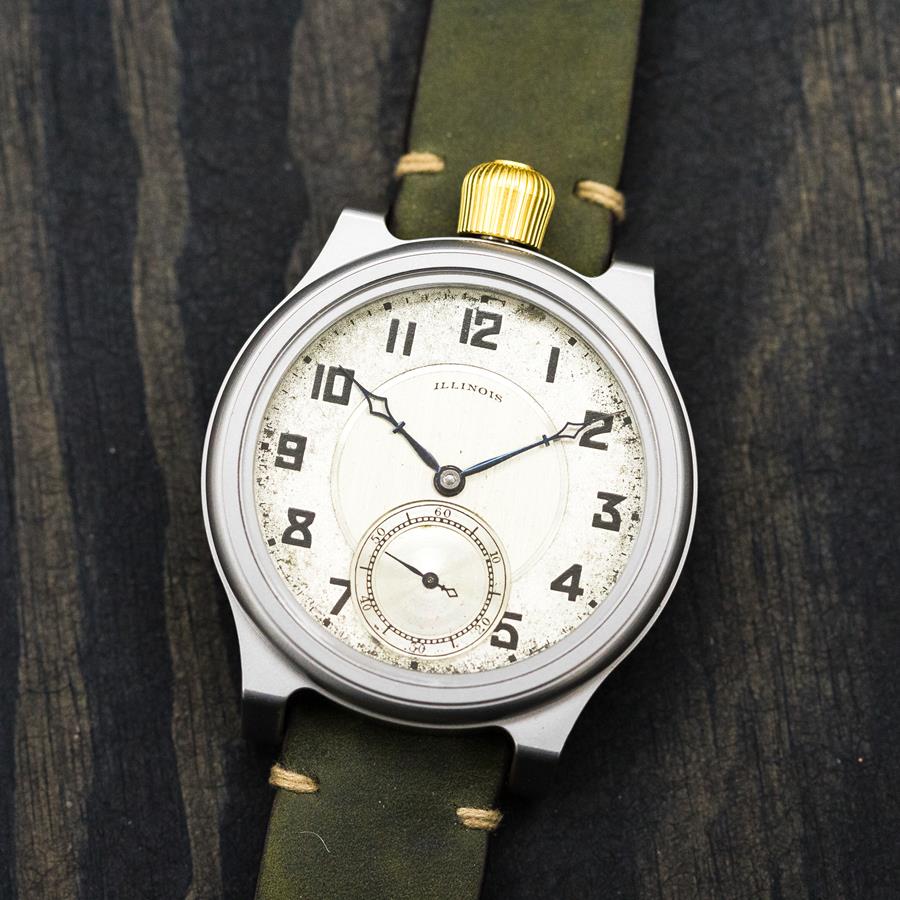 We are proud to present this remarkable piece from the Illinois Watch Company — the Springfield 473. Originally manufactured in 1923 by the Illinois Watch Company, the Springfield 473 features a classic watch dial design, bold-type numbers, and a clear display case that reveals the intricate stainless steel gears with brass and gold-plated details. The speckled border on the dial accentuates the boldness of the watch, and our Machined Titanium case preserves the history of this truly exquisite piece.

Powered by 19 jewels, this 406-grade timepiece is a modern-day treasure. Lastly, our Olive leather strap brings the whole piece together. This watch was originally produced in Springfield, Illinois, in 1923 — the same year that the WBAP-AM had its 1st broadcast of the “Barn Dance Show” in Fort Worth, Texas. Just 10 days later, Ralph Peer recorded Fiddliní John Carsoní’s “Little Old Log Cabin in the Lane,” which was considered to be country music’s earliest hit. Plus, it proved that country music could sell and there was an audience and market for it!