May Our 4th Episode Be With You!

Have you seen the most recent episode 4 of Custer & Wolfe, Building a Watch Company on YouTube? We've got some exciting stuff headed our way, we can't wait to keep showing you more! 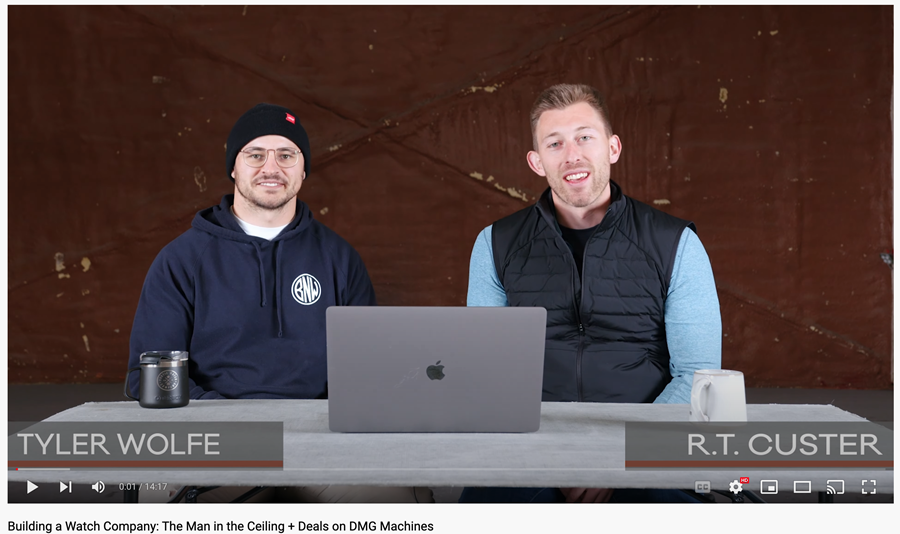 We Need Your Video Skills!

We have been getting some great feedback about our peek behind the curtain and now we need help from you! We are on the search for another awesome videographer to help with all of the content we are creating. Check out the posting for the brand manager; the part we need the most is the video experience! 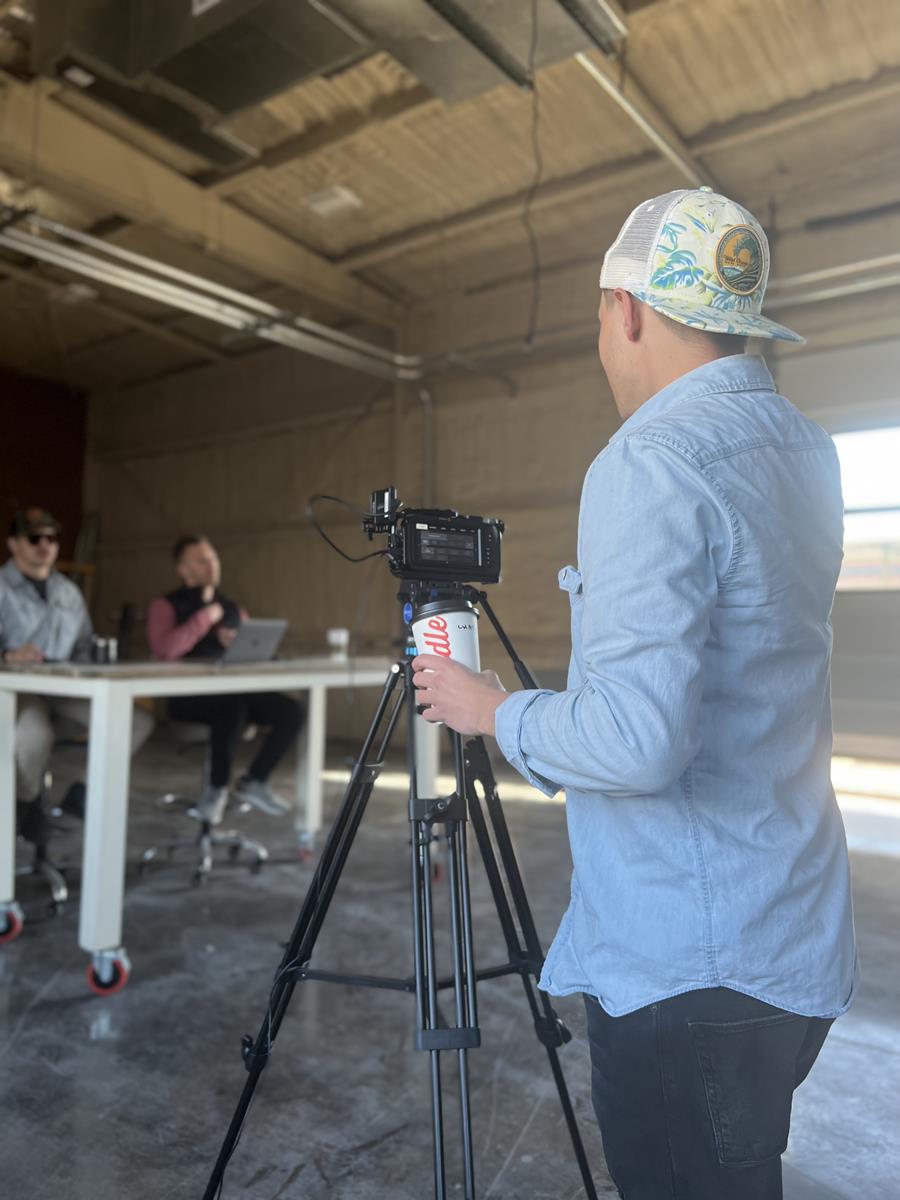 PS - if you are or you know a contract/freelance videographer in Northern Colorado please contact us! We'd love to hire someone full time, but regardless we'll need more video help! 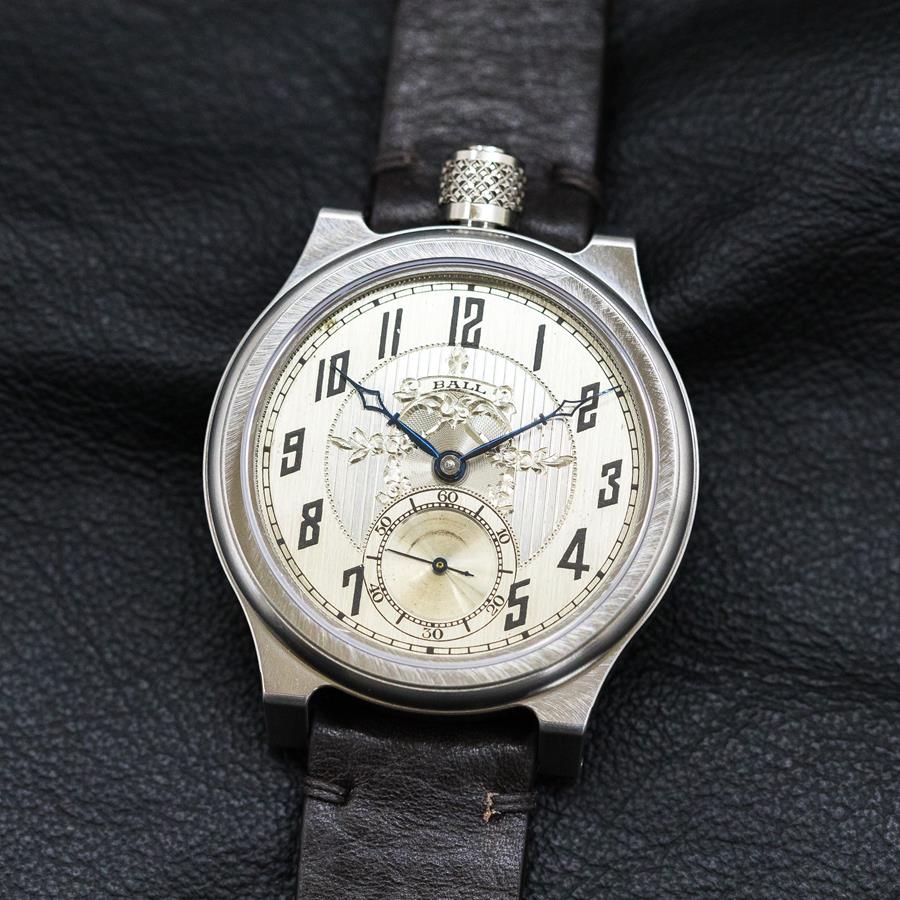 Today, we’re excited to spotlight this sophisticated and historic piece originally manufactured by the Illinois Watch Company in 1926 — the Cleveland 042. The watch features a breathtaking dial with a highly unique and sophisticated center design. The design shimmers brilliantly against the piece’s cream-colored background. The dial also sports dark, stylized numerals and blue hour and minute hands.

We paired the pocket watch with our pristine and scratch-resistant Machined Titanium case along with a nickel-plated crown. The gleaming case and crown make the complete piece shine even more spectacularly. Our Machined Titanium case also sports an open back, revealing a commercial-standard open-face movement nickel finish and circular finish pattern.

This watch was originally produced in 1926 in Springfield, Illinois  — the same year in which Chrysler introduced the iconic and trailblazing Chrysler Imperial. Chrysler developed the vehicle in order to compete with other luxury car manufacturers, including Cadillac and Lincoln. Chrysler equipped the Imperial with a 288.6 cubic inch six-cylinder engine. The vehicle set a transcontinental speed record in 1926 by traveling over 6,500 miles within a week. Chrysler advertisements referred to the vehicle as the “Chrysler Imperial ‘80’,” referencing the vehicle’s ability to travel at 80 miles per hour. 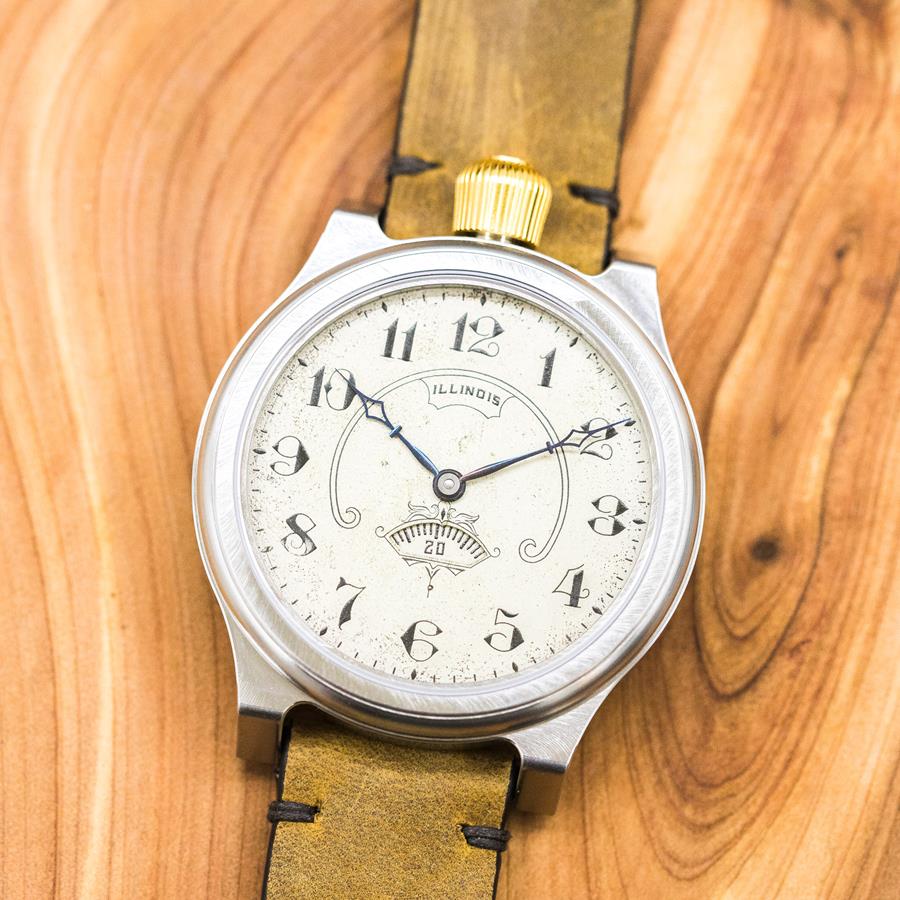 We’re thrilled to showcase this breathtaking piece originally produced by the Illinois Watch Company nearly a century ago — the Springfield 494. The Springfield sports a classically-styled dial, including a spotted, cream-colored background and dark, elegant numerals. The dial also features a unique subdial surrounded by a sophisticated design. We encased this stunning pocket watch inside our robust and scratch-resistant Machined Titanium case, and we added a luxurious-looking gold-plated crown. The case and crown emphasize the watch’s dial and make the complete piece even more remarkable.

The back of the watch features gorgeous bronze-colored engravings that reinforce its historical production, including the “Illinois Watch Co. Springfield” and the “Stanley” trade name. The piece also sports a 406-grade open-face movement with gold-plated gears powered by 19 opulent jewels. To tie the piece together, we paired the pocket watch with our one-of-a-kind Natural leather watch strap, which further adds to the watch’s antique style.

The Illinois Watch Company initially manufactured the pocket watch in Springfield, Illinois, in 1926 — the same year that country and blues musician DeFord Bailey became the first African-American to perform on The Grand Ole Opry radio show in Nashville. DeFord Bailey was known for playing the harmonica and was even called the “harmonica wizard.” His music career spanned two decades, and although he isn’t a household name, his musical influence left a significant impact on the Nashville music industry. In 2005, he was posthumously inducted into the Country Music Hall of Fame. 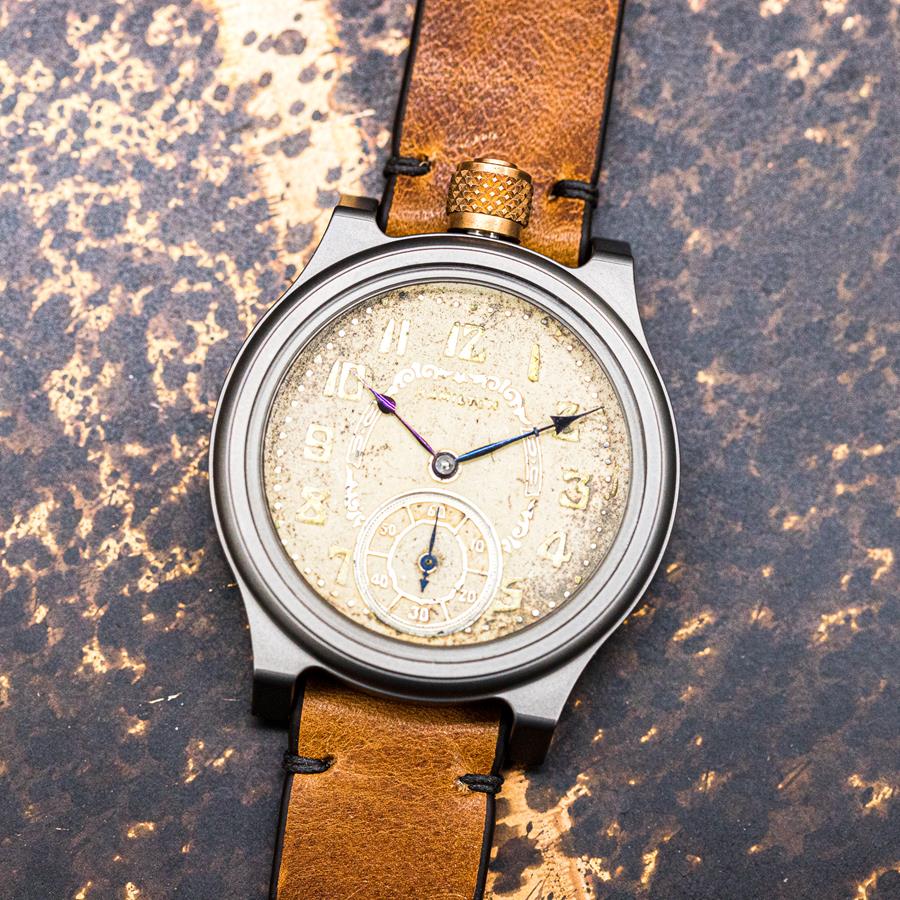 We're delighted to showcase this distinct, antique piece initially manufactured by the Hamilton Watch Company in 1931 — the Lancaster 136. The watch's dial features a cream-colored background with an elegant design underneath its mustard numerals, and the edge of the dial sports stylish white dots. The piece also features a violet hour hand and blue minute hand, which glimmer vividly on top of the historic dial. We paired the original pocket watch with our powerful Gunmetal and copper crown, both of which look stunning with the watch's historic, one-of-a-kind dial. We also equipped the pocket watch with our handcrafted and comfortable Tobacco leather watch strap, which matches the copper crown while emphasizing the piece's antique and rustic style.

The back of the watch exhibits a 912-grade open-face movement with a Reed regulator, gold-plated gears, and 17 sumptuous jewels. The watch also features a historic "Hamilton Watch Co." engraving that corroborates the piece's significant age.

The Hamilton Watch Company originally produced this piece in Lancaster, Pennsylvania, in 1931 — the same year that Starrett Brothers and Eken finished construction on the Empire State Building. The architectural firm Shreve, Land, and Harmon designed the building in the Art Deco style, a common architectural style in New York City at that time. The Empire State Building was the first building to feature over 100 floors, and it was the world's tallest building until 1971, when construction concluded on the Northern World Trade Center tower. 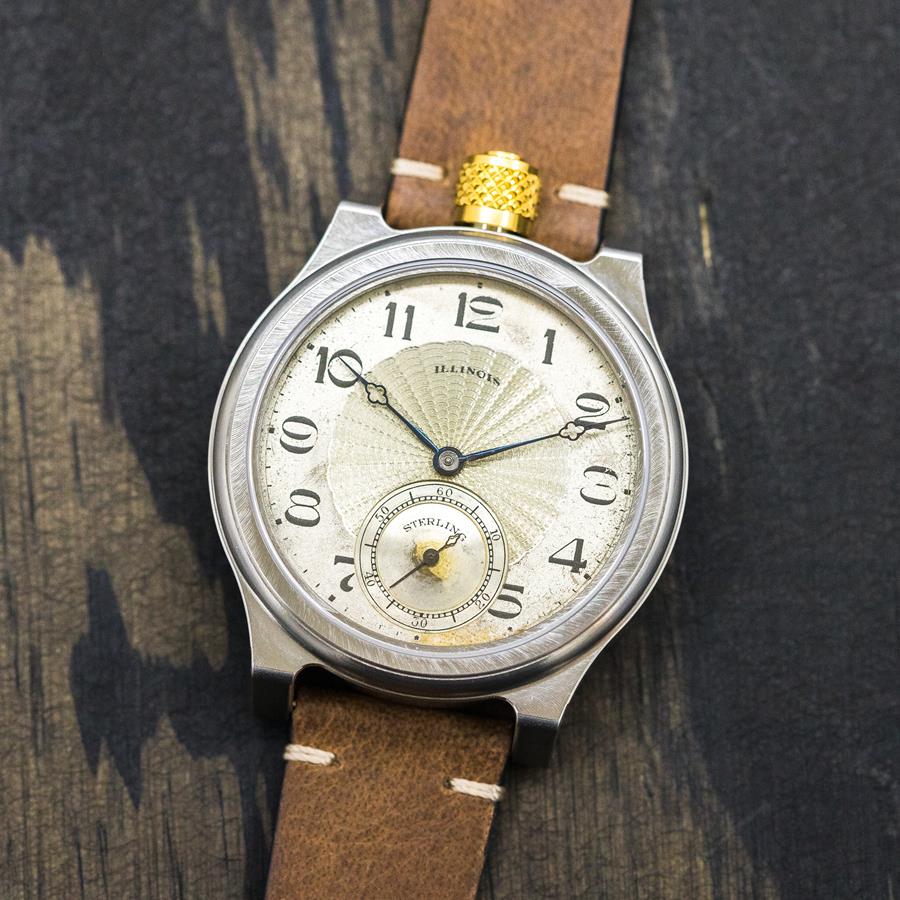 We’re pleased to showcase this historic, one-of-a-kind piece originally manufactured by the Illinois Watch Company in 1926 — the Springfield 495. This luxurious timepiece sports blue hour and minute hands and dark, stylized numerals atop its cream-colored dial. The dial also boasts an antique subdial and an intricate center design that glimmers pleasingly. We brought even more sophistication to the original pocket watch by encasing it in our stylish and scratch-resistant Machined Titanium case, and we equipped the watch with an exquisite gold-plated crown.

The back of our case features a clear display, enabling you to view the watch’s detailed and marvelous components. The watch sports a 405-grade open-face movement with a nickel finish and pendant setting. You can also view the piece’s distinct “Sterling” engraving, indicating that the watch is a Sterling variation. You can also view the Sterling trade name on the watch’s subdial. The watch also includes robust and stunning gold-plated gears powered by 17 opulent jewels atop its center bridge plate. Finally, we paired the watch with our comfortable, artisan-designed Natural leather watch strap, which further emphasizes the watch’s antique style.

The Illinois Watch Company initially produced the pocket watch in Springfield, Illinois, in 1926 — the same year the United States introduced the numbered highway system, paving the way for modern-day travel. When states began implementing the system, many people criticized the use of numbers rather than names. Despite the public’s reservations, the numbered highway system laid the foundation for future travel innovations, such as the creation of the Interstate Highway System in 1956. 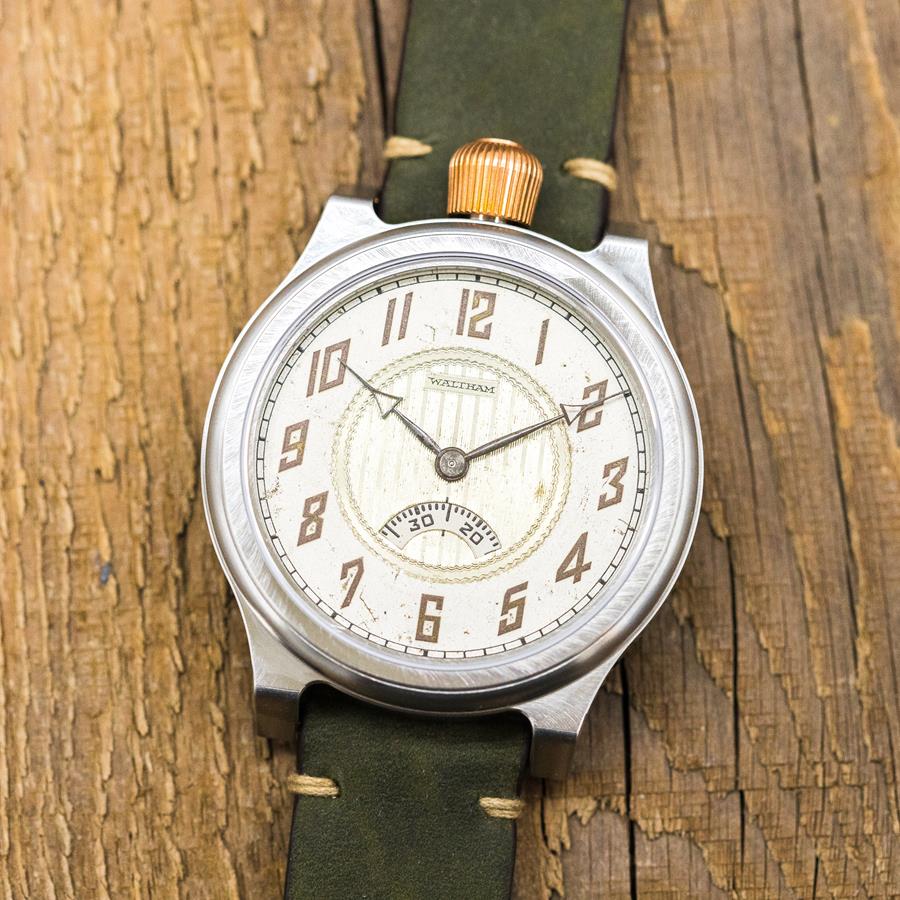 We’re pleased to feature this unique and memorable watch originally manufactured by the American Waltham Pocket Watch Company — the Boston 442. The watch features a distinct dial with a cream-colored background, brown, stylized numerals, and dark-gray hour and minute hands. The dial also sports a breathtaking and elegant center design along with a highly unique subdial. We encased the original pocket watch inside our handcrafted, scratch-resistant Machined Titanium case, and we equipped the watch with a copper crown that matches the dial’s numerals.

On the back of the watch, you can view its intricate inner workings with its 1235-grade open-face movement, Breguet hairspring, and glimmering bridge plate. The watch’s rear also boasts robust, luxurious gold-plated gears powered by 17 vibrant jewels. Finally, we topped the piece off with our artisan-designed Olive leather watch strap.

The American Waltham Watch Company initially produced this piece in Waltham, Massachusetts, in 1929 — the same year in which the Academy of Motion Pictures Arts and Sciences held the first Academy Awards. That year, the films 7th Heaven and Sunrise won the most academy awards with three each, and the film Wings became the first-ever Outstanding Picture award, which is now known as Best Picture. Unlike the contemporary Academy Awards, the Academy announced the Oscar winners three months before holding the ceremony. 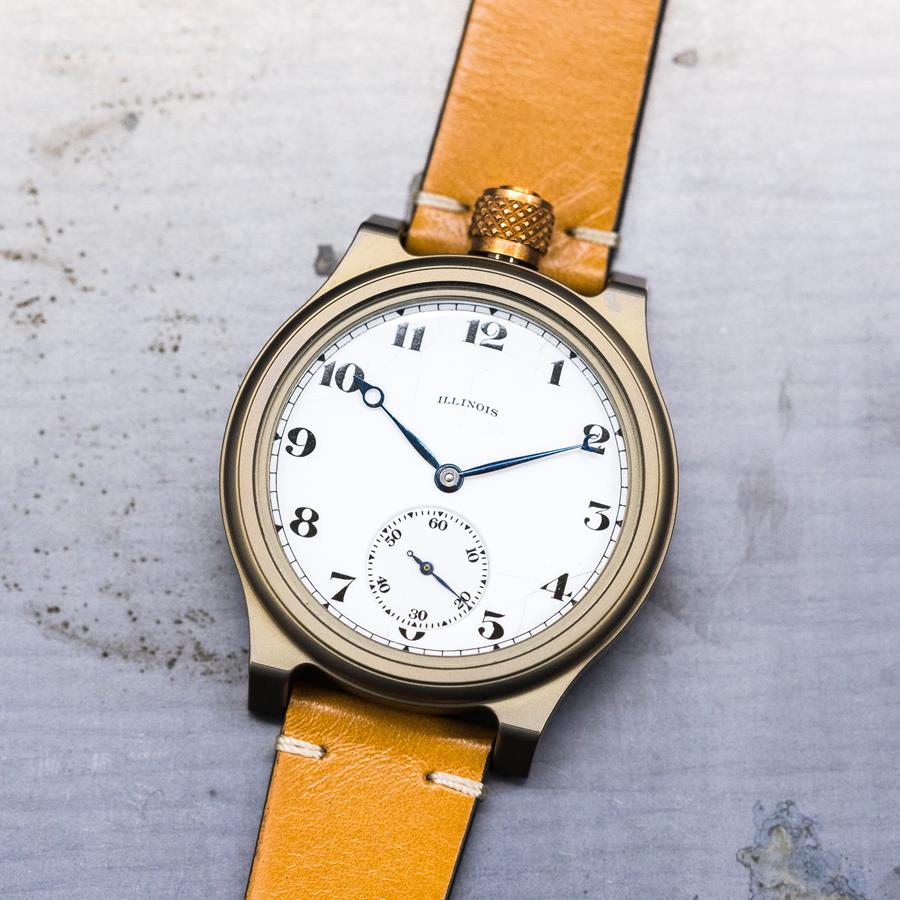 We're thrilled to present this stunning, pristine watch originally produced by the Illinois Watch Company in 1917 — the Springfield 492. The watch's dial boasts a flawless white background with stunning blue hour and minute hands, and the dial also features dark, bold numerals as well as a matching subdial. We paired this antique pocket watch with our PVD Bronze Titanium case and copper crown. The case and crown's rustic colors look gorgeous and emphasize the watch's elegant dial. We also equipped the watch with our handcrafted, comfortable Rye leather watch strap, which matches the copper crown.

The PVD Bronze case features a clear back, where you can see the watch's antique components. The watch sports a 406-grade open-face movement with a nickel finish and pendant setting, and the back also boasts a breathtaking stylized engraving that reads "The Autocrat." Additionally, the watch features gold-plated gears and a center bridge plate showcasing 17 sumptuous jewels.

The Illinois Watch Company initially manufactured the pocket watch in Springfield, Illinois, in 1917 — the same year that the United States officially declared war on Germany and entered World War I. The United States' involvement in World War I significantly increased our military capabilities. In 1917, the US army only had around 133,000 people. On May 18, Congress introduced the Selective Service Act, which drafted around 2.8 million people into the military. Additionally, two million Americans volunteered for the conflict.