Need a reason to go to Steamboat this weekend?

Your Weekly Roundup with a Chance to See Us!

Your weekly roundup is below, but first, we wanted to let you know that we will be in Steamboat Springs this weekend! 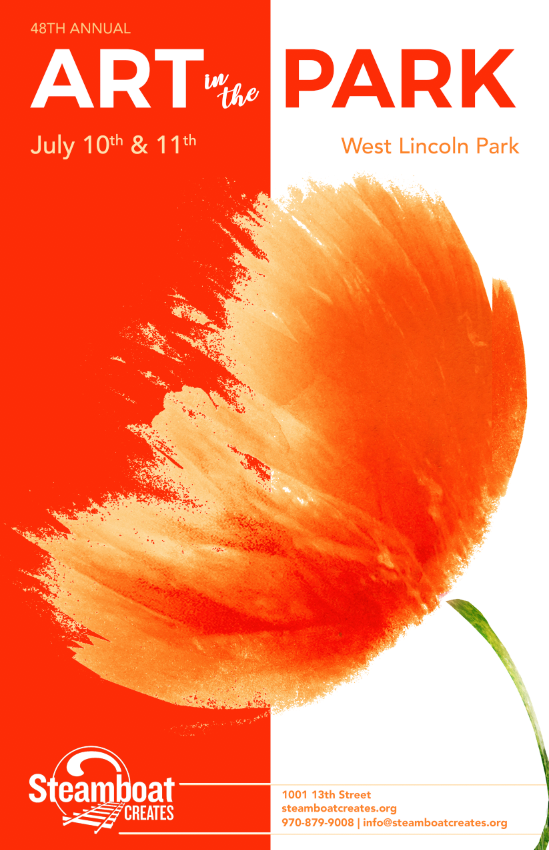 Have you been looking for an opportunity to try on a Vortic in person? Here's your chance!

Join us this weekend in Steamboat Springs for a colorful scene at Art in the Park, where arts and crafts, performances, and an interactive children’s area will fill your day. Bring the whole family! Art in the Park is free to the public and features nearly 150 artist vendors, live entertainment, food vendors, and an interactive children’s art area.

For additional info including location and times, please click the button below.

Art in the Park Event Info!

Check out the images below for the Weekly Roundup of last week's Watch of the Daywatches!

Click the images of the watches to learn more about them.  Make sure to check the website at 12 PM Mountain Time for the Watch of the Day! They sell quickly. This week we have five watches queued up. Keep your eyes out for the perfect watch for you! 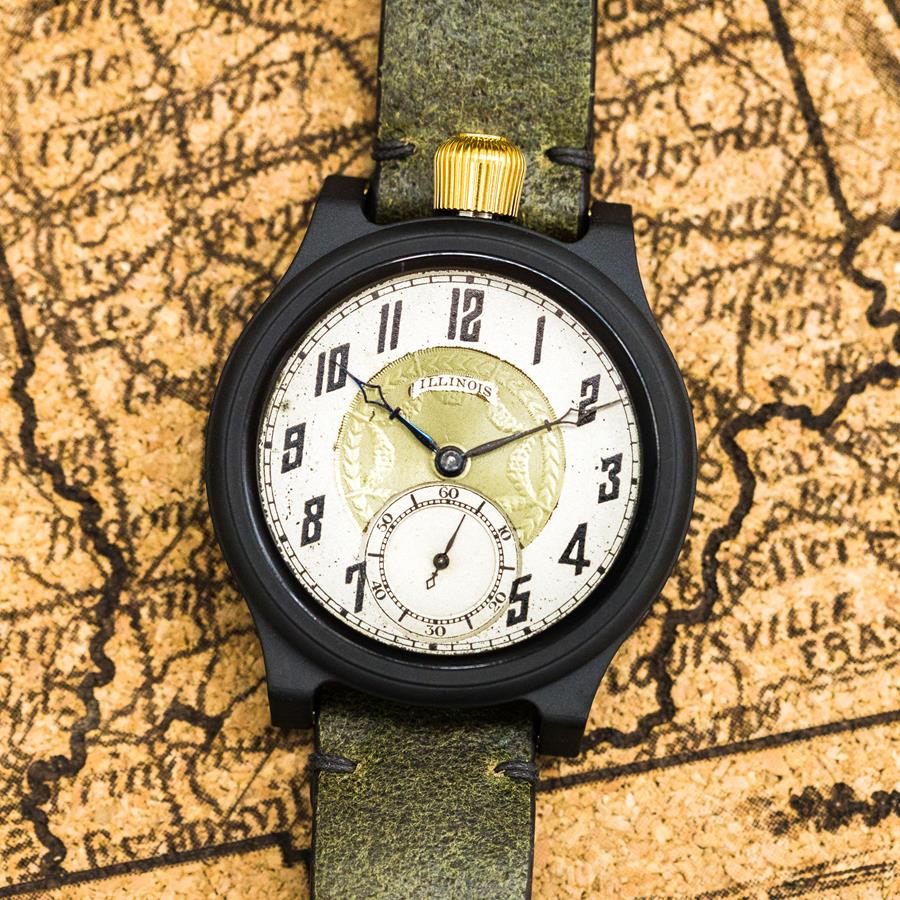 Today we bring you this wonderful timepiece from the Illinois Watch Company, the Springfield 413. With so many unique watches that we work with every single day, we like to take the extra time and let the watch really speak to us. Often we find that the look and feel of the final product practically falls in place effortlessly. The design elements of this watch go so well together that we catch ourselves staring, and could not be happier with the result. This very unique double sunk dial has such character in the center with the ornate designs and the perfect amount of wear and age around the edges.

We love the balance of visual weight from the bold dark numerals and case, with this soft white dial face background. The gold accents in the center are carried throughout with this gold-plated crown and hardware. Our marsh green strap ties the whole thing together nicely, completing the feel of this watch. The movement inside is one of our favorite models from Illinois, the Autocrat. With 17 screw-set jewels, accented by stainless steel hardware all across the ¾ bridge plate.

Rose gold gears match the copper inlay lettering, complemented with an incredibly intricate spiral design. This watch was originally manufactured in 1925 in Springfield, Illinois. This same year, the very first National Spelling Bee was held in Washington D.C. and is still to this day the longest-running not-for-profit educational promotion program. 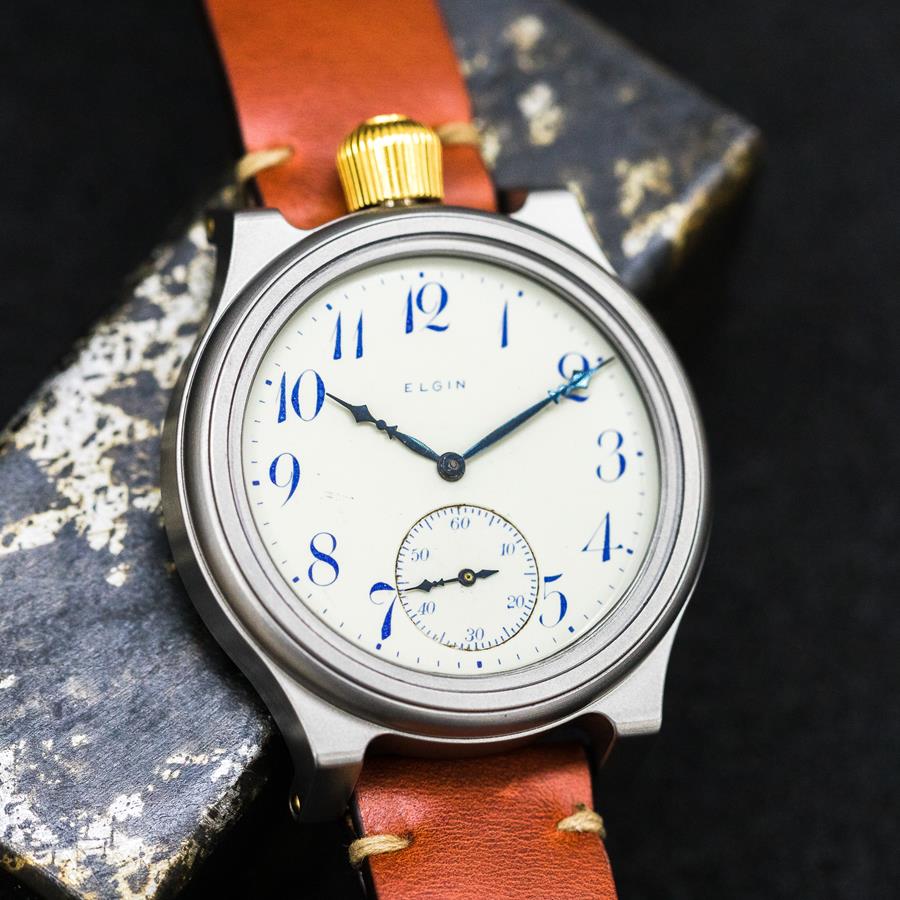 We are pleased to start off this week with a very special Holiday Edition release, the Chicago 435 in celebration of Independence Day. We set aside this dial specifically to save for this occasion, with this gorgeous white face accented with blue Arabic numerals. We added blued steel hands as well and finished it off with a crimson strap. Our sandblasted titanium case ties everything together, while the gold crown and hardware bring elegance to this exquisite timepiece. This watch has every element of American craftsmanship that you could ever want from a watch, and we couldn’t be more proud of how it came out.

Originally manufactured in Elgin, Illinois by the Elgin National Watch Company, this movement boasts 17 screw-set jewels with beautiful brass settings. An incredibly intricate design all across the build plate shows off the high-quality eye for detail that is a signature look for Elgin. Gold-plated gears and a brass balance wheel shine through and bring attention to inner workings that peek out beneath this ¾ bridge plate. This watch was originally produced in 1921, the same year that President Warren Harding signed a congressional declaration ending America’s involvement in WWII on July 2nd. 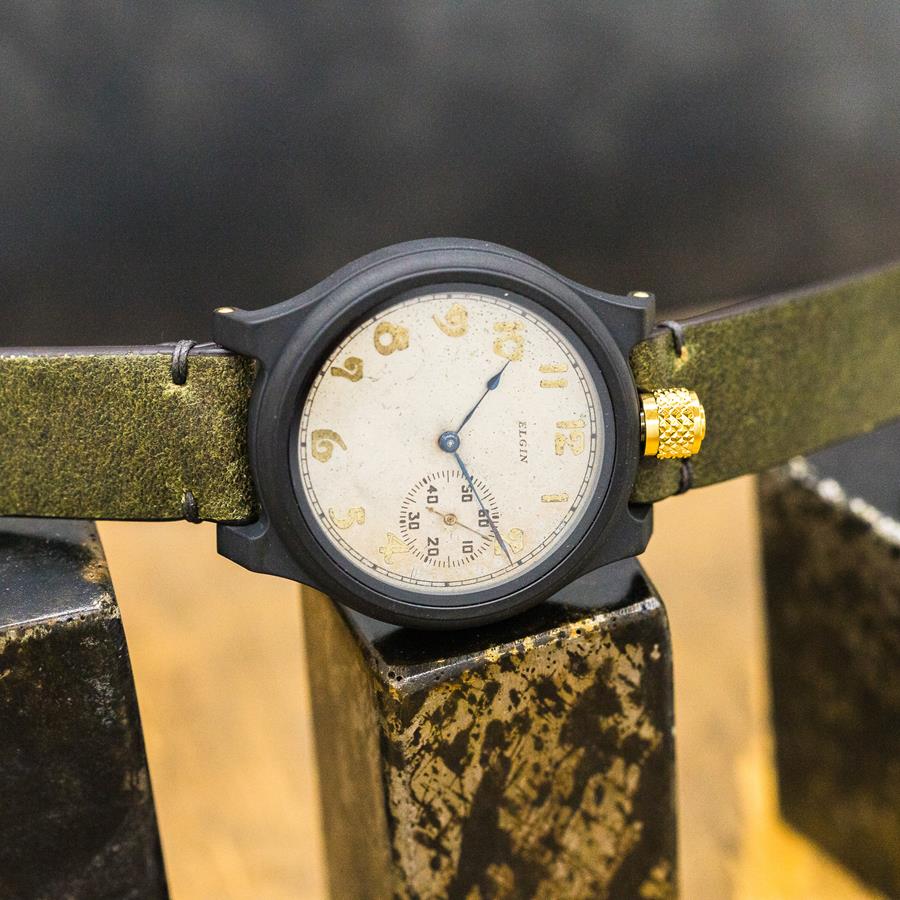 To finish off our week of unique Hunting Style watches, we bring you another wonderful example from the Elgin National Watch Company. This piece is another special conversion style dial, taking a Hunting Style watch and rotating the movement 90 degrees with this new dial, to move the second indicator to the 3 o'clock position and the crown up to the 12 o'clock position.

We love the soft look of this dial, with the very subtle second indicator that at first glance barely even looks out of place. We matched these amazingly unique gold Arabic numerals with our gold-plated crown and hardware throughout. A marsh green strap and black DLC titanium case give contrast to the dial and helps to pronounce some of the character of this watch.

The movement inside this watch is decorated beautifully all across the main build plate, in a very uniquely Elgin manner. Stainless steel hardware accents the flair of these circular patterned winding wheels, while gold-plated gears and a brass balance wheel peek out from below. 17 screw-set jewels and a Breguet hairspring help to power this fantastic watch, originally manufactured in Elgin, Illinois in 1923. This is also the same year that Roy and Walt Disney founded the Walt Disney Company. 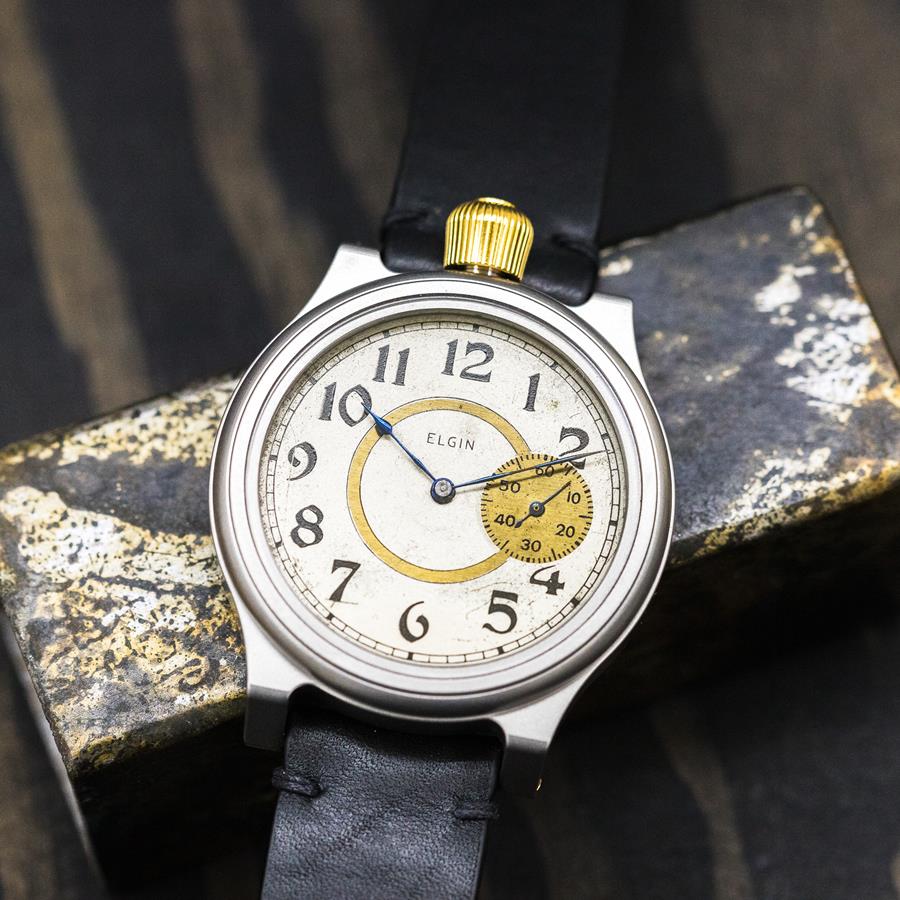 We extend our showcase of Hunting Style watches this week by presenting this truly one-of-a-kind watch from the Elgin National Watch Company. In the early 1920s and 1930s, railroad companies began to set standards for timekeeping and pocket watches to qualify for service on the trains. One of these specifications was that the crown had to be at the 12 o'clock position. Because of this, watch companies made these conversion dials that let you turn your older Hunting Style watch into an open-face watch by rotating the movement by 90 degrees, placing the second indicator over at the 3 o'clock position, and thus moving the crown up to the top.

This watch could then pass railroad standards and be used by conductors without having to purchase a whole new watch. This makes for quite an interesting story, as most older watches like this would not expect to see the second indicator in this position. We love how the gold-colored accents of this dial contrast this soft, worn face. We matched the dial with this sandblasted titanium case, as well as gold-plated hardware and crown.

As you turn the watch over to view the movement, you might notice everything is shifted in a different orientation, showing off the unique shape of this ¾ plate and carefully machined design. This watch is powered by 17 screw-set jewels as well as gold-plated gears, and a Moseley regulator. A brass balance wheel with double roller escapement helps everything run smoothly all these years later. Originally produced by the Elgin National Watch Company as a Hunting Style pocket watch in 1916 in Elgin, Illinois. In July of this same year, a series of deadly shark attacks occurred on the shores of New Jersey from the same shark, resulting in the death of four. Later known as the Jersey Shore Shark Attacks of 1916, this eventually became the inspiration behind the story Jaws, created by Peter Benchley. 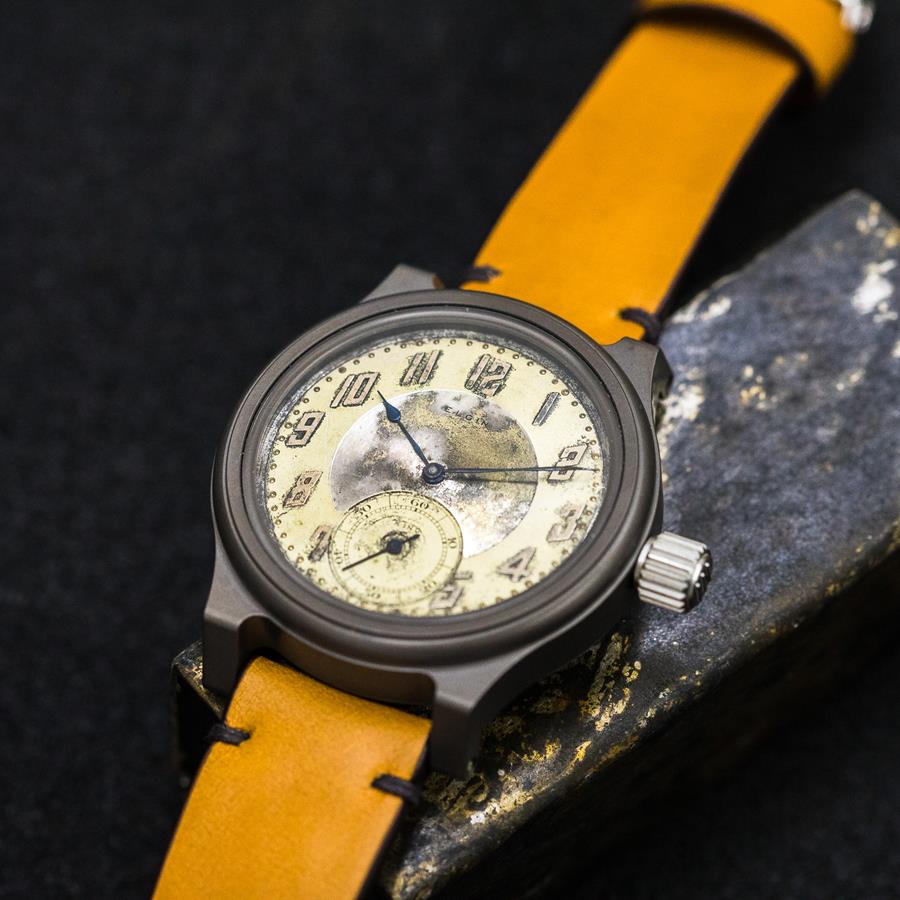 This week we are delighted to present a few very unique Hunting Style watches from the Elgin National Watch Company. When we say it is a Hunting Style, this refers to the position of the crown being at the 3 PM location instead of the common 12 PM. The reason they did this was that this watch would have had a clasp on the front to protect it, that pops open for viewing. With the crown located at the 3 PM position, it was thought that it was easily operated with one hand while your other handheld your rifle. This watch shows off its age with a wonderful amount of wear and tear on the dial, pronounced by this bold gunmetal case and dark blue steel hands.

Our custom hunting style nickel-plated crown is a little smaller than our typical models and is complemented by nickel-plated hardware throughout. We paired the yellow tones of the dial with this rye strap to tie the whole watch together nicely.

The movement of this watch contrasts the unique character of the dial with this incredibly clean and beautiful build plate, intricately machined to draw you in and want to explore this watch further. This movement is decorated with 17 screw-set jewels and stainless steel hardware all throughout. Beneath this large build plate and regulator lies gold-plated gears and a brass balance wheel, keeping everything ticking away all these years later. Originally manufactured in Elgin, Illinois in 1917, this watch is a wonderful representation of history and American craftsmanship.

At this same time, WWI was heating up in Europe, eventually drawing America to join the fight. Men were leaving their hunting in the woods of Illinois to take their skills with a rifle across the Atlantic Ocean to defeat Germany. Perhaps they decided to carry their Elgin pocket watches with them to war and brought them back when the war was over to be passed on to future generations. 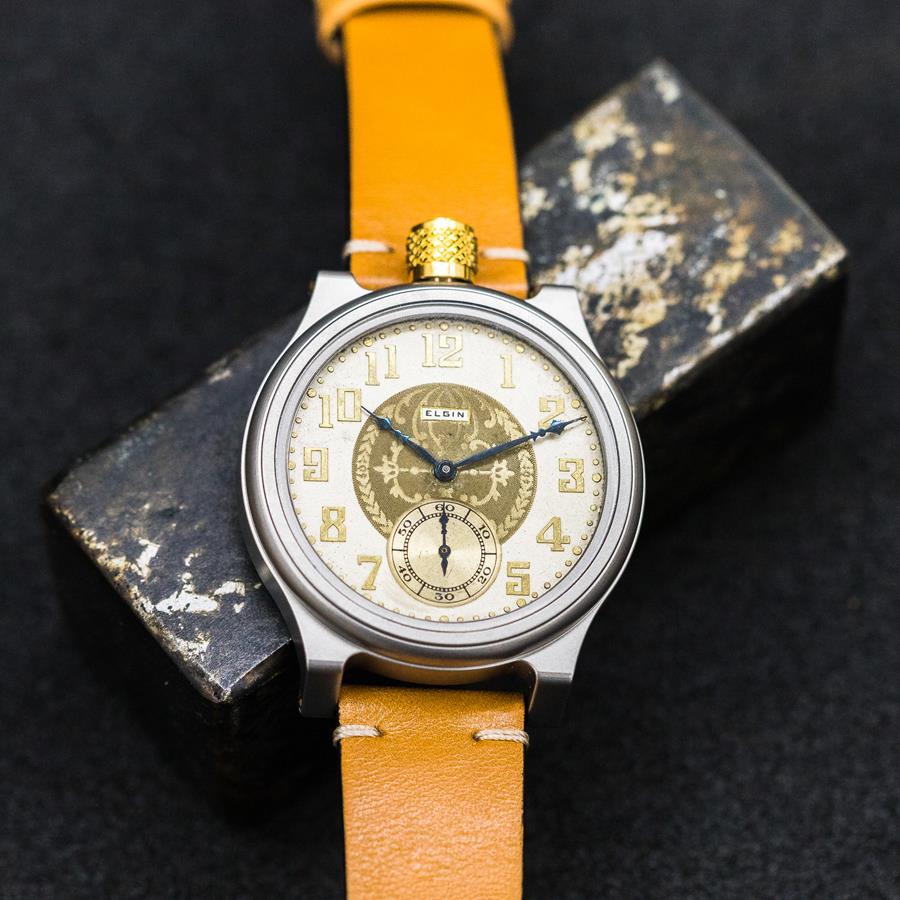 We are elated to bring you this exquisite example of craftsmanship from the Elgin National Watch Company, the Chicago 432. The features of this watch are truly unique with amazing detail on this double-sunk dial, bringing out the intricate design work along with these bold numerals. We matched the gold of the dial with our gold-plated crown and hardware and tied it in with our beautiful tan strap. The softness of this sandblasted titanium case works well with the dial and strap, giving this watch a truly classy feel that will surely turn heads.

The unique features on the outside are just as unique as what is on the inside of this fabulous movement. A brilliantly aged build plate shows the age of this watch, as well as showcasing Elgin’s signature Moseley regulator and ¾ build plate. 17 screw-set jewels power the gold-plated gears as a Breguet hairspring. This watch was originally manufactured in 1923 in Elgin, Illinois. This year also marks the very first live broadcast of a professional ice hockey game, by Norman Albert in Toronto, Canada for the Ontario Hockey league.