Take A Tour With Us!

Are you going to watch Episode #3 of Custer & Wolfe? We’re so excited to take you on a tour through our new American machining and watchmaking space here in Fort Collins. On episode three of Building a Watch Company, we share our building plans, discuss a new cleanroom for watchmaking and wrap it up with the machines we’re most excited to introduce to our shop. It’s not perfect (yet), but it’s ours! ​​​​​​​ 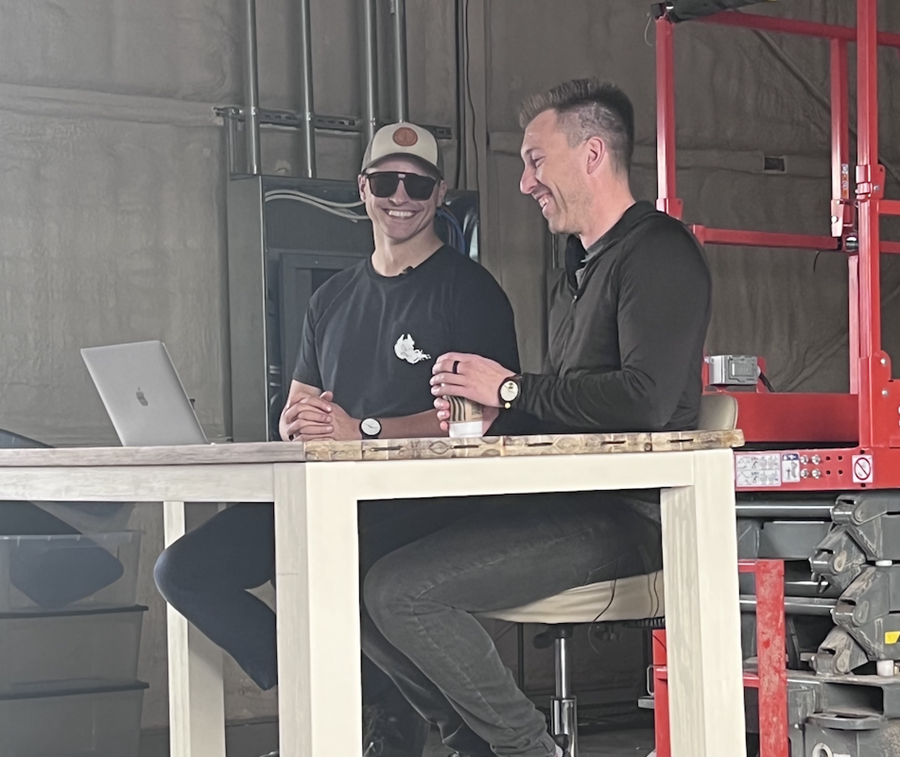 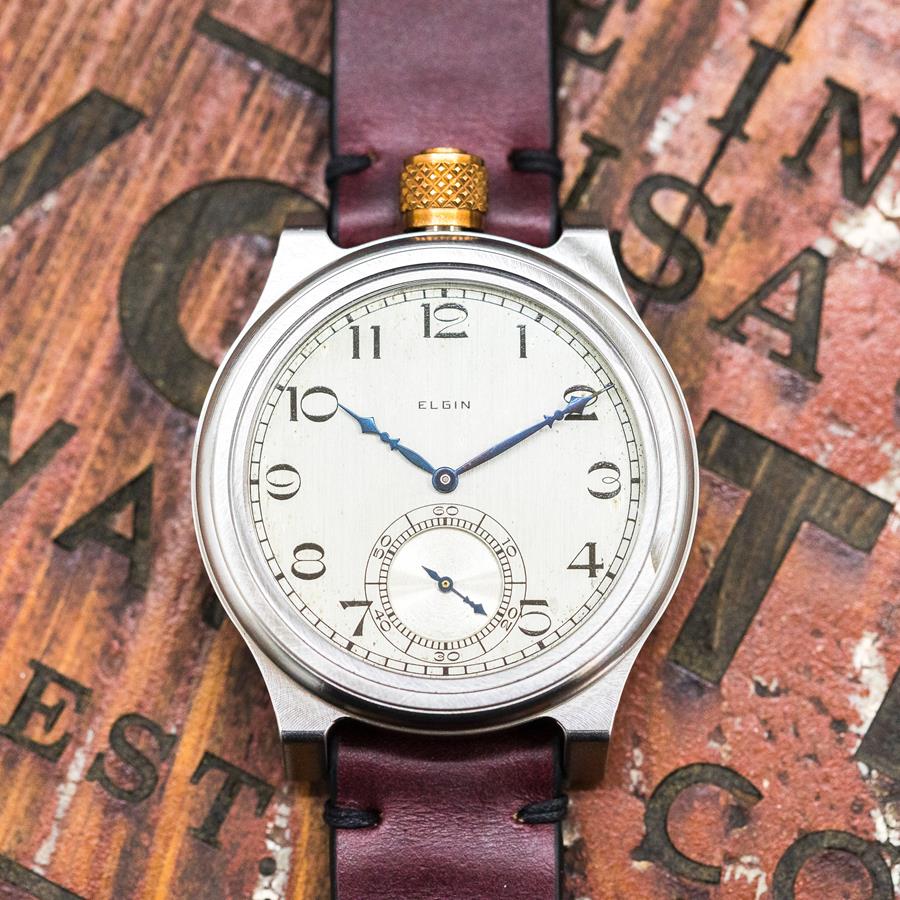 Today, we're thrilled to bring you this beautiful piece originally manufactured by the Elgin National Watch Company in 1926 — the Chicago 466. The dial sports an ivory white background along with navy blue hour and minute hands. One feature that makes the pocket watch's dial especially unique is its distinct, stylized numerals that showcase the piece's antique qualities. We enclosed the pocket watch in our robust and scratch-resistant Machined Titanium case and a copper-plated crown, both of which draw attention to the piece's elegant dial.

Our Machined Titanium's clear back reveals a 345-grade open-face movement with a ¾ plate and double roller. You can also view the watch's captivating inner workings, including its gold-plated gears powered by 17 ruby and sapphire jewels. To top it all off, we paired the watch with our artisan-designed Merlot leather watch strap, adding both comfort and even more beauty to the finished piece.

The Elgin National Watch Company manufactured the pocket watch in Elgin, Illinois, in 1926 — the same year that American physicist and inventor Robert Goddard launched the first liquid-fueled rocket. Goddard first became interested in utilizing liquid propellants in 1909. After a series of experiments in the early 1920s, he launched his rocket named "Nell" in Auburn, Massachusetts, in 1926. He used gasoline and liquid oxygen as propellants, ultimately resulting in the rocket reaching a height of 41 feet over the course of 2.5 seconds. Today, you can visit the Goddard Rocket Launching Site in Auburn, Massachusetts. 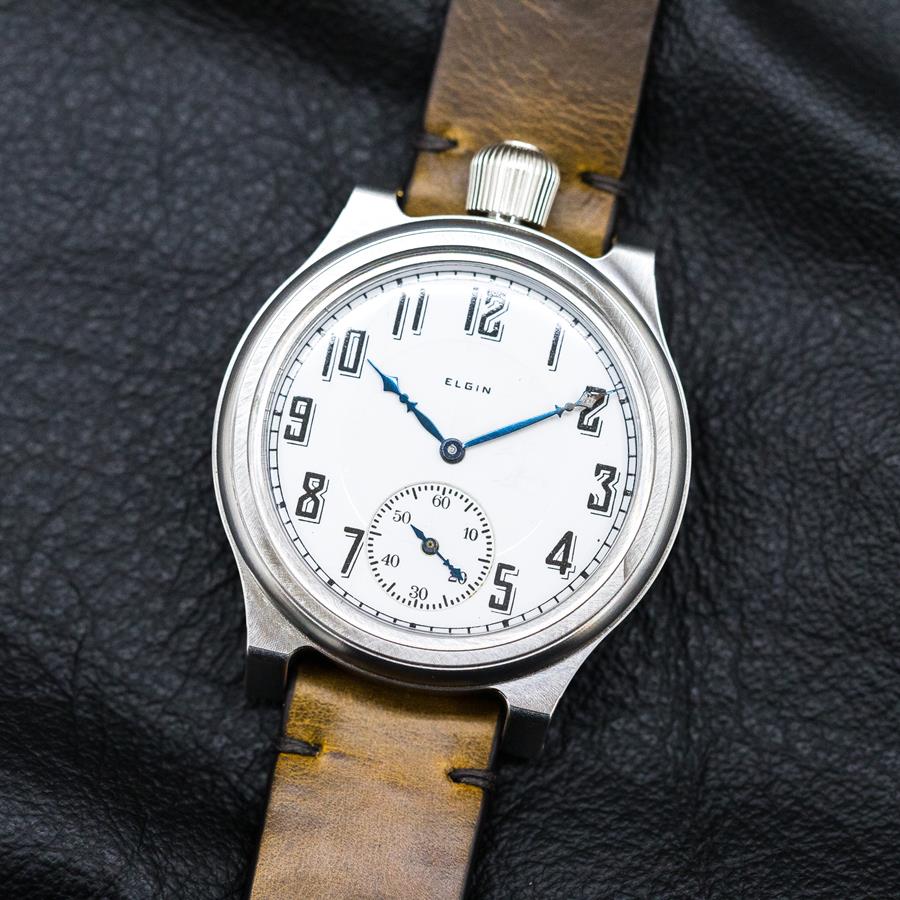 We’re delighted to present this antique, exquisite piece that the Elgin National Watch Company originally manufactured in 1928 — the Chicago 465. The watch features a stunning dial with a pristine white background and captivating navy minute and hour hands. The dial also sports bold, stylized numerals with a 45-degree angle transparent text-shadow. We added even more sophistication to the original pocket watch by encasing it inside our scratch-resistant and robust Machined Titanium case. The glimmering case and nickel crown make the watch shine even brighter with its breathtaking, elegant design.

Our Machined Titanium’s clear back reveals the watch’s open-face movement with 17 awe-inspiring ruby and sapphire jewels atop its ¾ plate. You can also view the watch’s incredible inner workings with its attractive gold-plated gears and Moseley regulator. We paired this gleaming watch with our comfortable and practical Moss leather watch strap, contrasting the bright dial with a rugged style.

The Elgin Watch Company originally manufactured the piece in Elgin, Illinois, in 1928 — the same year that the New York Yankees became the first Major League Baseball team to sweep two consecutive World Series. In 1927, they swept the Pittsburgh Pirates, and in 1928, they swept the St. Louis Cardinals. Tragically, New York Yankees pitcher Urban Shocker died of heart failure only months after the Yankee’s 1928 World Series win. The iconic pitcher was known for his spitballs — which are now illegal in the MLB — and he had a total of 983 strikeouts. 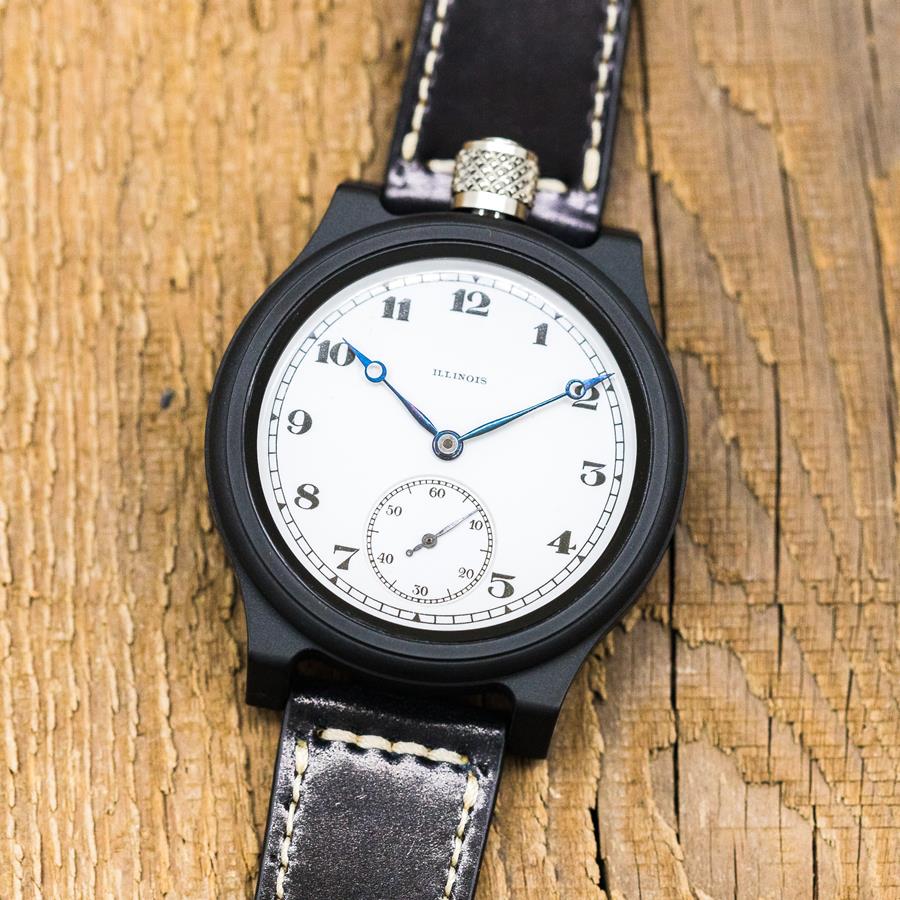 We’re excited to showcase this exceptional piece initially produced by the Illinois Watch Company in 1920 — the Springfield 488. Originally manufactured in Springfield, this watch features an immaculate, white background along with classically-styled black numerals. The hueless background and numerals emphasize its stunning and unique navy hour and minute hands. We matched the dial’s style with our robust and pristine Diamond-like coating (DLC) case along with a nickel-plated crown. The case’s dark shade and shining crown pair perfectly with the dial’s straightforward and sophisticated design. We continued emphasizing the watch’s elegance by equipping the piece with our Cordovan Black leather watch strap, adding both comfort and beauty.

On the back of the watch, you can see the timepiece’s complex and breathtaking inner workings, including rose-gold plated gears and 17 remarkable jewels. The watch has an open-face movement configuration with a nickel finish and pendant setting, and it also sports a center bridge plate.

The Illinois Watch Company originally manufactured the pocket watch in Springfield, Illinois, in 1920 — the same year that Prohibition went into effect in the United States. The ban on alcohol began on January 17, 1920, with the Eighteenth Amendment, and it persisted until December 1933, when the Twenty-first Amendment repealed the anti-alcohol amendment. The Twenty-first Amendment is the only U.S. amendment in history that repealed a previously instituted amendment. 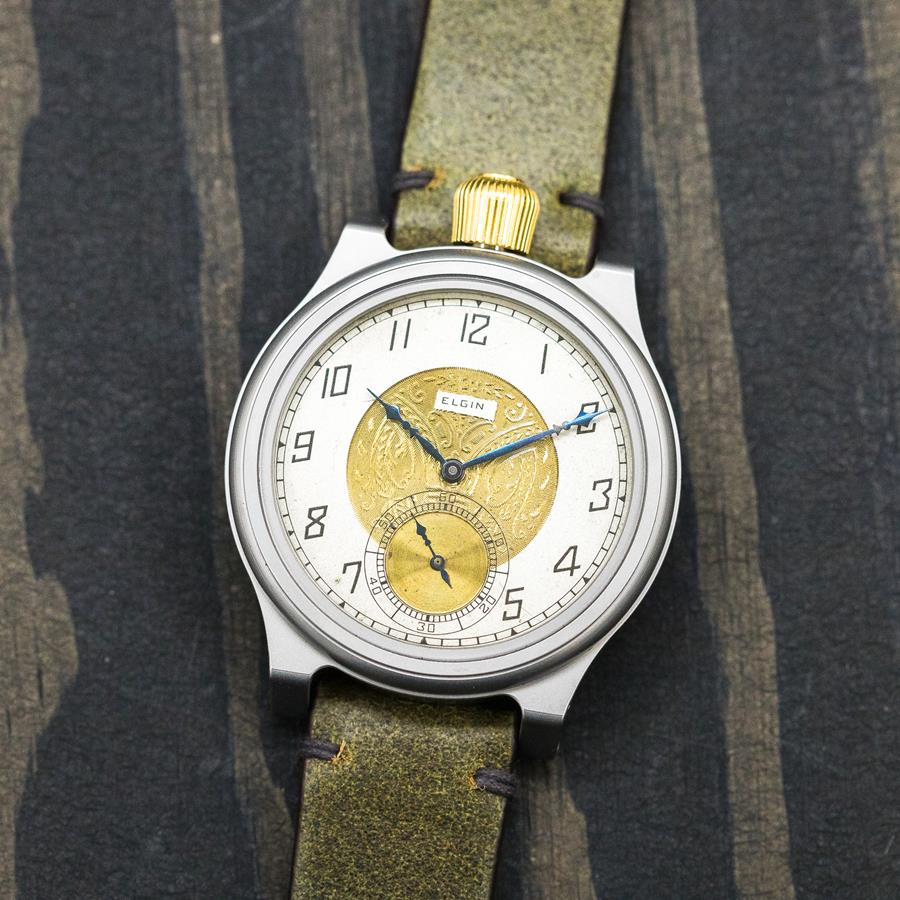 We’re happy to present this sophisticated piece originally manufactured by the Elgin National Watch Company in 1926 — the Chicago 467. The watch features a gorgeous dial with a light-gray background and thin, stylish numerals. The piece boasts an intricate and luxurious gold-colored center design that shines attractively against the simple background, and the subdial also features a matching golden hue. We encased the pocket watch within our Machined Titanium case, and we equipped it with a gold-plated crown that complements the dial’s center design.

Our open-back case reveals a 345-grade open-face movement with breathtaking golden-plated gears. The watch’s back also features a Breguet hairspring, Moseley regulator, and 17 stunning ruby and sapphire jewels atop its ¾ plate. Finally, we topped off the piece with our comfortable, artisan-designed Olive leather watch strap along with a nickel-plated buckle. 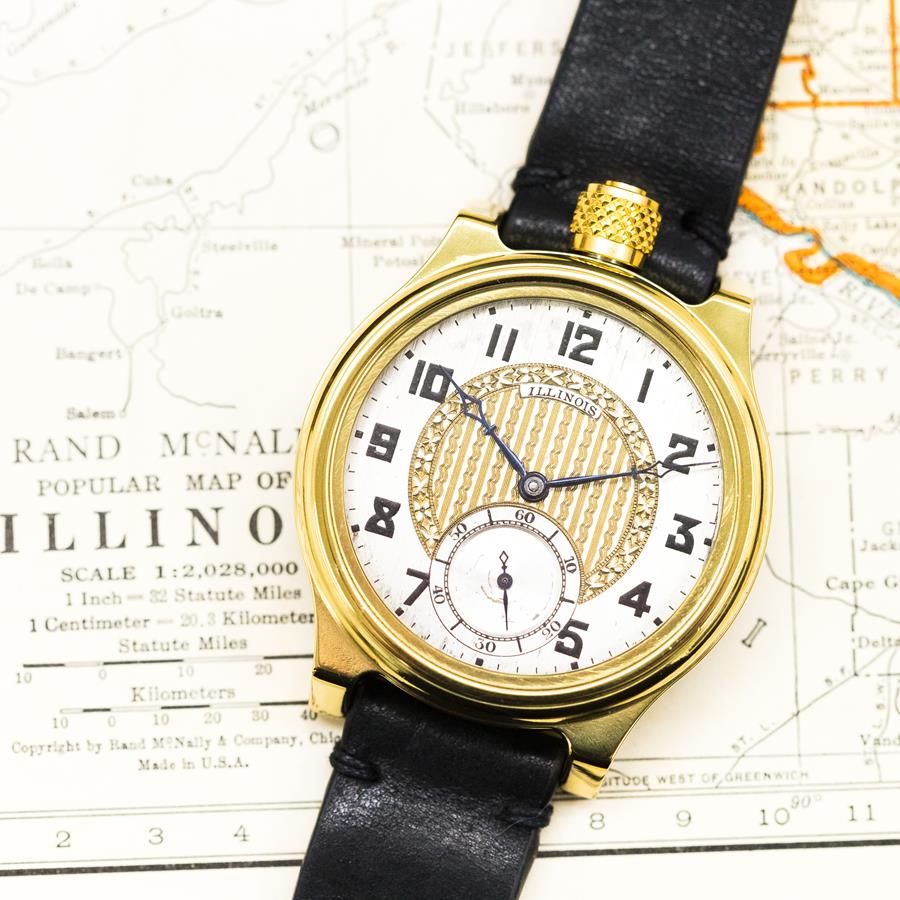 We're happy to showcase this exquisitely luxurious piece originally manufactured by the Illinois Watch Company in 1923 — the Springfield 487. The first detail you'll likely notice about this pocket watch is its stunning gold-colored design in the dial's center. The design looks especially intricate and beautiful against the dial's pristine white background. Additionally, the dial sports stylish and bold numerals. We emphasized the pocket watch's opulent design by pairing it with our PVD Zircon Gold case along with a gold-plated crown.

The case's open back reveals a 274-grade open-face movement with a ¾ plate and three adjustable positions. You can also see sumptuous details on the back of the watch, including golden screws, 21 breathtaking jewels, and bronze-plated gears. To top off this gorgeous watch, we equipped it with our comfortable black leather watch strap along with a gold-plated buckle.

The Illinois Watch Company originally manufactured this in Springfield, Illinois, in 1923 — the same year that President Warren Harding ordered American troops to return home from Germany. World War I ended in November 1918, but the United States continued occupying the Rhineland with thousands of troops as part of the Treaty of Versailles and the Rhineland agreement. After U.S. troops exited the region, America gave the remaining occupation zone to the French, who withdrew from the Rhineland in 1930. 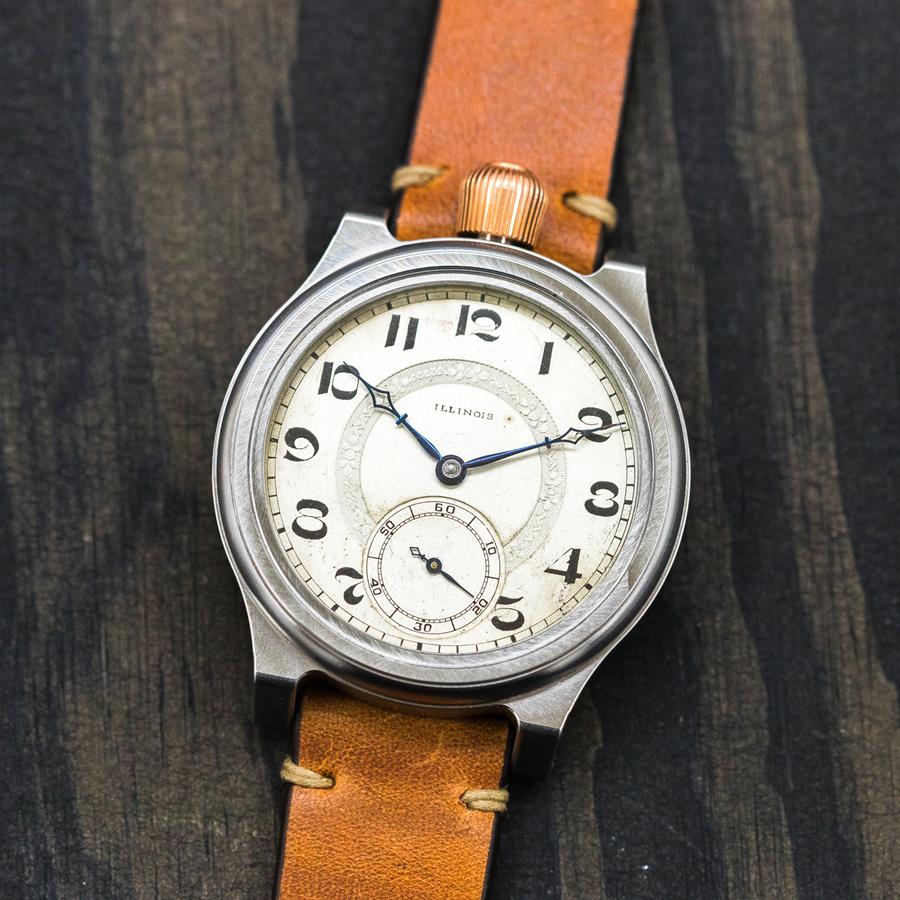 We’re pleased to present this antique, one-of-a-kind piece originally manufactured by the Illinois Watch Company in 1923 — the Springfield 486. The watch’s dial sports a cream-colored background with a circular ring in the center. The piece also features distinct navy minute and hour hands along with stylized numerals that look especially attractive against the cream background. We encased the pocket watch in our scratch-resistant Machined Titanium case, emphasizing its unique and sophisticated dial.

The Machined Titanium’s clear back reveals the watch’s 405-grade open-face configuration with a nickel finish and pendant setting. It also boasts a center bridge plate with 17 stunning jewels. Finally, you can view the gorgeous and robust rose-gold plated gears that power the Springfield 486. We paired the watch with our artisan-crafted Tobacco leather watch strap, which draws attention to the watch’s elegant style while also bringing warmth to the complete piece.

The Illinois Watch Company originally manufactured the pocket watch in Springfield, Illinois in 1923 — the same year that New York City opened Yankee Stadium. Before they had their own field, the Yankees shared a stadium with the New York Giants baseball team, which eventually relocated and became the San Francisco Giants. Although Yankee Stadium is primarily known for baseball, various events have occurred on the pitch, including the 1958 NFL Championship Game, three Papal Masses, boxing matches, and more. In 1958, the stadium had a record attendance of 123,707 people during a Jehovah’s Witnesses International Convention.