There Is Only One Special Edition Left!

There's Only One Special Edition Left!

Your weekly roundup of last week's Watch of the Day watches is below, but first... how amazing are these pictures of the Special Edition?! 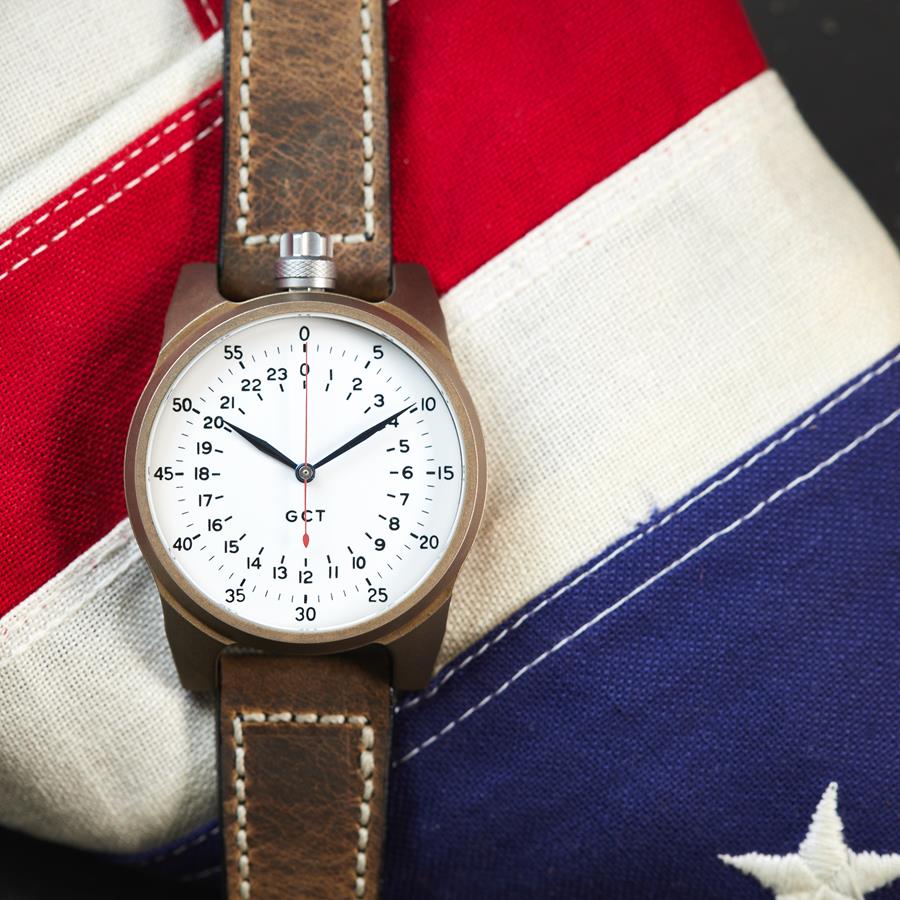 Thank you to everyone that came to support us in Chicago last weekend! We had an incredible show and spent time with so many customers, plus we sold a bunch of watches! The bad news is that we now only have ONE Special Edition left. Will it be yours?

We're building these over the next few weeks and can't wait to hear what our customers think! The response from our 4th Edition customers has been astounding! 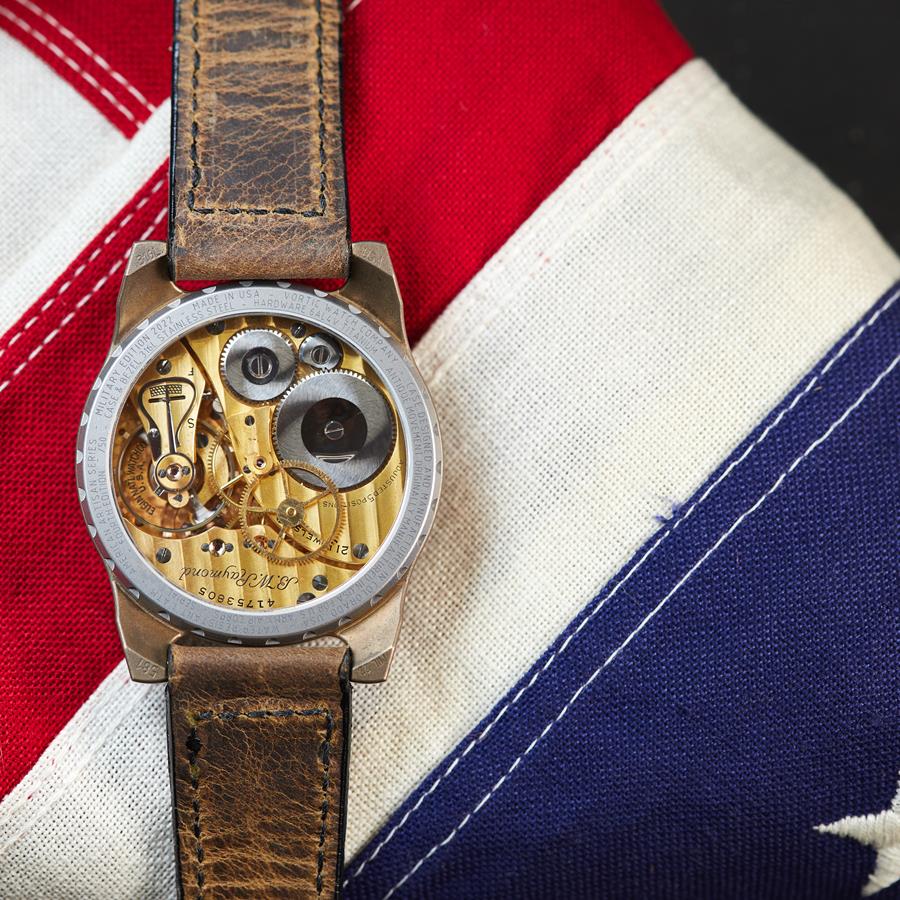 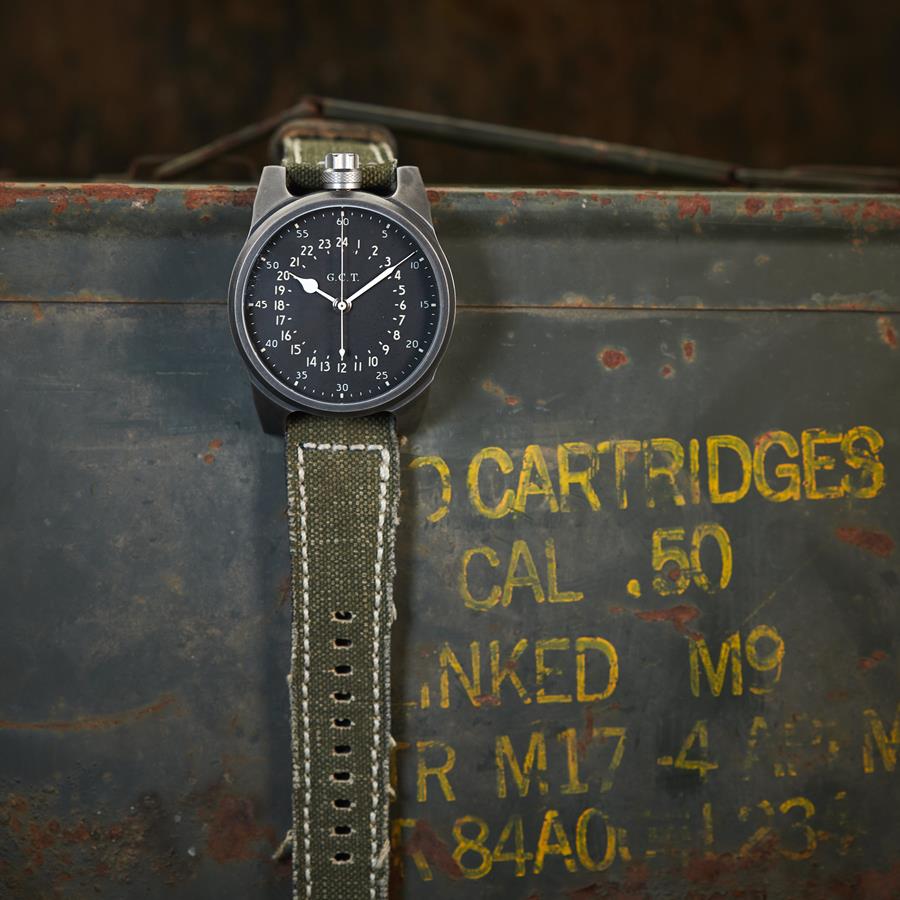 The good news is though that we have a handful of 4th Edition Military watches left, and we can ship them right away!

Get Your Hands On A 4th Edition Here

Every Tuesday we send this Weekly Roundup of our most recent Watch of the Day watches. Some of these tend to go fast, so be sure to check the website each day at noon Mountain Time or follow us on social media to get more frequent updates! 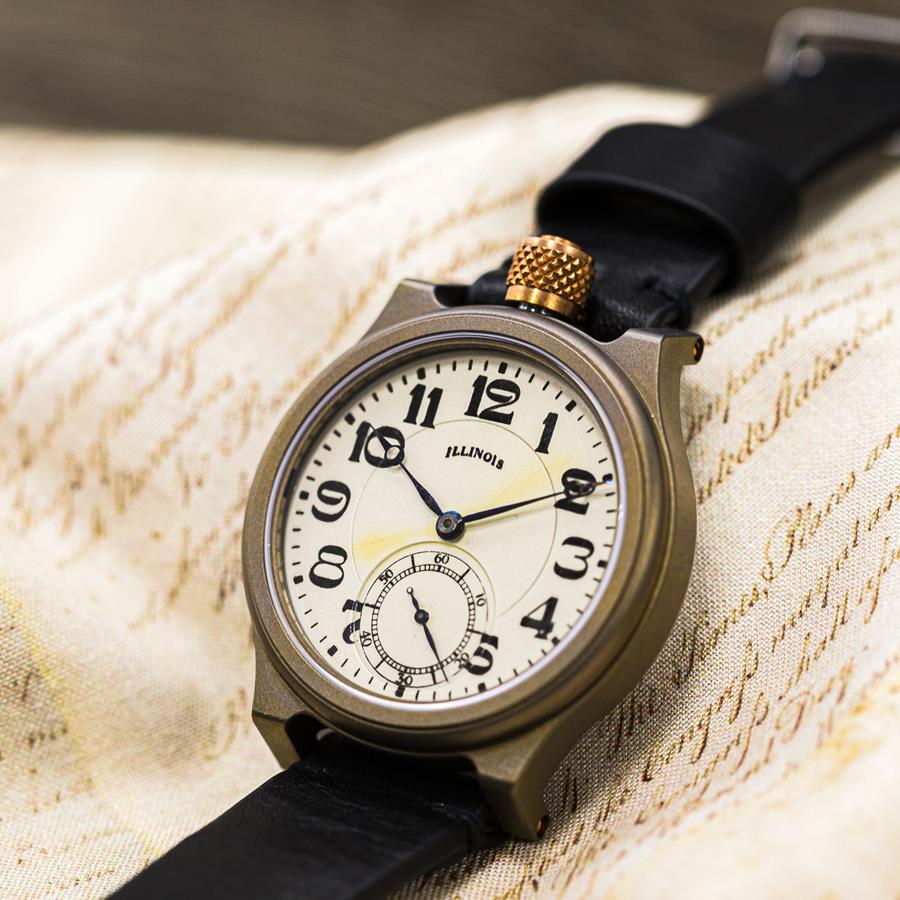 We’re happy to present to you this distinct and breathtaking watch that was initially released by the Illinois Watch Company — the Springfield 555. This impressive piece of American watch history features a dial with large and bold black numerals and a matching subdial that look especially striking against its cream-colored background. The front of the watch also boasts stunning, blued steel heavy moon watch hands. We matched this splendid antique pocket watch with our Bronzed Titanium case and topped it off with a similarly-colored copper crown, making the final, one-of-a-kind watch even more unique.

The rear side of the watch displays a 405-grade open-face movement with a Going barrel and a center bridge plate featuring a breathtaking engraving that reads “The Autocrat.” You can also see the watch’s 17 sumptuous jewels that energize the movement’s bronze-plated gears. Finally, we paired this remarkable watch with our comfortable, hand-crafted Black leather watch strap, complementing its gorgeous color palette.

The Illinois Watch Company originally manufactured the pocket watch in Springfield, Illinois, in 1918 — the same year that President Woodrow Wilson sailed to Europe for the Paris Peace Conference, making him the first sitting U.S. president to travel to Europe. 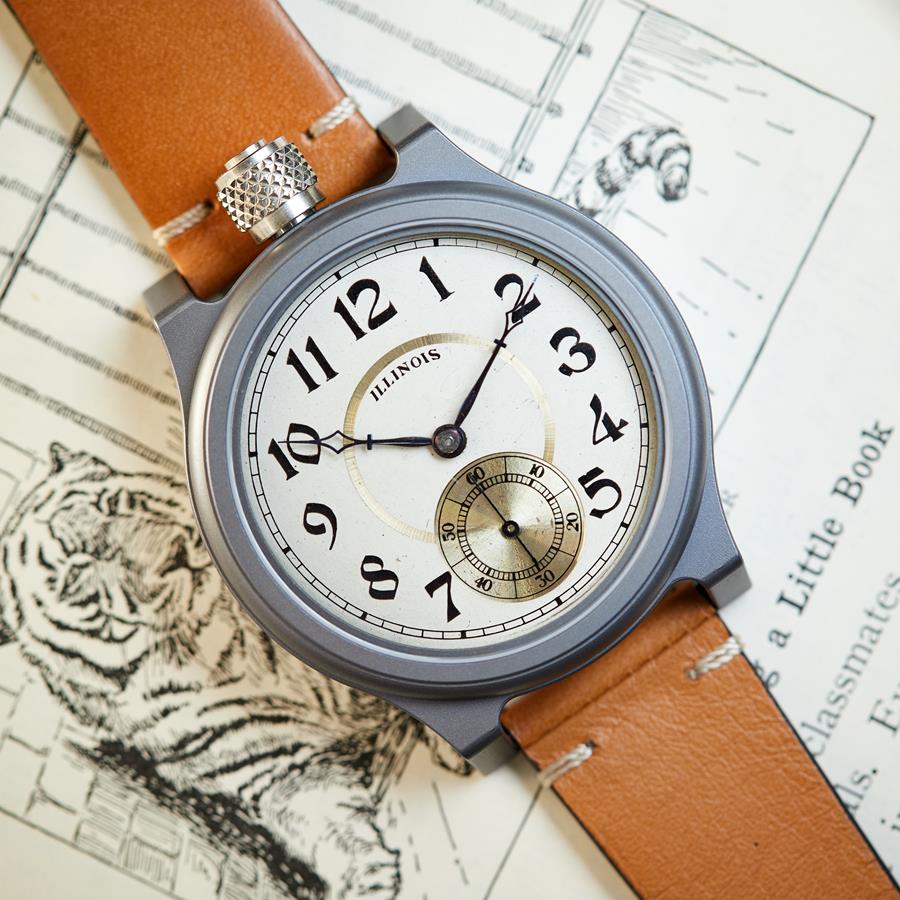 We’re pleased to present to you this handsome piece originally manufactured by the Illinois Watch Company nearly a century ago — the Springfield 556. The front of this splendid watch displays a cream-colored dial with blued steel diamond kite watch hands and a glimmering subdial. The dial also features stylish black numerals, and a circular outline underneath that matches the subdial. We encased this stunning antique pocket watch within our robust and pleasing Blued Titanium case and matched it with a nickel-plated crown.

On the back of the watch, you can see its Duquesne private run movement, which is 405-grade and has an open-face configuration. The movement features eye-catching engravings, including “Duquesne” and “Illinois Watch Co Springfield,” and it also boasts a Going barrel, nickel finish, and pendant setting. Finally, you can see its bronze-plated gears powered by 17 jewels throughout its center bridge plate. We paired this unforgettable watch with our comfortable, artisan-designed Tan leather watch strap, making the final piece all the more special.

The Illinois Watch Company initially produced the pocket watch in Springfield, Illinois, in 1923 — the same year that US Attorney General Harry M. Daugherty officially made it legal for women to wear trousers wherever they pleased.

Although the idea of it being illegal for women to wear pants is unthinkable today, some states in America and many European countries forbade women from wearing these clothing items as it was seen as cross-dressing. In fact, it wasn’t until 2013 that women were technically allowed to wear pants in Paris, and US female senators didn’t gain the right to wear pants on the senate floor until 1993.

See More Pictures Of This Watch Here
The Springfield 551 (SOLD) 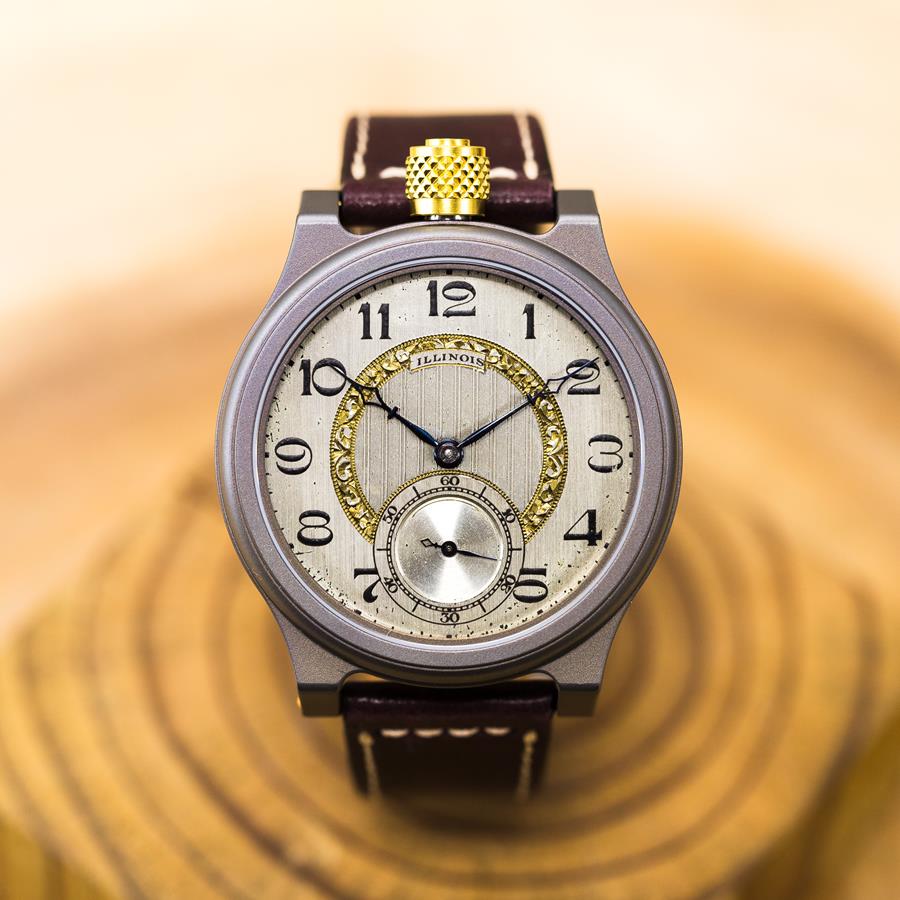 We’re thrilled to showcase this eye-catching and luxurious watch that features a pocket watch movement originally designed by the Illinois Watch Company — the Springfield 551. The front of this stunning watch features a cream-colored dial with a center design pattern that boats an intricate gilt outline. The dial also displays additional remarkable details, including its uniquely-stylized black numerals, an eye-catching subdial, and blued steel diamond kite watch hands. We paired this exceptional pocket watch with our robust and stylish Bronzed Titanium case and topped it off with a gold-plated crown that complements the dial’s stunning gilt details.

The rear side of our Bronzed Titanium case is transparent, enabling you and other watch enthusiasts to see the pocket watch’s beautiful Autocrat-grade open-face movement with a center bridge plate, Reed regulator, Breguet hairspring, and Going barrel. The movement also displays a splendid engraving that reads “The Autocrat” as well as bronze-plated gears powered by 17 sumptuous jewels with gilded settings. Finally, we matched this one-of-a-kind watch with our comfortable Cordovan Oxblood leather watch strap, making the final product even more unforgettable.

The Illinois Watch Company initially released this pocket watch in Springfield, Illinois, in 1925 — the same year that President Calvin Coolidge established Glacier Bay as a national monument near Juneau, Alaska. President Coolidge had the authority to create the monument thanks to the Antiquities Act of 1906 — signed by President Theodore Roosevelt — which declared that the President of the United States has the authority to create national monuments from federally-owned land in order to preserve something of cultural, scientific, or environmental significance.

We’re incredibly excited about today’s watch because it’s the first to feature our new V3 Machined Titanium Case! This gorgeous piece of American manufacturing history was originally released by the Elgin National Watch Company in 1927 — the Chicago 013.

The remarkable antique movement features a splendid dial with large black numerals and blued steel extra-heavy spade & whip hands that look all the more stunning against its immaculate white background. This pocket watch movement sits proudly within our V3 Machined Titanium case, which perfectly complements the antique pocket watch. We also topped it off with a matching nickel-plated crown.

On the back of the watch, you can see its breathtaking 387-grade open-face movement with a ¾ plate that boasts 17 screw-set ruby and sapphire jewels that power its gold-plated gears. The movement also features a Going barrel, Quick train, Moseley regulator, and Breguet hairspring. Finally, we tied the piece together with our comfortable and stylish Cordovan Black leather watch strap, a fitting and practical addition to this one-of-a-kind beauty.

The Elgin National Watch Company initially produced the pocket watch in Elgin, Illinois, in 1927 — the same year that the Ford Model Company released the Ford Model A, the successor to their 1908 Model T.

Ford produced this impressive car until 1932, and it featured a 201 cubic inch displacement (3.3 L) water-cooled L-head I4 engine. The vehicle had 40 horsepower and could reach a speed of around 65 mph. By the time Ford discontinued production of the vehicle in 1932, they had sold close to 5 million units. 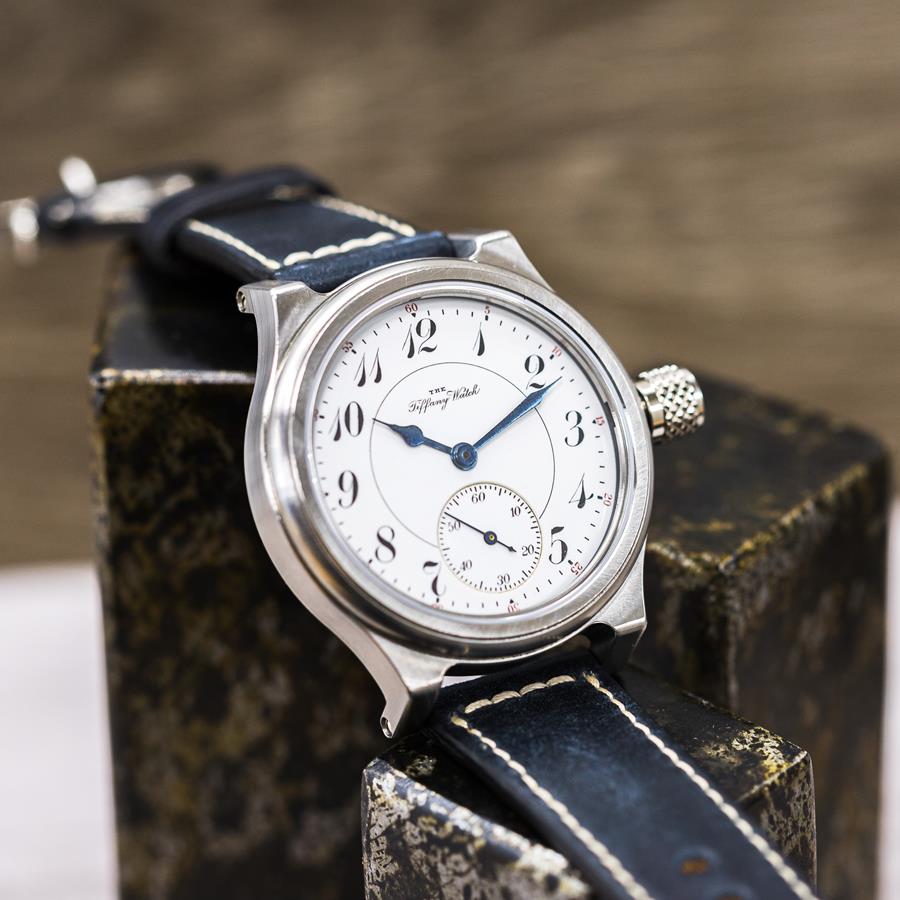 We’re delighted to present to you this incredibly rare piece that was initially produced by the Elgin National Watch Company and commissioned by the Tiffany Company — the Chicago 512. The front of this splendid watch has a single-sunk white dial with unforgettably-stylish black hour numerals and blood-red minute numerals. It features distinct and sophisticated markings that read “The Tiffany Watch,” boasting its recherché and luxurious creation. Finally, the front of the watch displays light-blue extra-heavy spade & whip watch hands.

We encased this breathtaking pocket watch within our stylish Machined Titanium case and matched it with a side-mounted nickel-plated crown. Our Machined Titanium case comes with a transparent back, allowing you to see its stunning 344-grade hunting movement with notable details, such as its Breguet hairspring, Moseley Regulator, Quick train, and Going Barrel. You can also see the movement’s 17 screw-set ruby and sapphire jewels that energize its gold-plated gears. To top the piece off, we paired it with our Cordovan Black leather watch, complementing the watch’s hands and adding even more style to the final product.

The Elgin National Watch Company originally manufactured this remarkable piece commissioned by the Tiffany Company in Elgin, Illinois, in 1920 — the same year that the United States census counted over 100,000,000 residents for the first time. 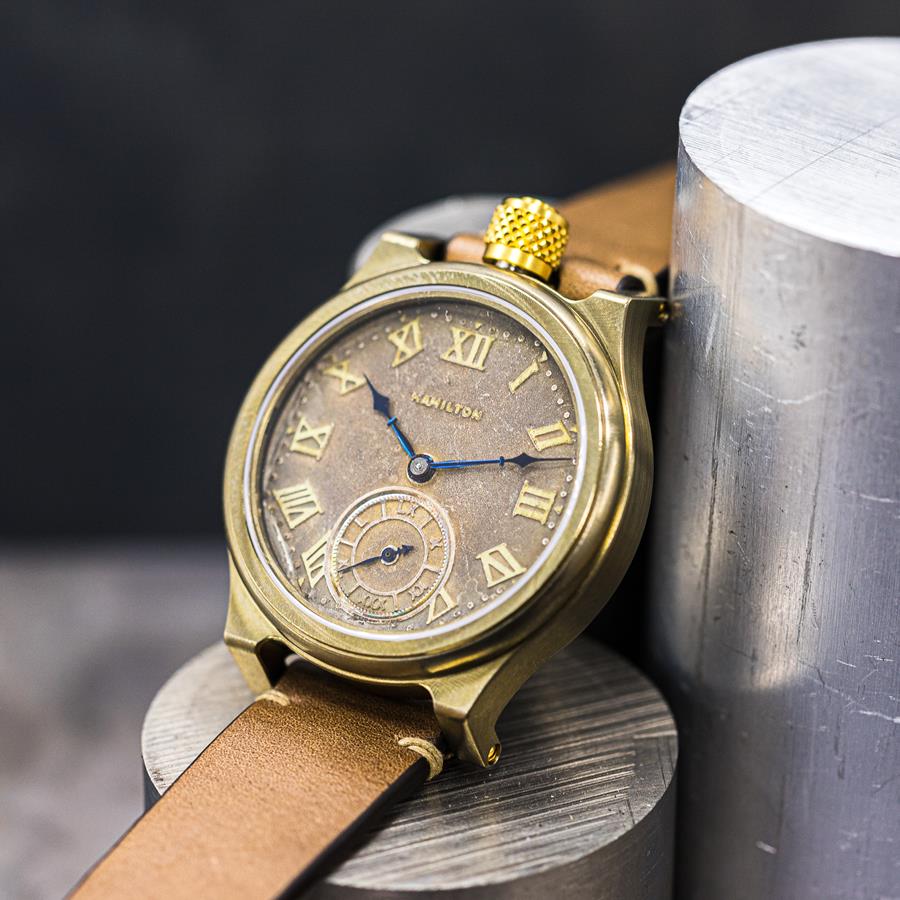 We’re pleased to present to you this incredibly unique piece of watch history that was initially released by the Hamilton Watch Company — the Lancaster 178. The front of this piece displays an astonishingly rare and distinct dial with breathtaking gold-colored Roman numerals that look especially breathtaking against its aged brown background.

Its numerals also feature an unusual style that reveals the original pocket watch case’s octagonal shape. Finally, the face of this remarkable watch features a matching subdial with Roman numerals and blued-steel solid diamond kite watch hands. We encased this antique pocket watch within our robust and luxurious Gilded Titanium case and topped it off with a gold-plated crown, complementing the dial’s unforgettable numerals.

Our Gilded Titanium case boasts a transparent back, enabling you to see its 918-grade open-face movement with a Breguet hairspring, Micrometer regulator, nickel finish, pendant setting, and a ¾ plate. The piece continues displaying sumptuous details on its rear side with 19 screw-set ruby jewels with gold settings that power its gold-plated gears. To top it off, we matched this one-of-a-kind watch with our artisan-designed Natural leather watch strap.

Below, please find a list of our upcoming trade shows and events where you can try on a Vortic watch in person. We would love to meet you!