Want To Try On A Vortic Watch?

We're On The Again!

Ever wondered what one of our watches looks and feels like on your wrist? If you live in the Austin, Texas area, you have the chance to find out! We'll be at the Austin Microlux show this weekend, November 5th & 6th, and we'd love to see you there. 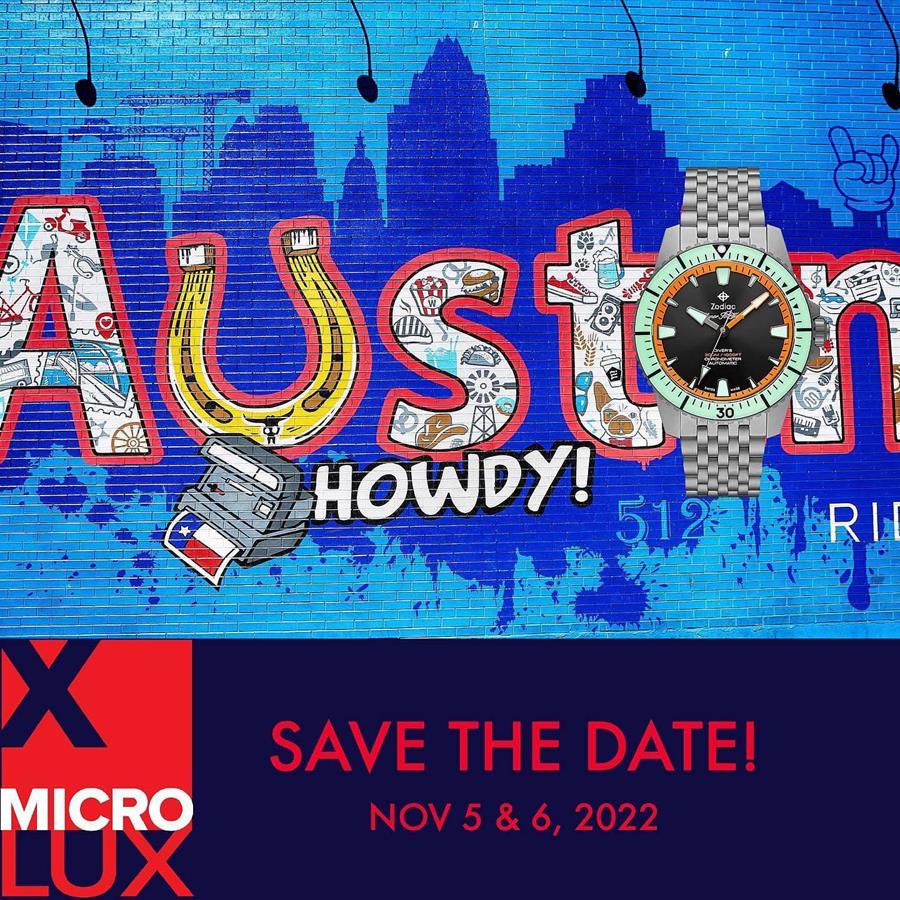 With just two months left to go in 2022, we're as busy as ever and excited to take you along on the ride. Tyler and the guys in the shop are grinding away - this is their last push towards the release of this year's Military Edition watch and they're rocking those out all while keeping up with the production of the American Artisan Series, ramping up for the holiday season, and preparing for exciting changes in the new year.

R.T. and the team have also been busy showing off the finished products, traveling around the country to shows and festivals so our customers can experience these one-of-a-kind watches in person. This past weekend, we were excited to be in Denver at the American Field Fall Market, and this weekend, we're off to Austin, Texas, joining dozens of other watch brands at the Austin Microlux 2022 show.

We have just two more shows scheduled after Austin, so if you'd like to see our watches in person or meet a member of the Vortic team, this is your chance! Details of this year's final events are below:

Why Do We Travel So Much? 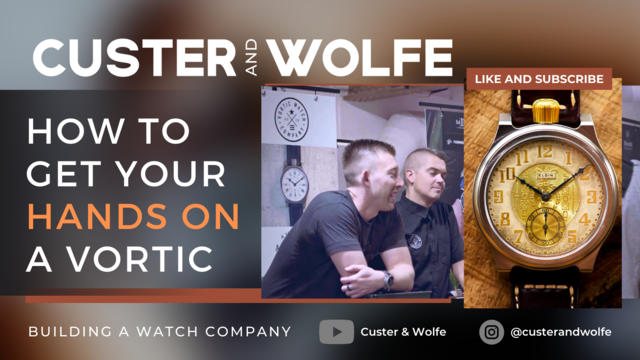 Check out this week's Custer&Wolfe, Building a Watch Company episode to learn more about some of the trade shows mentioned above and the manufacturing updates Tyler has been working on in the shop.

Whether you just discovered Vortic or you’ve been following us since the beginning, you may be wondering how you can make sure the watch you want will look good on your wrist. As a business without any true retail availability or physical presence outside of our facility in beautiful Fort Collins, Colorado, we get asked one question a lot: how can I try on one of these watches and make sure it fits me well? Watch this episode to learn more about when, how and why we do these shows!

Every Tuesday we send this Weekly Roundup of our most recent Watch of the Day watches. Some of these tend to go fast, so be sure to check the website each day at noon Mountain Time or follow us on social media to get more frequent updates! 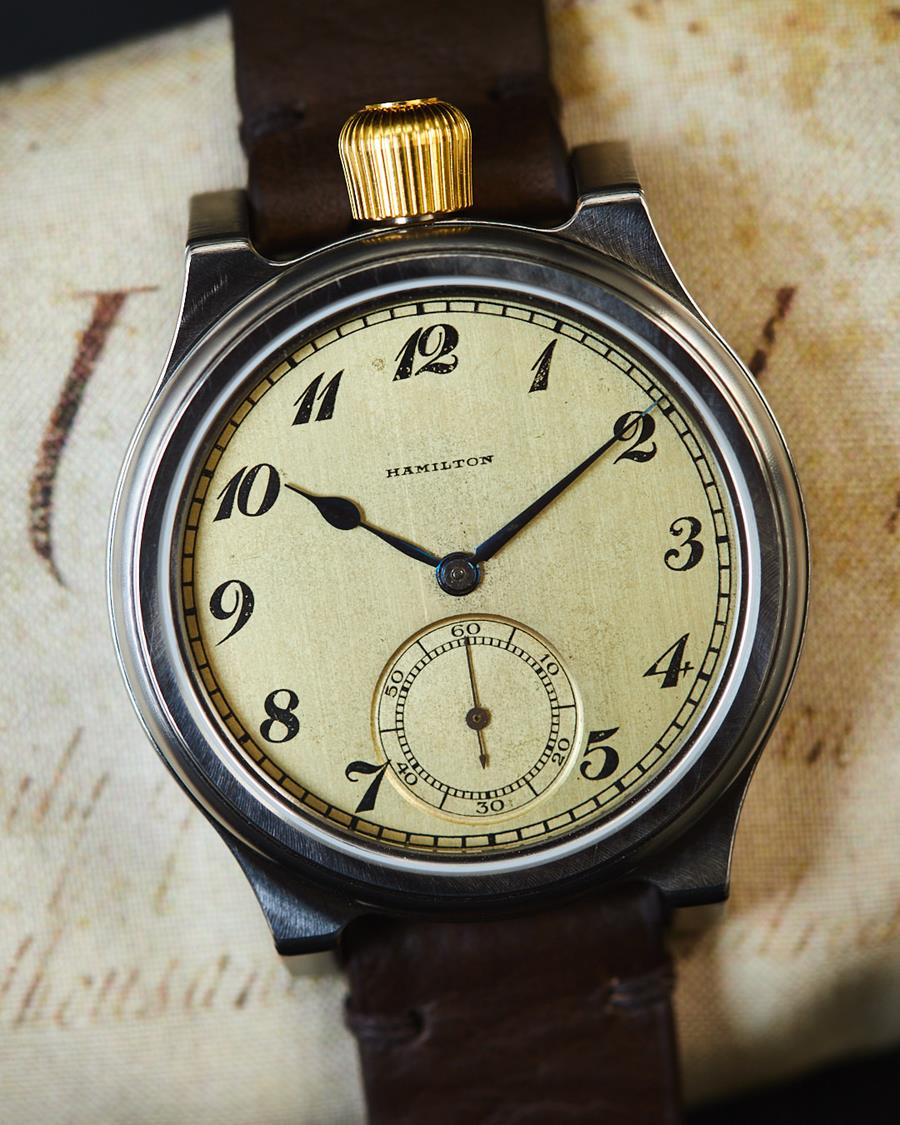 We’re thrilled to feature this exquisite piece of manufacturing history that was first released by the Hamilton Watch Company in 1931 — the Lancaster 169. This remarkable watch displays stylish black numerals and a helpful subdial against its fashionable light-yellow background. The watch face also boasts brilliant blued steel extra heavy spade & whip watch hands. We matched this sophisticated and stylish pocket watch with our robust and scratch-resistant Machined Titanium case and topped it off with a gold-plated crown that matches the dial’s distinct background.

On the back of the watch, you can view its antique 912-grade open-face movement with a Reed regulator, nickel finish, and pendant setting. The watch’s movement also features sumptuous-looking gold-plated gears that are powered by 17 stunning screw-set jewels throughout its ¾ plate. Finally, we equipped this one-of-a-kind piece of history with our stylish, artisan-designed Stout leather watch strap, complementing the piece’s gorgeous details.

Urey was awarded the Nobel Prize in Chemistry in 1934 for his discovery, but he missed the ceremony in order to attend the birth of his daughter. The highly acclaimed chemist went on to work on the Manhattan Project, where he played an integral role in the development of the atom bomb. 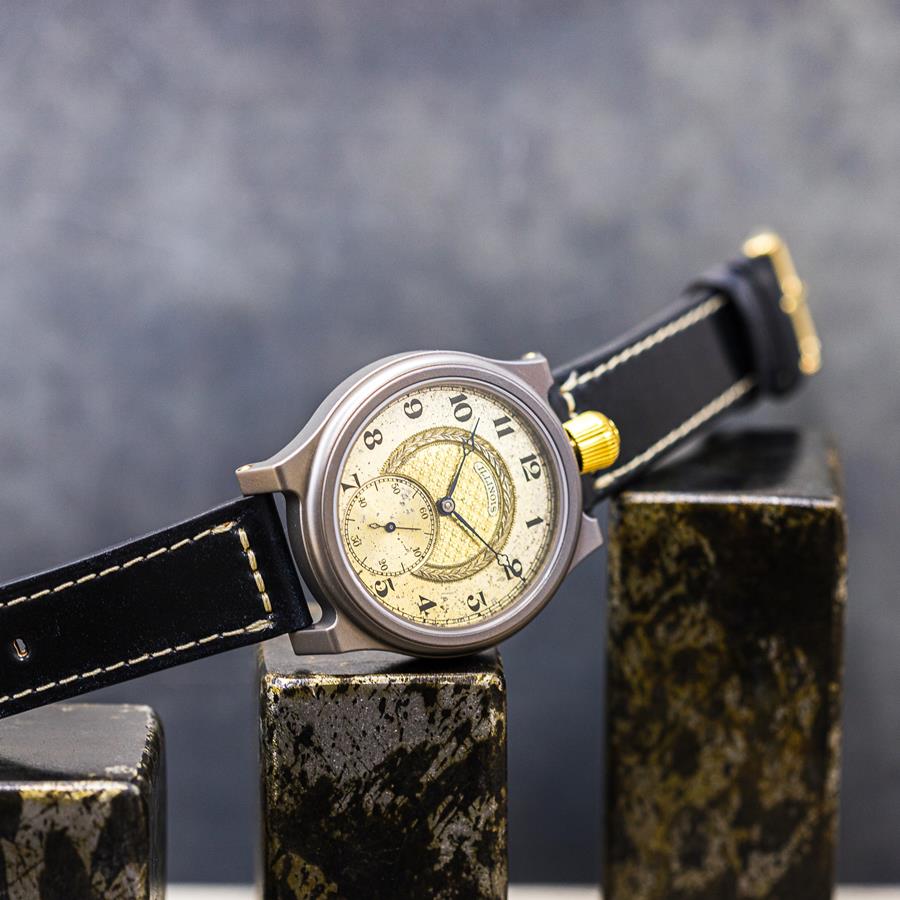 We’re thrilled to showcase this remarkable piece of history that was initially distributed by the Illinois Watch Company a century ago — the Springfield 546. This exquisite antique boasts a cream-colored dial with an intricate and sumptuous golden center design and eye-catching bold black numerals. You can also see the watch face’s matching subdial and blued steel gothic watch hands. We matched this stunning pocket watch with our stylish and powerful Sandblasted Titanium case and topped it off with a gold-plated crown, matching the dial’s unforgettable center design.

Our Sandblasted Titanium case features more than just top-of-line protection — it also comes with a transparent back that displays the pocket watch’s historic 405-grade open-face movement with a breathtaking engraving that reads “The Autocrat.” This handsome dial also features a going barrel, center bridge plate, and 17 opulent jewels that energize its bronze-plated gears. Finally, we equipped this one-of-a-kind watch with our comfortable Cordovan Black leather watch strap, adding further flair to this already-striking piece of history.

The Illinois Watch Company originally manufactured the Springfield 546’s beautiful pocket watch in Springfield, Illinois, in 1922 — the same year the Hollywood Bowl amphitheater opened in the Hollywood Hills of Los Angeles. William Reed and H. Ellis Reed determined the location for the Hollywood Bowl, and they chose the spot because of its close distance to downtown Hollywood and its concave hillside that serves as a natural amplifier.

The amphitheater has hosted numerous musicians, performers, and spectacles through the years, including The Beatles, The Doors, The Jackson 5, The Who, Monty Python, and many more important pop culture icons.

See More Pictures Of This Watch Here
The Boston Railroad 002 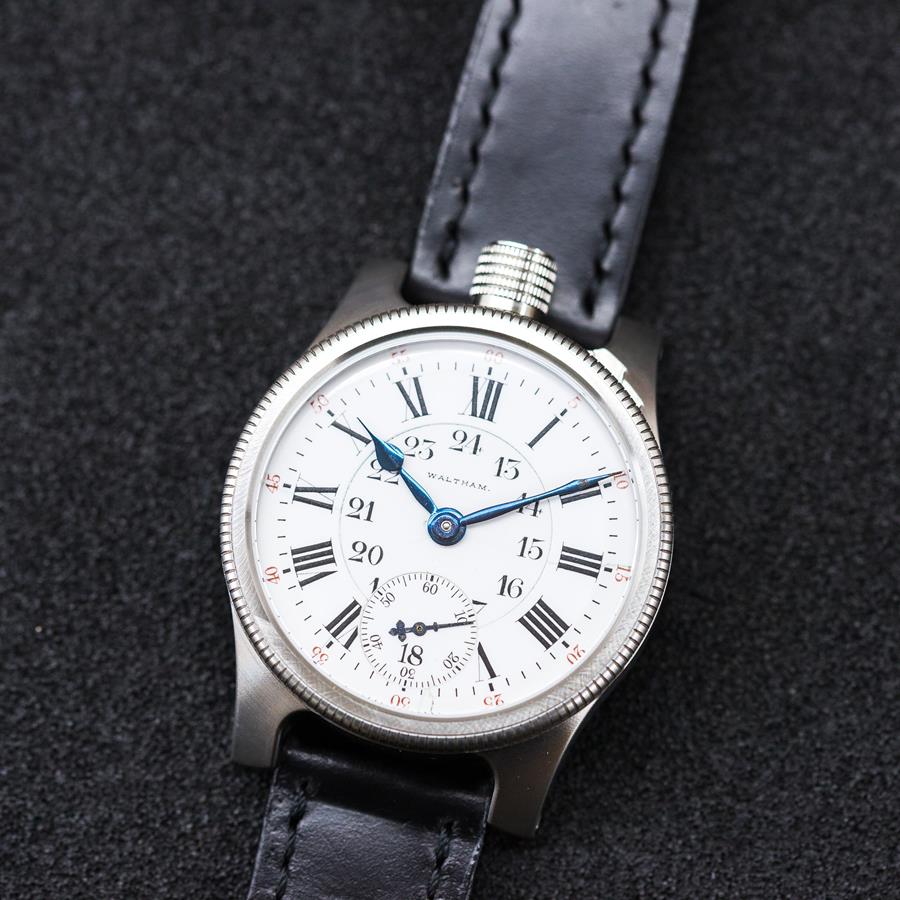 The Railroad Series is back! We’re excited to feature this highly distinct and sophisticated Railroad Watch that was originally manufactured by the American Waltham Watch Company in 1918 — the Boston Railroad 002. This remarkable and intricately-designed Railroad Watch boasts a highly unique dial with bold black Roman numerals indicating the hour and Arabic numerals for calculating military time. The front of the watch also displays a useful subdial and blued steel extra heavy spade & whip watch hands. We matched this antique piece of American history with our robust Machined Titanium Railroad Edition case and topped it off with a nickel-plated crown, making the wristwatch even more special.

Our Machined Titanium Railroad Edition case features a transparent back, allowing you to view the watch’s Vanguard-grade open-face movement with a lever setting. The movement features stunning gilt inlay engravings, including stylish markings that read “Vanguard” and “Waltham, Mass.” The back of the watch also showcases bronze-plated gears powered by 23 jewels throughout its bridge plate. Like with all of our Railroad Edition watches, our case comes with a removable bezel, enabling the watch’s owner to adjust the time, and we also embedded two o-rings underneath the bezel to create a water-resistant seal. Finally, we complemented this unforgettable antique with our comfortable Black leather watch strap.

The American Waltham Watch Company initially released the Boston Railroad 002’s in Waltham, Massachusetts, in 1918 — the same year Corporal Alvin York and his seven men heroically captured an entire German unit during the Meuse-Argonne Offensive in World War I.

York and others were behind enemy lines and had just captured a group of German soldiers when the Germans mounted a surprise attack from a machine gun nest, killing six American soldiers and injuring three others. Fortunately, York and others resided in well-obstructed positions that protected them from the sudden machine gun fire. York and his men killed at least 25 Germans, and with the death toll mounting, the Imperial German Army First Lieutenant Paul Jürgen Vollmer surrendered. York and his team recovered 35 machine guns and captured 132 German soldiers. 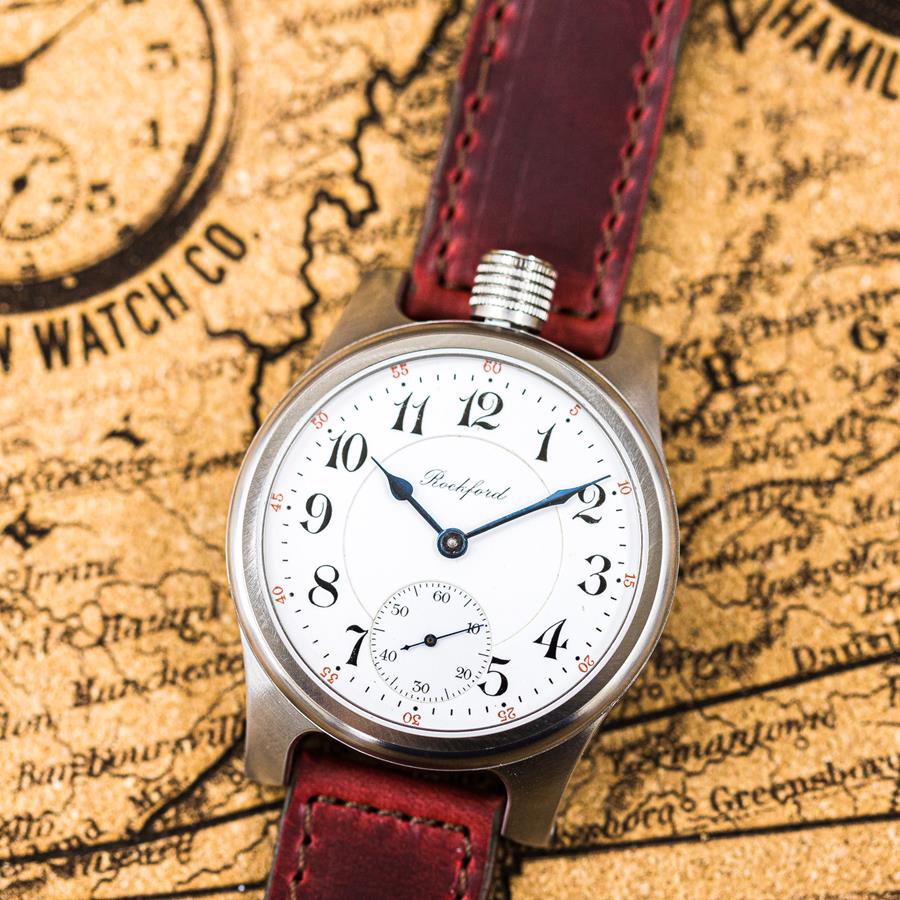 We’re happy to showcase this marvelous piece of history that dates back to 1936 — the Lancaster 163. Our stunning wristwatch features an antique pocket watch originally produced by the Hamilton Watch Company, and it boasts a breathtaking aged dial with distinctly-styled black numerals that look absolutely stunning against the piece’s light-tan background. The face also displays a unique, rotating subdial and silver-colored solid diamond kite watch hands. We matched this sophisticated pocket watch with our powerful Bronzed Titanium case and topped it off with a nickel-plated crown.

The Hamilton Watch Company first released the Lancaster 163’s pocket watch in Lancaster, Pennsylvania, in 1936 — the same year that Congress enacted the Rural Electrification Act. This act was one of the proposals within President Franklin D. Roosevelt’s New Deal, and it provided rural areas with access to electricity. Although electricity was already common in cities at the time, people living on farms and other remote areas across the country largely lacked access before the act passed and was implemented. 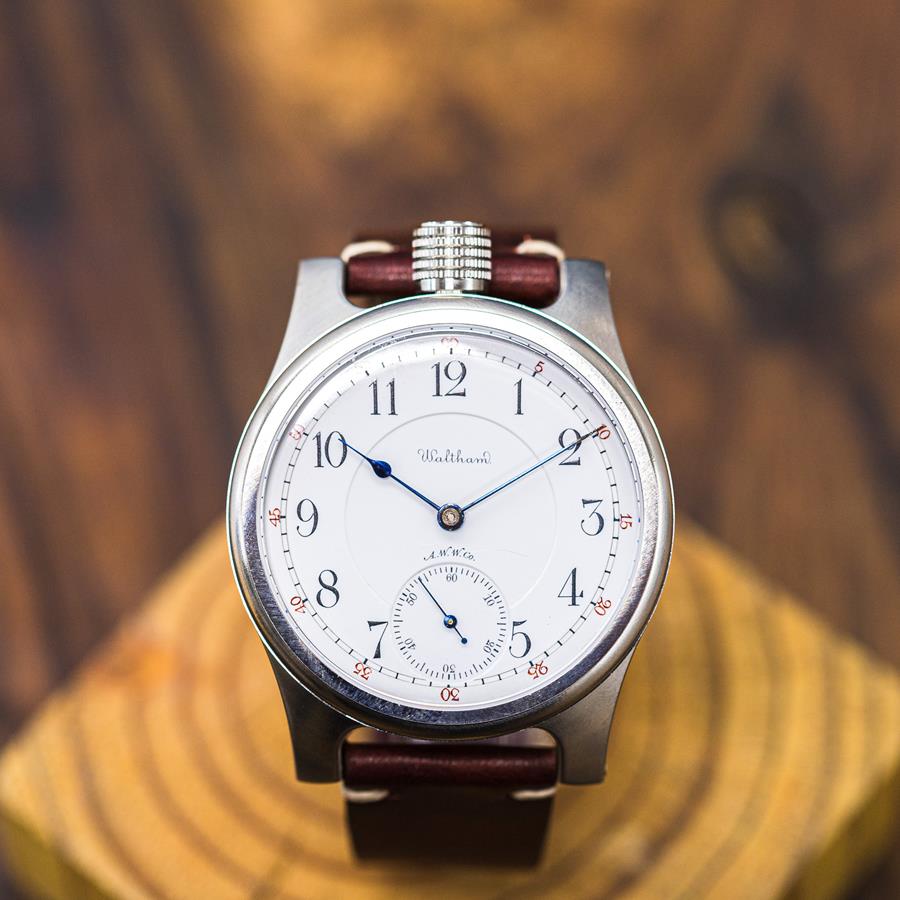 We’re excited to present to you this highly distinct watch originally manufactured by the Illinois Watch Company in 1926 — the Springfield 545. The antique pocket watch movement features a handsome dial with a golden center design pattern. This pattern features an intricate circular outline with stunning vertical lines in the center, some of which are straight while others waver aesthetically. This golden center looks especially stunning against the dial’s light-gray background. Finally, the front of the watch boasts bold, black numerals and blued steel diamond kite watch hands. We encased this breathtaking pocket watch within our Bronzed Titanium case and topped it off with a gold-plated crown, matching the dial’s center pattern.

The back of the watch reveals a remarkable 274-grade open-face movement with a going barrel, Reed regulator, and double barrel escapement. You can also see the movement’s breathtaking bronze-plated gears powered by 21 jewels throughout its ¾ plate. We added our comfortable, artisan-designed Natural leather watch strap to tie the piece together, and this strap complements the wristwatch’s color palette to make the final product even more special.

The Illinois Watch Company initially produced this handsome watch in Springfield, Illinois, in 1926 — the same year that the Aloha Tower was built in Honolulu, Hawaii. The Aloha Tower’s architect, Arthur L. Reynolds, designed the tower in the Hawaiian Gothic architectural style, and it served as an important lighthouse until 1975.

Although the building no longer serves as a lighthouse, it’s still an important Hawaii landmark, and it was added to the National Registry of Historic Places in 1976. 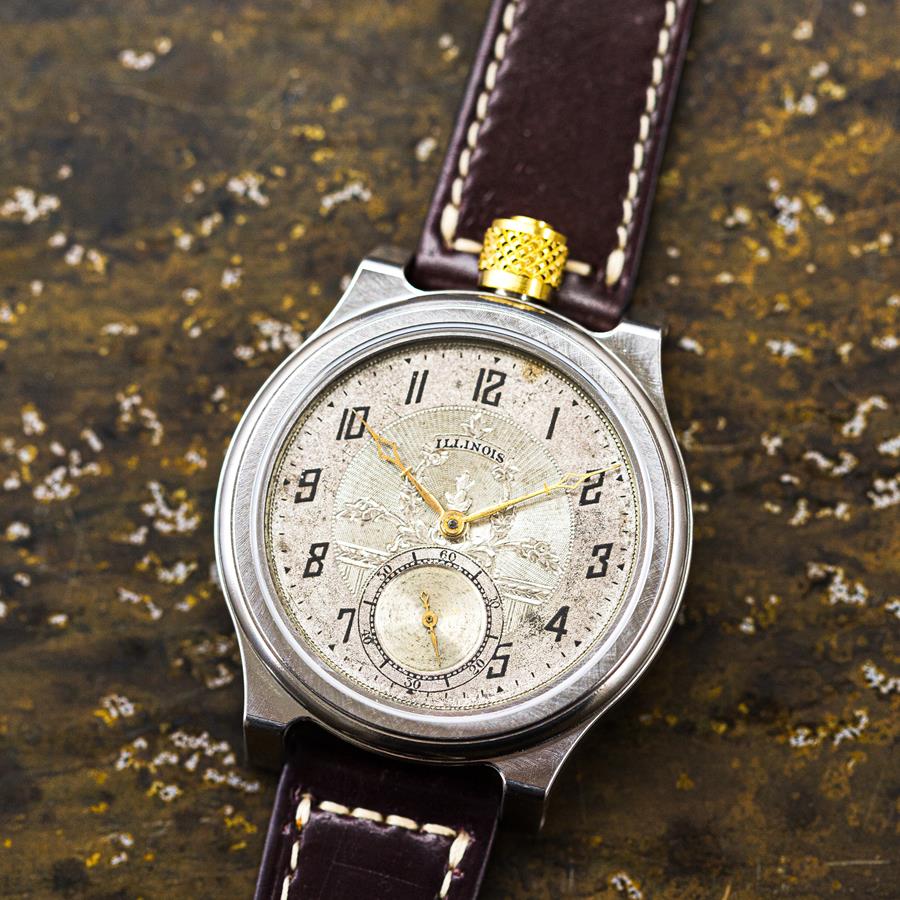 We’re delighted to feature this remarkable piece of history that boasts an antique pocket watch originally manufactured by the Hamilton Watch Company in 1925 — the Lancaster 168. This splendid watch features an aged dial with stylized black numerals that look exceptional against its rustic, light-copper-colored background. The front of this piece also displays stunning violet spade & whip watch hands and a useful subdial. We paired this exquisite pocket watch with our robust, glimmering Machined Titanium case and topped it off with a copper-plated crown that complements the dial’s color palette.

The Hamilton Watch Company produced the Lancaster 168’s breathtaking pocket watch in Lancaster, Pennsylvania, in 1925 — the same year that a special session of the Supreme Court of Texas met that featured all female justices. This was the first all-female supreme court in the United States, and it included Hortense Sparks Ward, Hattie Leah Heneberg, and Ruth Virginia Brazzil.

The all-female Supreme Court of Texas ruled over the case, Johnson V. Darr. The case was brought forth by the Woodmen of the World — a fraternity that’s known today as WoodmenLife — which claimed that they owned two tracts of land in El Paso. The properties were included in a trust and deeded to F. P. Jones. Jones had creditors who came after the land, leading to the legal dispute.

Many lawyers and state officials were members of the Woodmen of the World, including justices Calvin Maples Cureton, Thomas B. Greenwood, and William Pierson. The three justices recused themselves from the case, leading to the all-female supreme court.