Will We See You In New York City?

The Future of Vortic. This Weekend And Beyond!

Your weekly roundup of one-of-a-kind watches AND your weekly delivery of behind-the-scenes, how it's made content is below, but first... are you coming to Windup New York this weekend?!

Windup Watch Fair might now be the largest wristwatch industry event in the world. It's definitely the largest free and open-to-the-public trade show in the USA... and it's this weekend in New York City! We'll be there with our prototypes of this year's Military Edition (for sale November 11th, more information coming this weekend), and tons of other watches.

Over 50 other watch companies will also be there, so if you like watches, and want to do some looking or shopping, this is the place to do it! Respond to this email if you're coming, and mention this email if you stop by! We'll have plenty of surprises for those that do!

What's Next For Vortic? 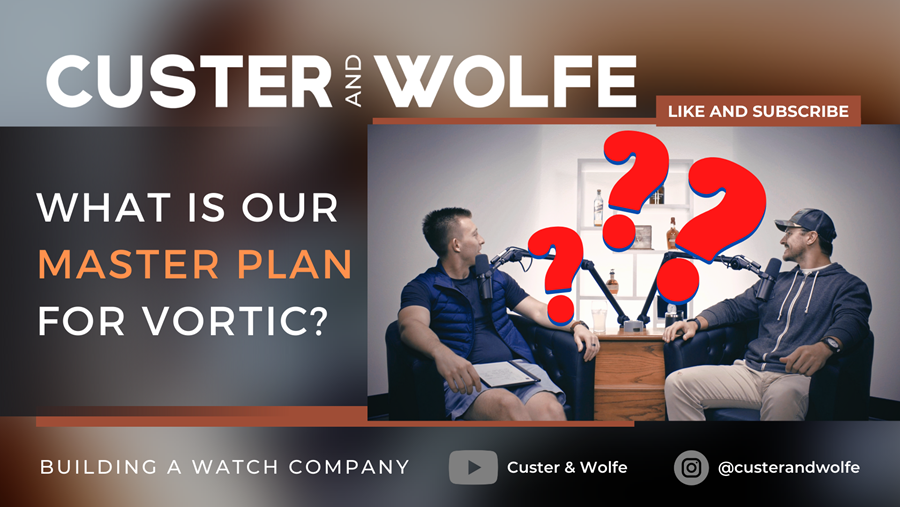 Check out this week's Custer&Wolfe, Building a Watch Company episode to learn more about what's next for our company, our team, and our products!

You know what they say: when it rains, it pours! We always like to stay busy here at Vortic, but somehow it seems like we planned for everything to happen in the same week. We’ve had a video crew in the building the past few days, recording all aspects of the process of making the military edition watches. It’s been a hectic month for us here, but we’re so excited for you to follow our journey!

Every Tuesday we send this Weekly Roundup of our most recent Watch of the Day watches. Some of last week's watches went FAST, so be sure to check the website each day at noon Mountain Time or follow us on social media to get more frequent updates! 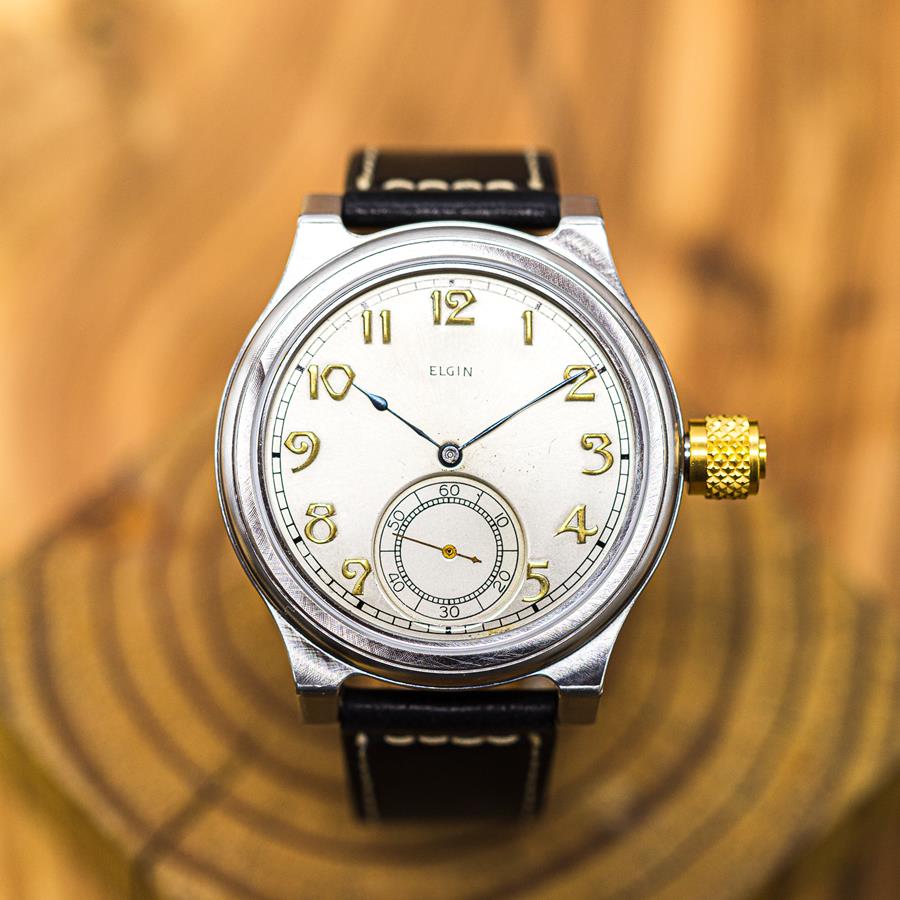 We’re thrilled to showcase this elegant watch originally manufactured by the Elgin National Watch Company 111 years ago — the Chicago 508. This stylish watch features a light-cream-colored dial with distinct, light-golden numerals and a helpful subdial. The front of the movement also displays blued steel spade & whip watch hands that glimmer vividly against the dial. We encased this stunning pocket watch within our scratch-resistant Machined Titanium case and equipped it with a gold-plated crown on the side of the watch perpendicular to our leather watch strap, matching the dial’s golden numerals.

On the back of the watch, you can see the piece’s original 346-grade Hunting movement with a Moseley regulator, Going barrel, nickel finish, and pendant setting. The movement also boasts stunning gold-plated gears powered by 17 sumptuous jewels throughout its ¾ plate. Finally, we topped the piece off with our hand-crafted and comfortable Cordovan leather watch strap, making this one-of-a-kind watch all the more unforgettable.

The Elgin National Watch Company first produced the Chicago 508’s pocket watch in Elgin, Illinois, in 1911 — the same year Orville Wright set a world record with his air glider. The Wright Brothers began using gliders in the early 20th century leading up to the Wright Flyer of 1903, which was the first powered aircraft to sustain flight.

In 1911, Orville Wright returned to Kill Devil Hills in North Carolina — where they previously flew the Wright Flyer — along with Alec Ogilvie in order to test the glider’s automatic control system. The pair ended up not testing the system because reporters were there, but Orville established an impressive gliding record: He glided in a 40 miles per hour wind for 9 minutes and 45 seconds, a record that would remain until German aerospace engineer Dr. Wolfgang exceeded a 13-minute flight in 1921. 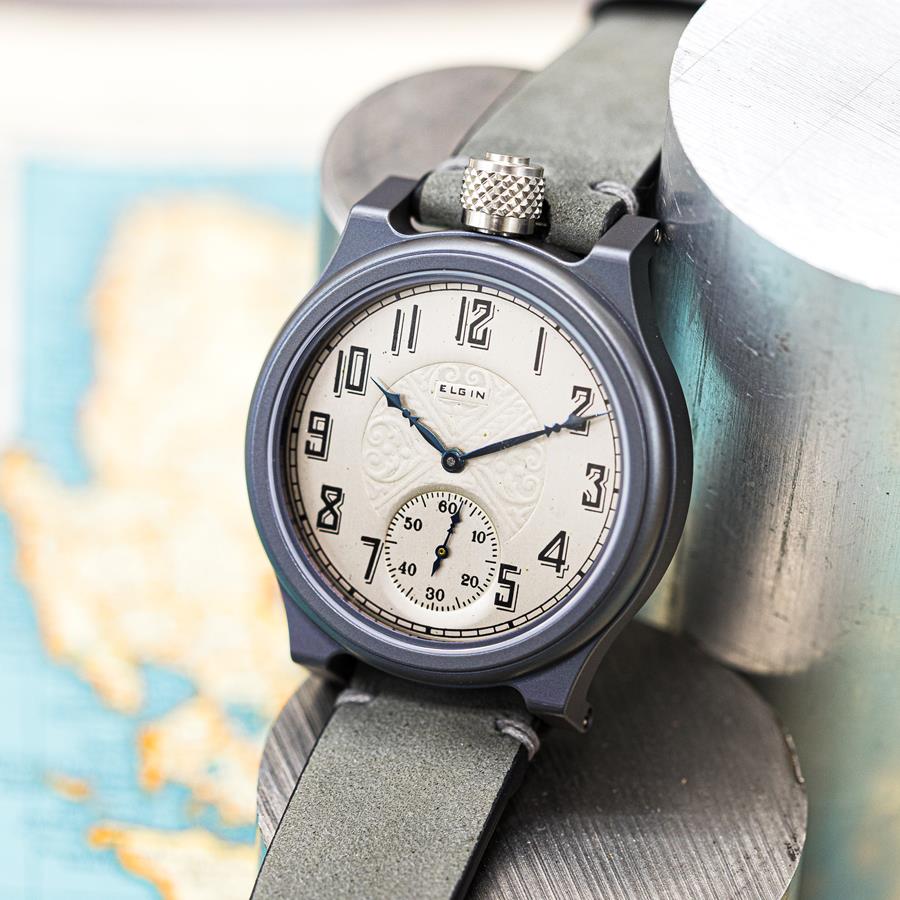 We’re happy to present to you this stunning wristwatch that features a pocket watch from nearly a century ago — the Chicago 509. The Elgin National Watch Company originally manufactured the Chicago 509’s historic pocket watch, and it features an elegant cream-colored dial. The dial boasts bold black numerals with transparent drop shadows, blued steel solid diamond kite hands, and a matching subdial. We encased this remarkable pocket watch within our powerful and stylish Blued Titanium case and equipped it with a nickel-plated crown.

Our Blued Titanium case features an open back, enabling horologists and watch lovers to view the pocket watch’s intricate inner workings, including a 477-grade open-face movement with a ¾ plate, nickel finish, and a pendant setting. Additionally, the movement features a quick train, Moseley regulator, Breguet hairspring, and a going barrel. Finally, this historic movement showcases 17 screw-set ruby and sapphire jewels that power its sumptuous gold-plated gears. We matched the watch with our Stone leather watch strap, adding even more style to this fashionable piece of history.

The Elgin National Watch Company initially produced the Chicago 509’s pocket watch in Elgin, Illinois, in 1925 — the same year the New York Giants became a football team. Tim Mara established the football team by investing $500, and under Mara’s ownership, the team won the NFL Championship Game in 1927, 1934, 1938, and 1956 — these championships all occurred pre-Super Bowl, which was created in 1966.

The first game that the New York Giants played was against the All New Britain team, a now-defunct team that was based out of New Britain, Connecticut. After the 26-0 victory, the team went on to finish the season 8-4.

See More Pictures Of This Watch Here
The Chicago 505 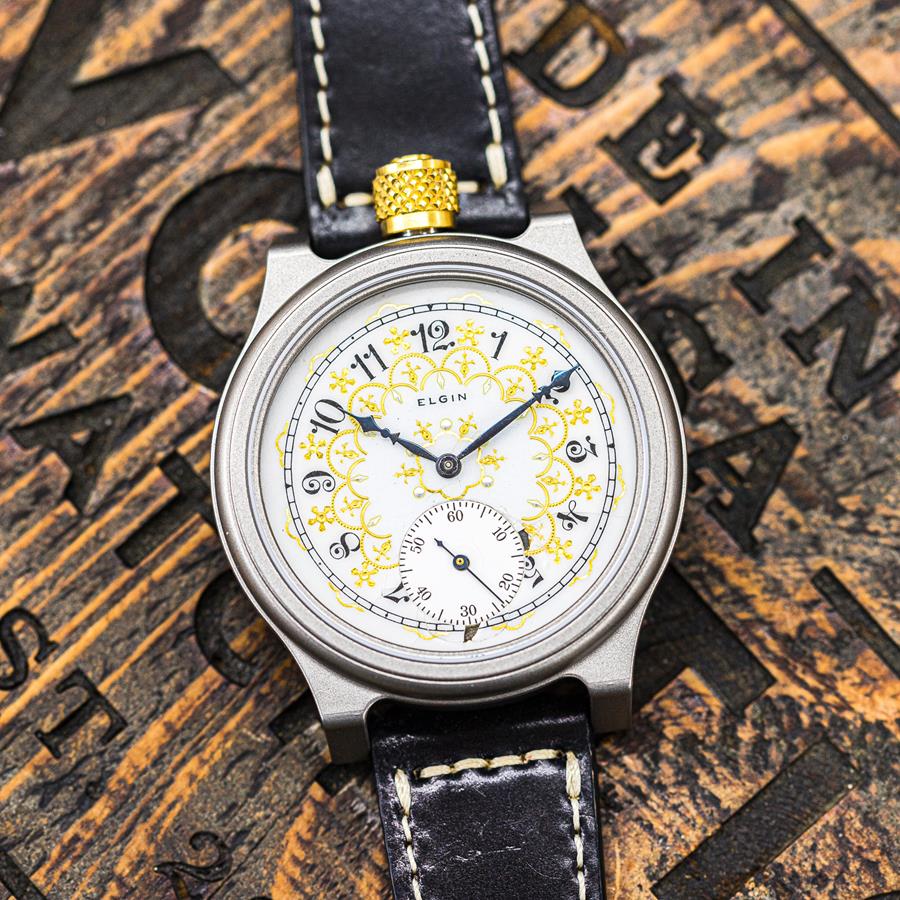 We’re pleased to showcase this sophisticated and sumptuous watch initially produced by the Elgin National Watch Company 101 years ago — the Chicago 505. This historic watch features a splendid single-sunk dial with stylish black numerals and gilt patterns across its pristine, white background. The front of the watch also features dark blue solid diamond kite hands and a second-keeping subdial. We paired this eye-catching pocket watch with our robust Sandblasted Titanium case and topped it off with a gold-plated crown, matching the dial’s elegant gilt details.

On the back of the watch, you can view the piece’s 345-grade open-face movement with a quick train, going barrel, Moseley regulator, and Breguet hairspring. The watch’s movement also boasts gold-plated gears powered by 17 screw-set ruby and sapphire jewels throughout its ¾ plate. Finally, we made this unforgettable, one-of-a-kind pocket watch wearable with our artisan-designed Cordovan Black leather watch strap.

The Elgin National Watch Company originally manufactured the Chicago 505’s pocket watch in Elgin, Illinois, in 1921. That same year, the first Sweetest Day was held in Cleveland, Ohio. Sweetest Day is a holiday observed across the midwest that emphasizes small acts of kindness. On the third Saturday of October every year, observers celebrate by giving away candy and greeting cards.

The holiday was created by a committee of candy makers and other confectioners, and on the first Sweetest Day — October 10, 1921 — the committee gave out over 20,000 boxes of candy to underprivileged children and adults.

If you’re reading this on October 15, 2022, then today is Sweetest Day, so go celebrate by giving your loved ones sweet treats and other small symbols of love and kindness. 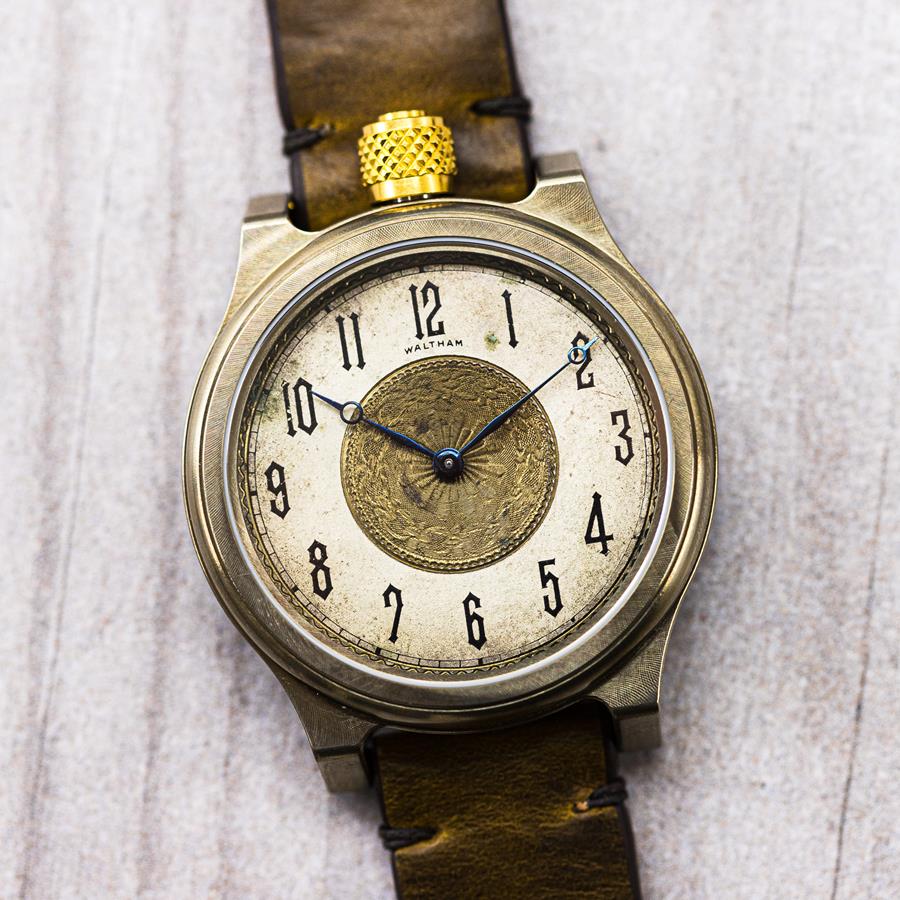 We’re delighted to feature this eye-catching and highly distinct watch originally manufactured by the American Waltham Watch Company over a century ago — the Boston 473. The front of this sophisticated watch boasts a light-tan-colored background with a splendid bronze-colored center. You can also see the dial’s thin and distinct black numerals and its blued steel heavy moon watch hands that glimmer vividly. We matched the dial’s color palette by encasing it within our robust Gilded Titanium case and paired it with a sumptuous-looking gold-plated crown.

Our Gilded Titanium case boasts a transparent back, enabling watch enthusiasts to view its antique 225-grade hunting movement with 17 remarkable screw-set jewels that power its gold-plated gears. The watch’s movement also features a nickel finish, pendant setting, Breguet hairspring, and patent regulator. To top the piece off, we equipped it with our Natural leather watch strap, further complementing the dial’s breathtaking center.

The American Waltham Watch Company initially produced this stunning piece of history in Waltham, Massachusetts, in 1919 — the same year famed WWII pilot Francis Stanley “Gabby” Gabreski was born. Gabby made a name for himself by becoming one of seven United States combat pilots to become a flying ace, meaning he shot down over five enemy aircraft in two separate wars. He’s credited with 34 enemy aircraft takedowns.

In addition to being an exceptional fighter pilot, he used his Polish heritage to serve as a liaison for Polish Royal Air Force squadrons. He learned from their talented pilots during his time with them and flew a total of 20 missions with them in 1943.

After World War II, the Air Force assigned him to complete his education at Columbia University, where he studied Russian and earned a Bachelor of Arts in Political Science. He again saw combat during the Korean War, and in 1967, he retired from the military as a colonel. 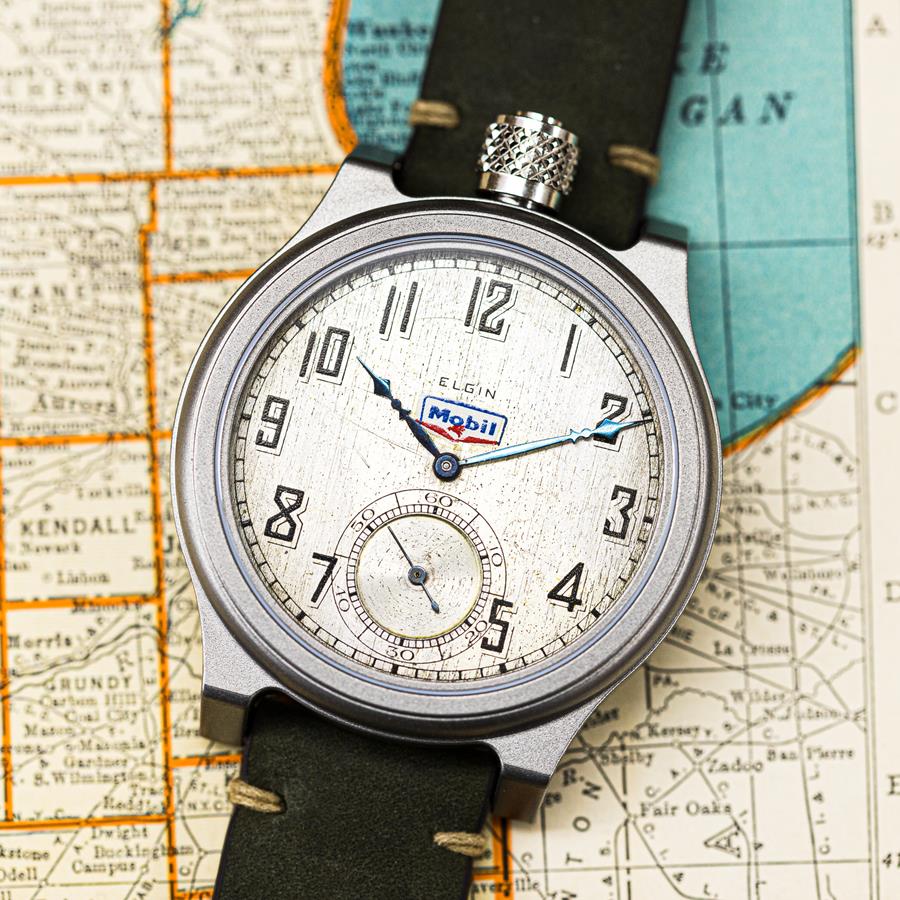 We’re thrilled to present to you this stunning watch initially produced by the Elgin National Watch Company over a century ago — the Chicago 506. This antique pocket watch movement features a highly unique dial with a classic Mobil logo from 81 years before the company merged with Exxon. The front of the watch also features stylish black numerals with transparent drop shadows and blued steel solid diamond kite watch hands that look exceptional against its light background. We encased this sophisticated pocket watch within our powerful Sandblasted Titanium case and equipped it with a glimmering nickel-plated crown.

On the watch’s rear side, you can see its breathtaking 345-grade open-face movement with a Moseley regulator, Breguet hairspring, quick train, and going barrel. You can also view the pocket watch’s remarkable gold-plated gears powered by 17 ruby and sapphire jewels throughout its ¾ plate. Finally, we topped this one-of-a-kind watch with our hand-crafted and comfortable Olive leather watch strap. 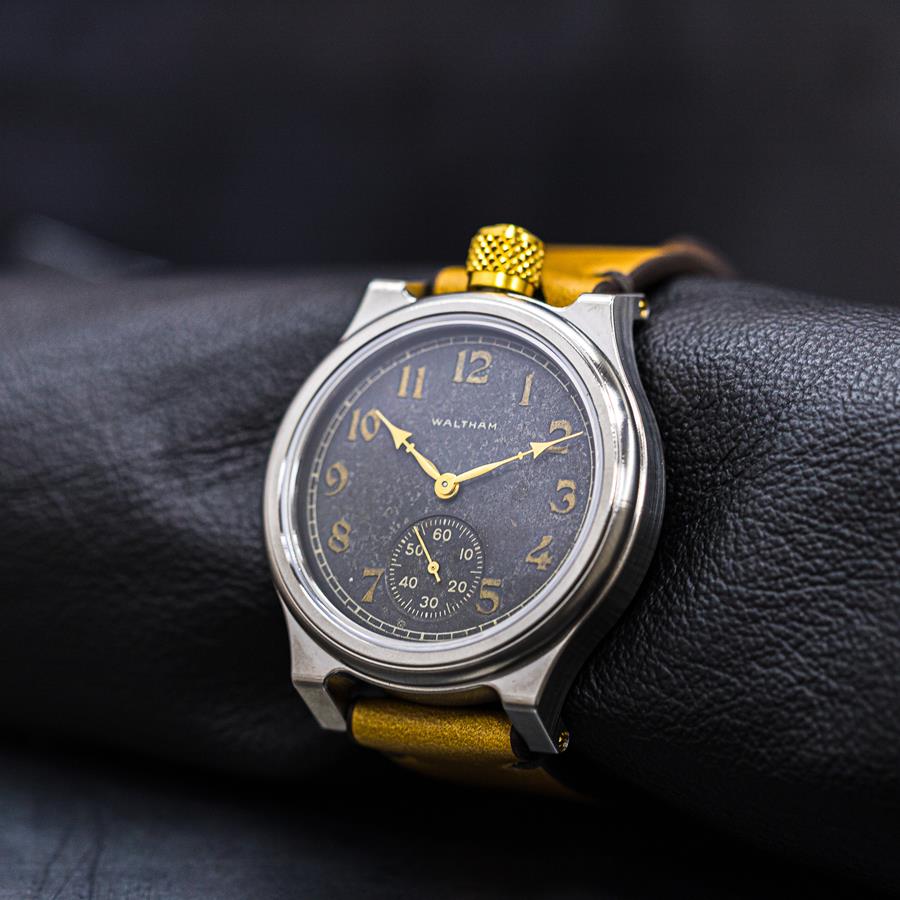 We’re excited to showcase this truly unforgettable watch initially produced by the American Waltham Watch Company in 1926 — the Boston 471. This historic watch boasts an incredibly unique dial with dark golden numerals and a distinct charcoal background. The front of the piece also displays a utilitarian subdial and sumptuous gold-colored solid arrow watch hands. We emphasized the watch’s unusual and stunning dial by pairing it with our robust Machined Titanium case, and we topped it off with a gold-plated crown, matching the dial’s watch hands.

On the back, you can view the pocket watch’s original Premier-grade open-face movement with a nickel finish, pendant setting, and center bridge plate. The back of the piece also boasts 21 remarkable jewels that energize its powerful bronze-plated gears. Finally, we equipped this stunning watch with our comfortable, hand-crafted Rye leather watch strap, tying together this splendid one-of-a-kind piece.

The American Waltham Watch Company originally manufactured this eye-catching watch in Waltham, Massachusetts, in 1926 — the same year legendary American icon Andy Griffith was born in Mount Airy, North Carolina. Griffith was known for various works in film and television, including A Face in the Crowd, No Time for Sergeants, Matlock, and The Andy Griffith Show.

In addition to being an accomplished actor, he was also a southern gospel singer and writer, and he was inducted into the Country Gospel Music Hall of Fame in 1999. He received other various recognitions for his achievements in media, including the Presidential Medal of Freedom, a Grammy Award, a star on the Hollywood Walk of Fame, and even his own museum in Mount Airy, North Carolina.