The "Why" Behind The Military Edition

The "Why" Behind The Military Edition

We have your weekly round-up below, but first...

Have you read the book Start With Why?

The bottom line is... why do you do what you do? From your core values to the words coming out of your mouth. What do you stand for?

The Military Edition will be Thursday's Watch of the Day, and we'd like to share our WHY behind it so you know our true north. Hopefully, it will give this purchase you are about to make even more meaning. 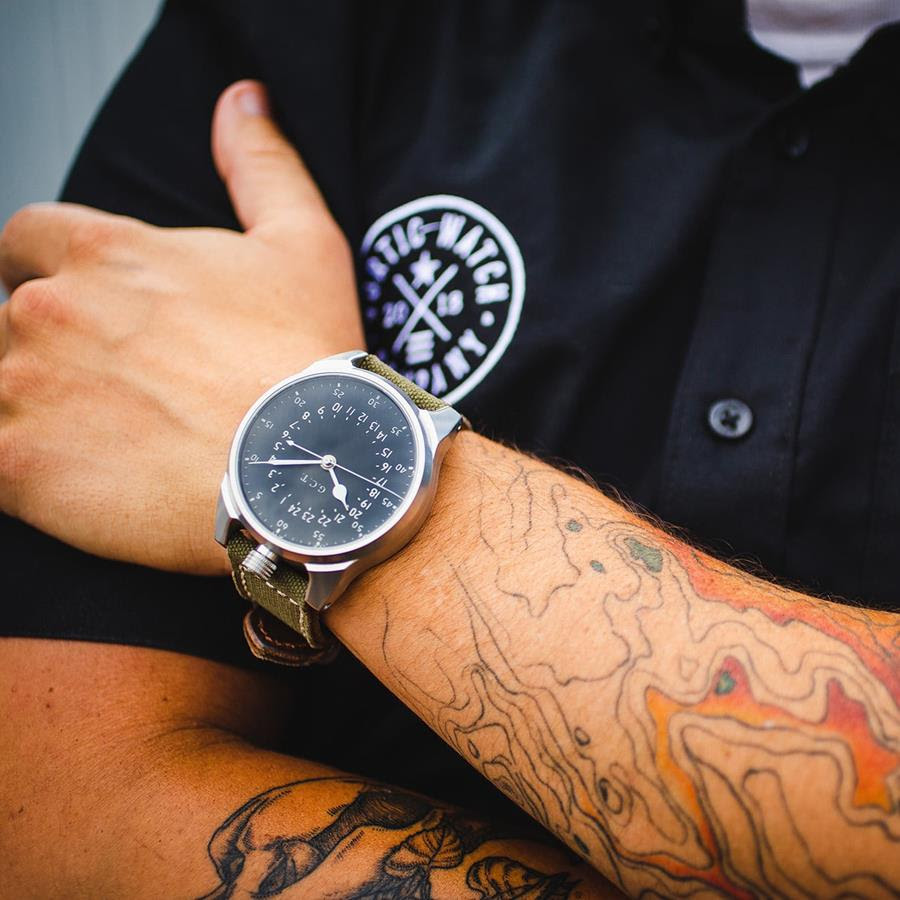 November 11th is a big day for all of us here at Vortic, but it's also Veterans Day, and we'll never forget it.

By investing in the Military Edition you are supporting the past, present, and future of American watchmaking.

It's a bold statement, but it's true. There is a piece of American military history inside each of these watches. It is such an honor to salvage, restore, and preserve these for you but the objective of this message is to shine a light on the men and women who do the hardest work. 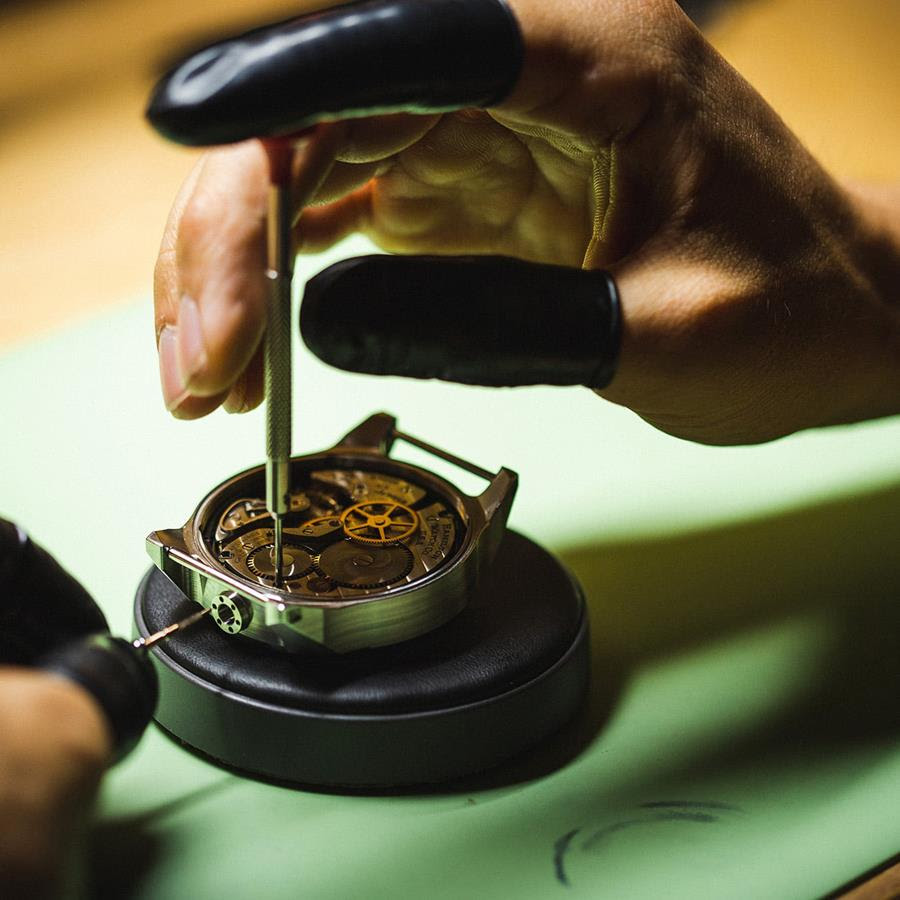 This is why we do it. The Veterans Watchmaker Initiative in Odessa, Delaware. This is a school that specializes in training US Military Veterans on how to become professional watchmakers.

Why does that matter? Well, the world needs more watchmakers. We need more watchmakers. The Achille's heel of our industry is that there are not enough skilled workers to restore the antique pocket watch movements we use in our wristwatches, much less even fixing all the vintage Rolex's and Omega's everyone has now. 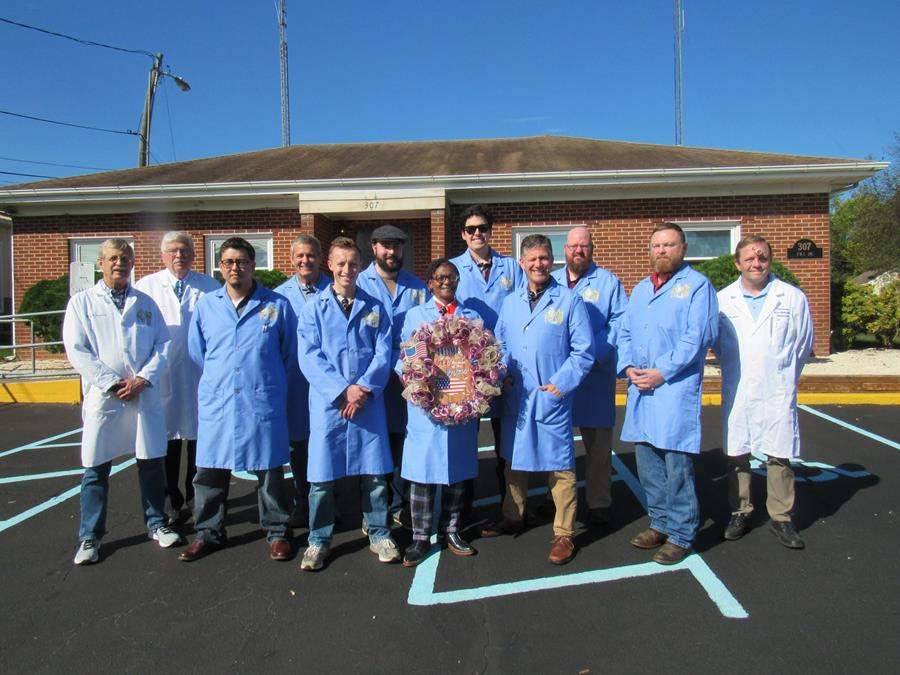 The Veterans Watchmaker Initiative is the only one of its kind. Specializing in training disabled veterans, the school can and will train any honorably discharged individual. To say they are the perfect non-profit to align with would be an understatement.

Other US-based watchmaking schools have had their funding reduced or have been significantly impacted by Covid-19, so at this point, the Veterans Watchmaker Initiative might be the last remaining school in America.

Learn More About And Donate To The VWI 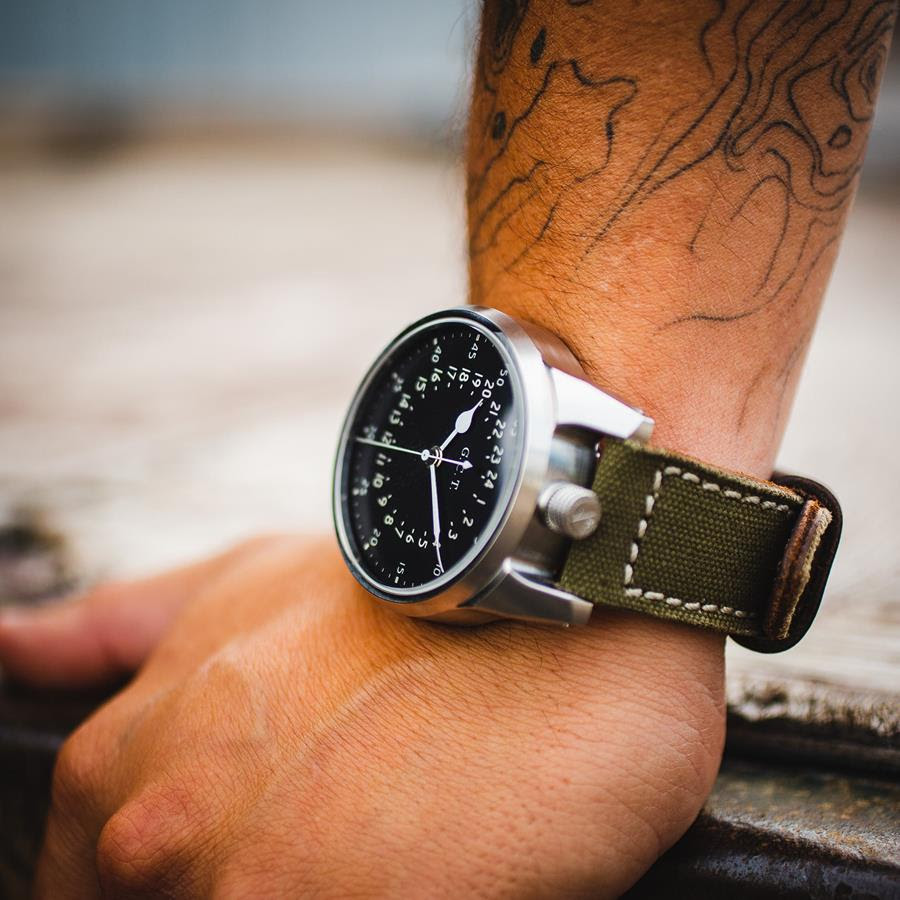 We're headed back out on the road this week and we will be back in Arizona at the Fountain Festival of Fine Arts & Crafts! We loved getting to see so many of you at this event last spring so please, come back and see us.

We will be booth number B77!

**Note this event does not start until the day after the launch of the Military Edition, and we may not have any left to purchase. We will have a tradeshow model for you to try on though!

Ave. of the Fountains & Saguaro Blvd.
in Fountain Hills, Arizona

The time is now (pun intended) to pick your one-of-a-kind Vortic Watch. Our team has been working hard to provide you with a variety of unique timepieces. Take a look, there's something for everyone!

Click the images of the watches to learn more about them.  Make sure to check the website at 12 PM Mountain Time for the Watch of the Day! They tend to sell quickly. 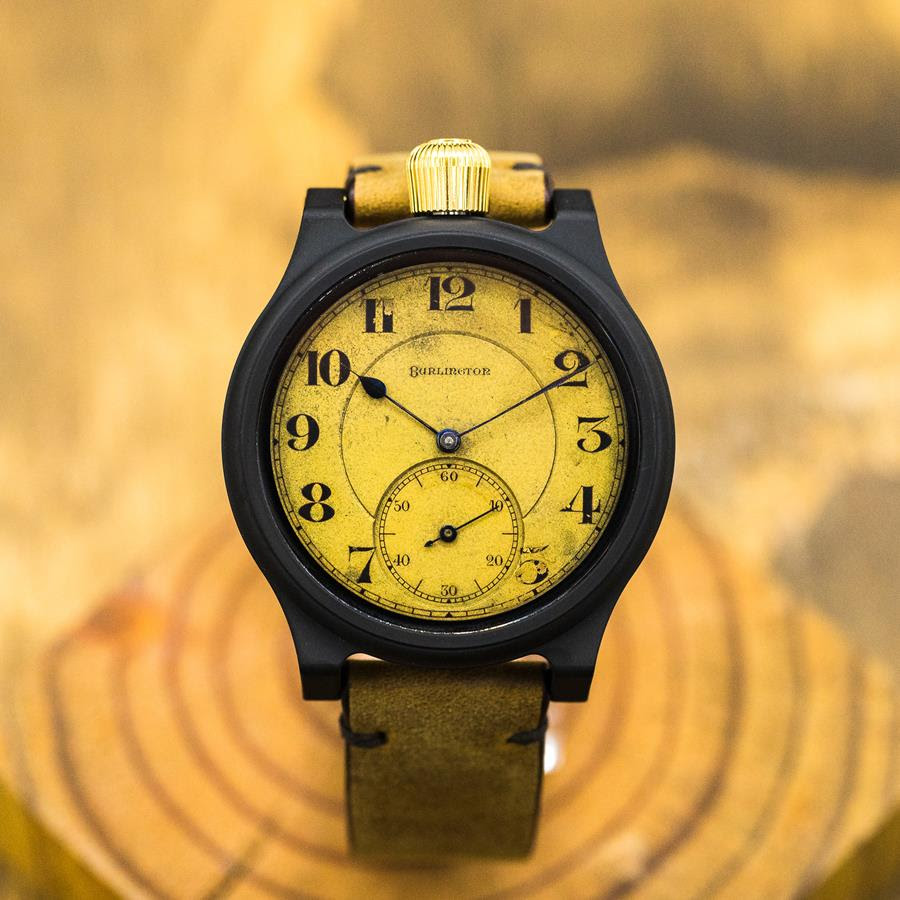 For today’s Watch of the Day we bring you this amazing timepiece from the Burlington Watch Company, our Burlington 019. This stunning watch has us captivated by the unique look of the dial, with subtle signs of aging on the numerals that tell the story of its long life. We love the soft gold-colored tones of the face and decided to complement it with our gold-plated crown and Yukon strap, as well as gold-plated hardware throughout. Everything is cased in this stunning black DLC case and accented by the very bold hands that have a wonderful dark blue finish.

As we turn the watch over to reveal the movement, we are immediately drawn to the fine details that are customary to Burlington. These watches were contract-built by the Illinois Watch Company, which is where we find a lot of visual cues to the build plates and design. Burlington only used the highest grade movements that Illinois made at the time, which is evident with the 21 beautiful jewels spread throughout, as well as gold-plated gears beneath this custom-shaped bridge plate. Stainless steel hardware and accents bring attention to all of the finer details and make everything pop nicely. This watch was originally produced in Springfield, Illinois all the way back in 1916. In April of this year, Congress passed the National Parks Service Act, setting up the management of our parks systems all across the country. 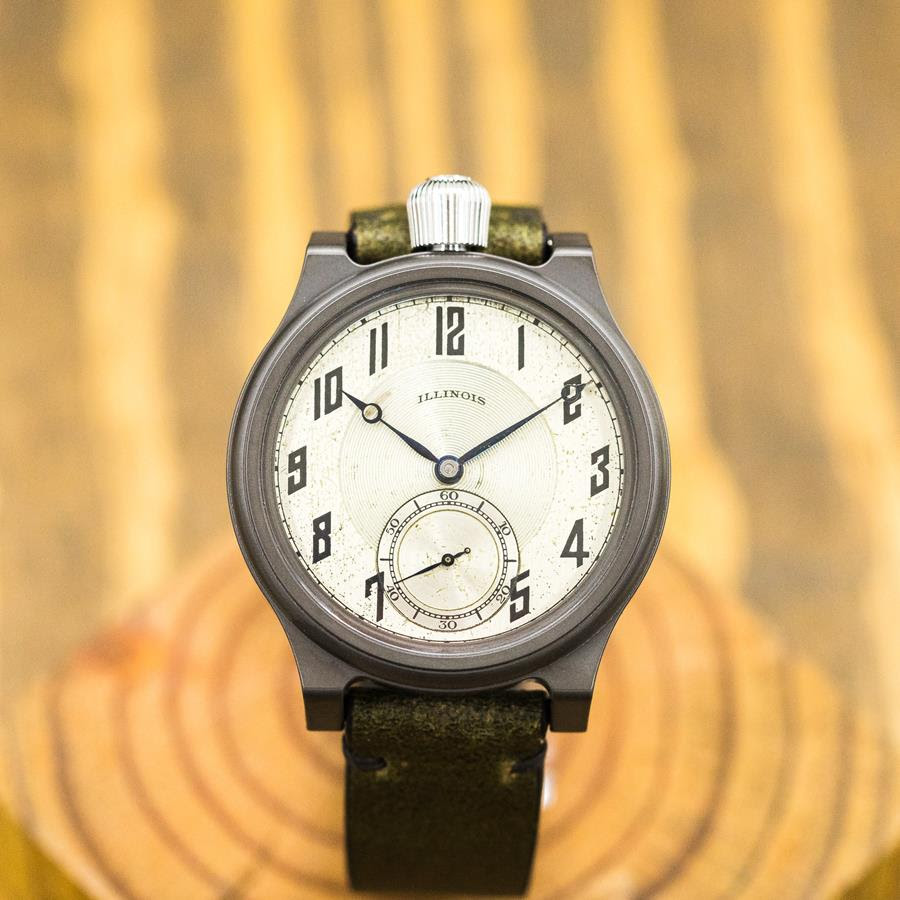 We are happy to present this beautiful watch from the Illinois Watch Company, our Springfield 449. We love the vintage feel of this watch, with the dial showing its age to remind us of the different paths and stories that may have carried throughout the years. The dark blued-steel hands stand out nicely in contrast to the soft feel of the dial, bringing out the different earth tones that carry throughout. The nickel-plated crown grabs your attention, while the dark color of this gunmetal case ties everything together in a cohesive manner.

As we turn the watch over to reveal the inner workings of the movement, we are immediately drawn to the James A Garfield insignia in the center of the bridge plate. Garfield was the 20th president of the United States of America from March to September of 1881, only serving four months before an unfortunate assassination. Illinois used this insignia on their 306, 427, and this 425-grade movement, with this particular model being part of a short run of 8,200. The intricate patterns that have been carefully machined throughout the different build plates show the craftsmanship of the time and bring a wonderful visual appeal to this beautiful movement. Adorned by 17 screw-set jewels as well as rose-gold gears beneath that peak through the different layers of moving parts.

This watch was originally produced by the Illinois Watch Company in Springfield, Illinois in 1923. In February, the very first live broadcast of an ice hockey game took place in Toronto, Canada. The game was called by Norman Albert and was an intermediate playoff game for the Ontario Hockey League. 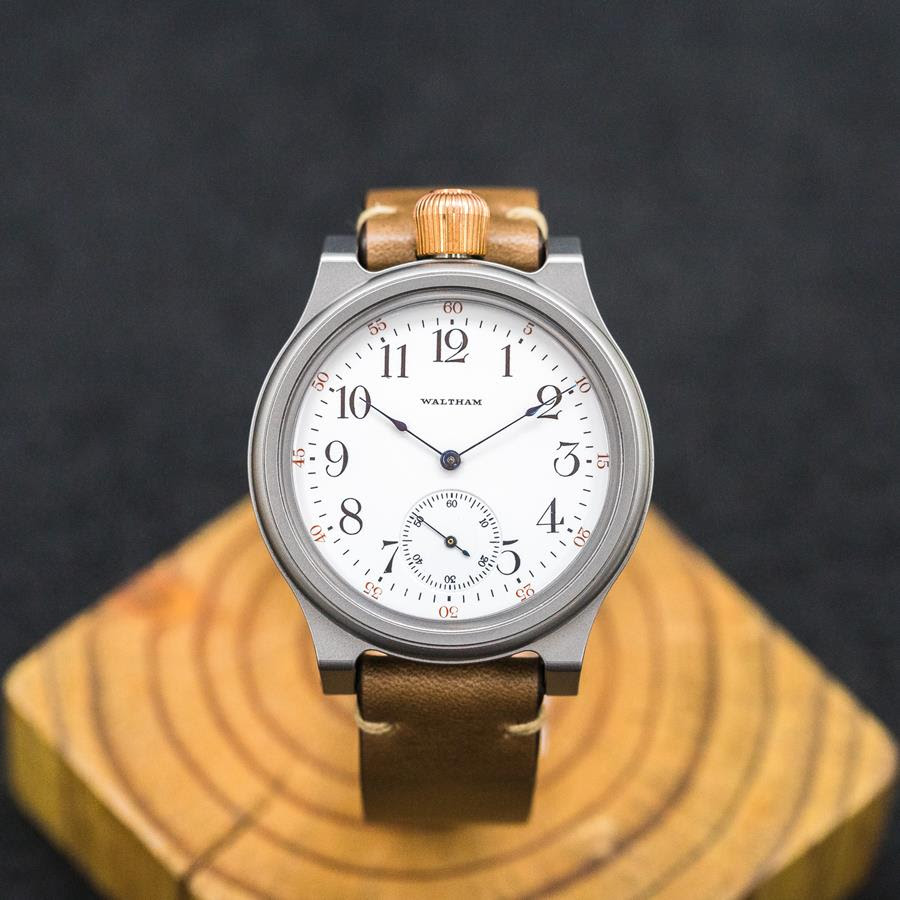 Here we bring you this fantastic timepiece originally from the Waltham Watch Company, our Boston 394. There is something truly special about finding these antique watches with such clean and pristine dials that stand out so nicely. We absolutely love the modern feel of this watch, with a dial that also features red minute indicators all around the outside of the numerals. Our sandblasted titanium case completes the look with this soft appearance that lets the small details shine through. Our copper crown blends perfectly with this natural strap and copper hardware throughout.

We are mesmerized by the movement that powers this watch, with such exquisite detail in the carefully machined patterns all throughout the build plates. The visual movement that is created by the damaskeened patterns will keep your eye exploring all the different layers of complexity that make up this beautiful watch. 17 jewels help turn the rose-gold gears beneath, with stainless steel hardware keeping everything in place nicely. This watch was originally produced in Waltham, Massachusetts all the way back in 1917. In March of this year, Jeanette Rankin of Montana became the first woman member of the United States House of Representatives. 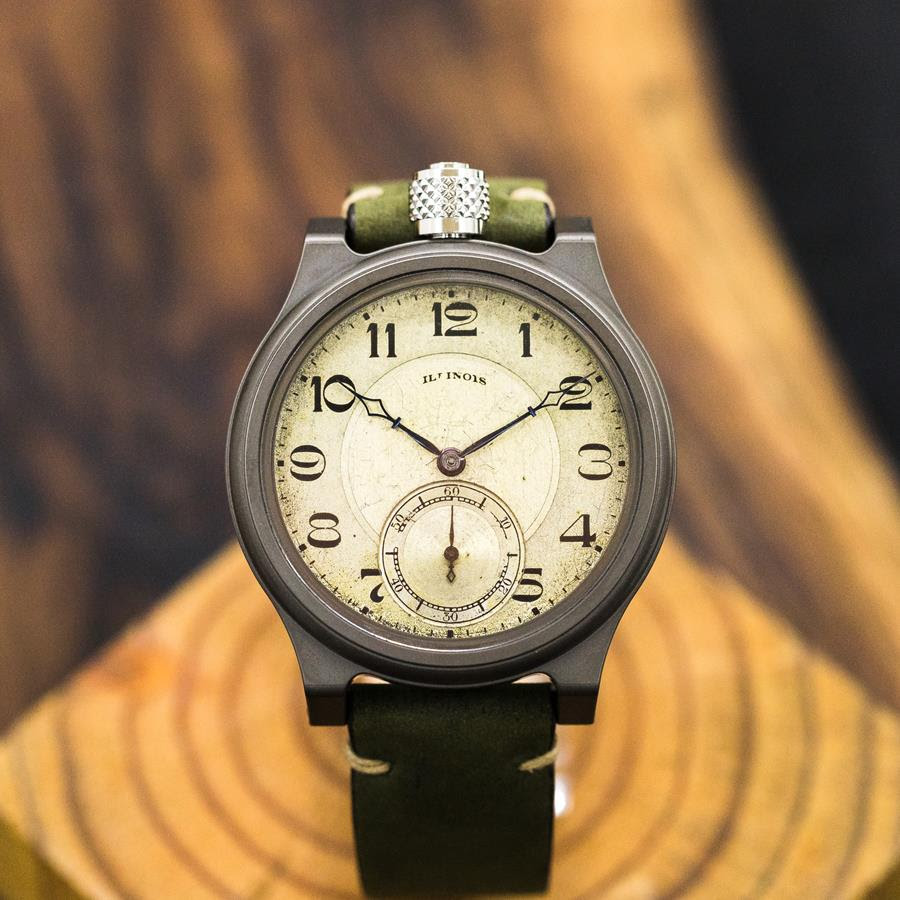 We are thrilled to release this amazing watch from the Illinois Watch Company, our Springfield 438. We really love how the different earth tones of this softly aged dial work well with this gunmetal titanium case and decided to add in an additional touch of green with our marsh strap. These open kite hands stand out with their blued-steel finish, while the nickel-plated crown and hardware add a touch of flare.

As we turn this watch over to reveal the movement inside, we are immediately drawn to the clean and crisp Geneva lines that are showcased all across the multiple build plates. More stainless steel hardware holds down the 17 screw-set jewels that are sprinkled throughout to keep everything spinning smoothly. Gold-plated gears and a brass balance wheel add some additional color to keep the eye moving all around this complicated movement.

This watch was originally manufactured by the Illinois Watch Company in Springfield, Illinois in 1923. This is also the first year that we saw electric, automatic traffic lights entering the roads in America. Garrett Morgan invented and patented the first traffic light that was designed in a T shape, and had three different lights used to stop all of the traffic at an intersection before signaling one section to continue moving. He later sold the patent to General Electric for $40,000. 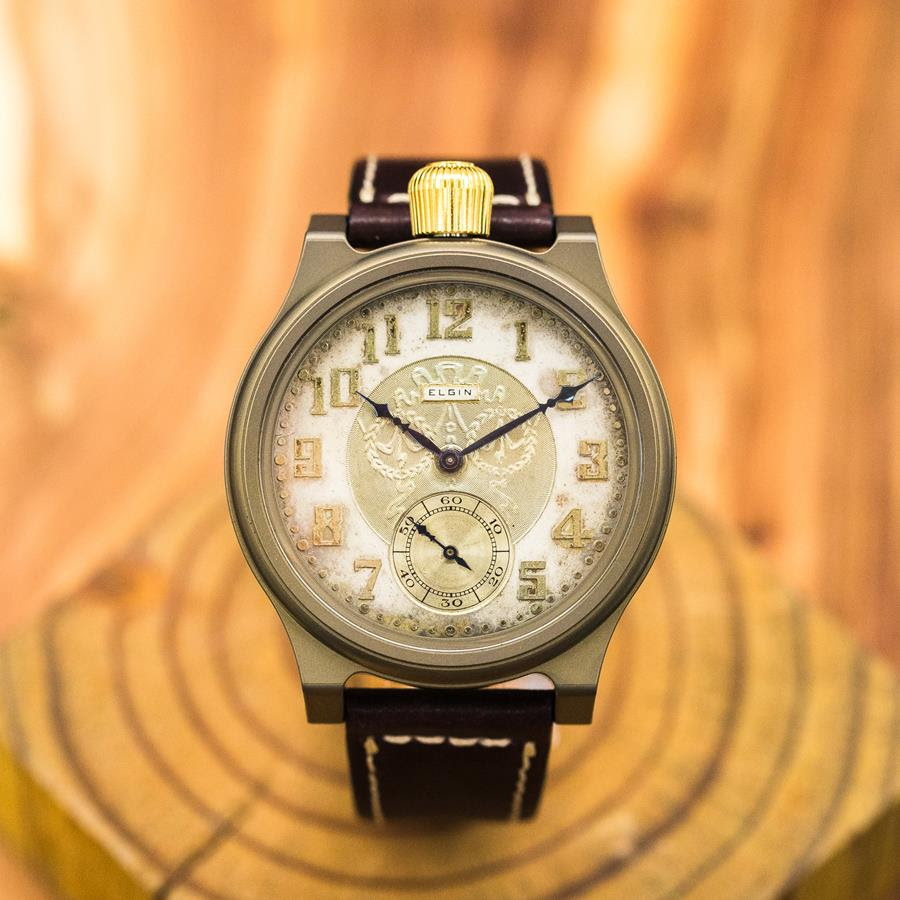 We present to you this incredibly unique timepiece, originally produced by the Elgin National Watch Company. We are very excited to showcase this watch with a very special case color option, our very own bronzed titanium. We have a very talented research and development team in-house that is always trying to innovate and diversify our product options in order to bring even more one-of-a-kind options to our weekly lineup of watches.

This case is actually made of titanium that has been treated and baked in a kiln at very specific temperatures in order to create this bronze appearance on the case. Unlike bronze, this case will stay looking like this and will not tarnish or darken over time. We absolutely love how the aged numerals match the tone of the case and crown, with a very aged appeal that brings out the character of this watch. These dark, blued-steel hands jump out in contrast and work well to balance the different visual elements.

Some of the discoloration also shows through on the movement itself as we turn the watch over, with some of the build plates beginning to show their age as well. Adorned by 17 screw-set jewels to keep the gold-plated gears turning nicely, as well as the crown wheel and mainspring barrel that stands out with these fantastic radial designs. This watch was originally produced in Elgin, Illinois in 1923. In February of this year, an incredibly large explosion occurred at Dawson’s Mine No.1 in Dawson, New Mexico. The explosion collapsed most of the mine and killed 120 men, with only two miners able to walk out alive.