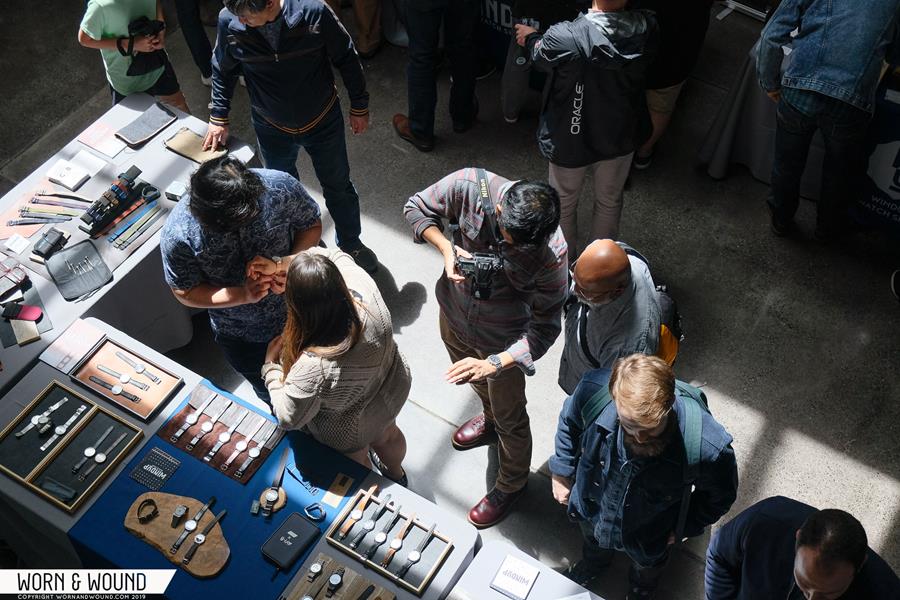 Join us the weekend of July 15th-17th in Chicago at Venue West in the West Loop for the WindUp Watch Fair! This is a watch event you do not want to miss. A few months ago we had the pleasure of participating in their San Francisco event and it was by far one of our favorite shows of the year!

We will bring a curated selection of our available watches that you can check out and purchase on the spot. If you're in the Chicago area, and want to see our watches in person, try them on, meet one of our founders, etc, now is the time! Check it out this Friday, Saturday, or Sunday and mention this email for a special prize in-person only!

Join Us on Our Journey!

It's here! Episode #9 of Custer & Wolfe, Building a Watch Company: Vortic’s $250,000 Manufacturing Grant = More US Jobs! In the midst of unexpected delays moving into the new shop, we received the greatest news. We acquired the $250,000 Advanced Manufacturing grant from the State of Colorado to continue supplying incredible jobs for American Machinists and further improve our watch quality! In this episode of Custer & Wolfe, we dive into the specifics of how this grant will shape Vortic’s future, and we end with a sneak peek of the new building.

Every couple of weeks you can expect a new episode on our Custer & Wolfe YouTube channel so make sure you are subscribed! Now that we're officially MOVED into our new building, look out for new and different episodes coming your way soon! 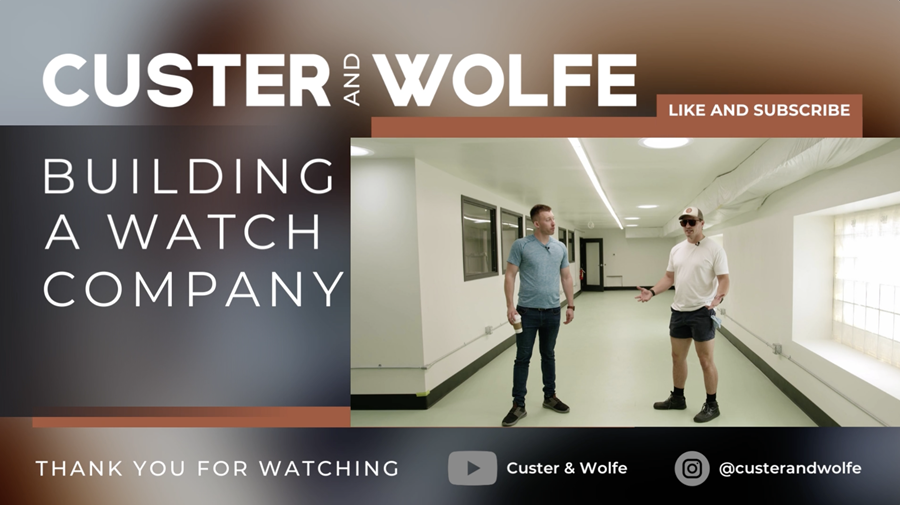 "White dials with large bold numerals like this are typically seen more often in the Railroad pocket watches. I love that it has that feature even at a smaller size!" - Tyler 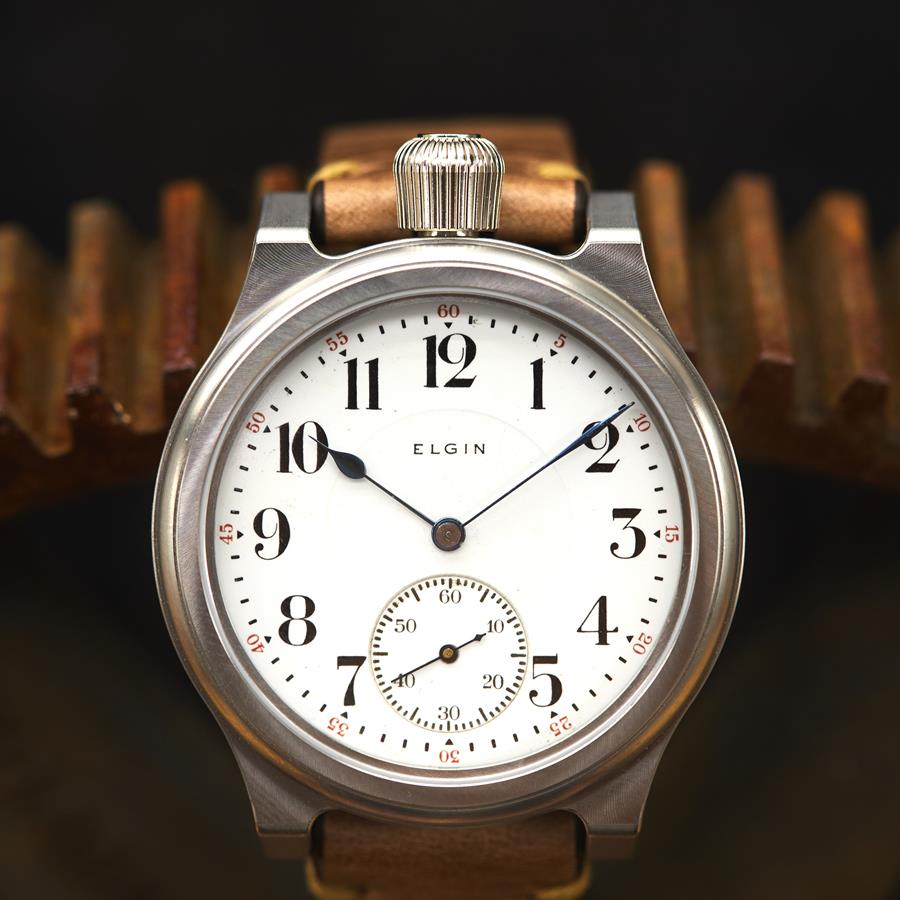 Today, we’re delighted to feature this exquisite timepiece initially produced by the Elgin National Watch Company in 1921 — the Chicago 481. The original pocket watch boasts a refined dial with bold black numerals, red minute numerals, and dark blue spade and whip hands. These sophisticated details look exceptionally breathtaking against its pristine light eggshell background. We complemented the original pocket watch and added to its opulent style by encasing it within our robust and scratch-resistant Machined Titanium case. We also equipped the piece with a matching nickel-plated crown.

Our Machined Titanium case features a transparent back, enabling watch enthusiasts to view its 384-grade open-face movement with a ¾ plate featuring 17 screw-set ruby and sapphire jewels. The antique movement also includes additional stunning details, including a going barrel, quick train, Moseley regulator, Breguet hairspring, and gold-plated gears. To top it off, we matched it with our comfortable Natural leather watch strap, enabling the owner to wear this one-of-kind piece of history.

The Elgin National Watch Company originally manufactured the pocket watch in Elgin, Illinois, in 1921 — the same year American race car driver Tommy Milton won his first Indy 500. What was especially remarkable about his victory was that Ralph DePalma led the race for 109 laps, establishing a world record that remained until 1988, and he was leading by two laps at the race’s halfway point. Tragically, One of DePalma’s connecting rods broke during his historic run, forcing him to drop out of the race. Tommy Milton won the race along with riding mechanic Harry Franck. Milton was famous for having only one functional eye, which would have disqualified him from the race today. He went on to win the Indy 500 a second time two years later. 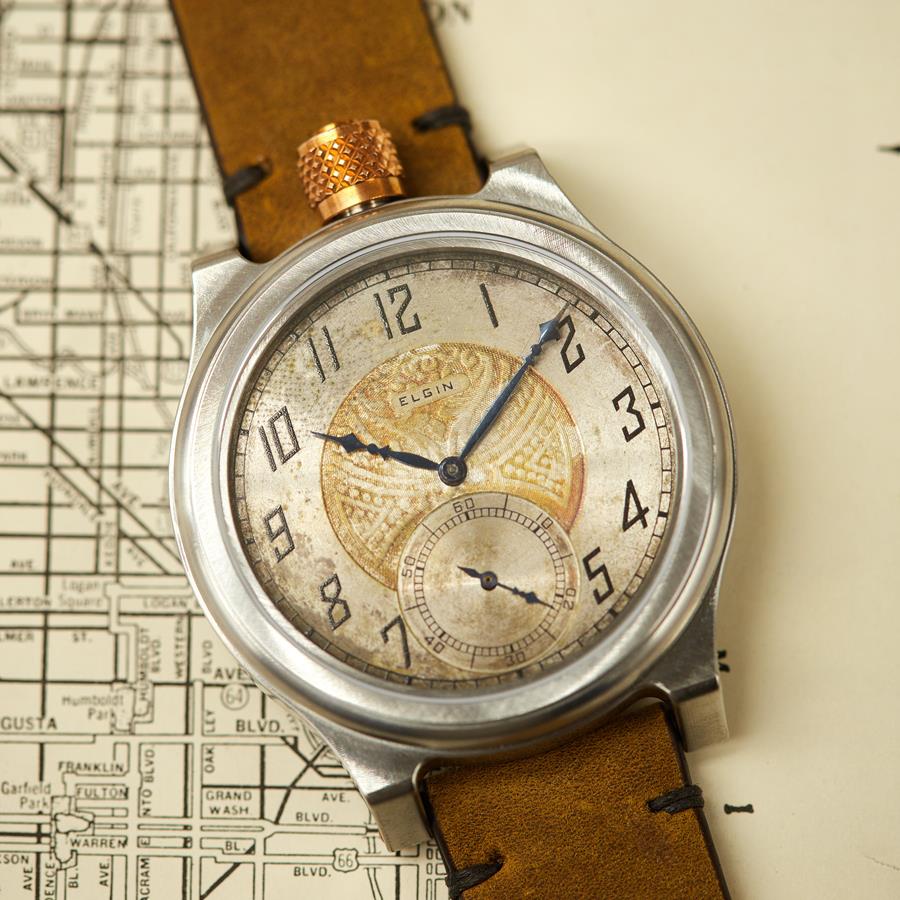 We’re pleased to present this stunning antique originally manufactured by the Elgin National Watch Company in 1927 — the Chicago 482. This historic pocket watch boasts an eye-catching dial with a rustic tan background and a highly unique center pattern. It also features stylized black numerals and blue-tinted solid diamond kite hands. We encased Elgin’s pocket watch within our scratch-resistant Machined Titanium case and equipped it with a striking copper crown that matches the dial’s distinct color.

On the back of the watch, you can view the pocket watch’s 477-grade open-face movement with a Breguet hairspring, Mosley regulator, and going barrel. The piece also contains robust and sumptuous gold-plated gears powered by 17 screw-set ruby and sapphire jewels throughout its ¾ plate. Finally, we complemented the final product by matching it with our comfortable, artisan-designed Rye leather watch strap, making this brilliant, one-of-a-kind timepiece even more special.

The Elgin National Watch Company initially produced the Chicago 482’s pocket watch in Elgin, Illinois, in 1927 — the same year Holland Tunnel opened, connecting New Jersey and New York. The tunnel runs under the Hudson River, and before its construction, travelers could only cross the lower Hudson River by using a ferry. The tunnel was the longest underwater vehicular tunnel in the world when it opened, and it was also the world’s first tunnel to be mechanically ventilated. This iconic tunnel was named after Clifford Milburn Holland, the tunnel’s original chief engineer, who died of a heart attack three years before the tunnel’s completion.

The Lancaster 150 (R.T.'s pick)
"This dial is very similar to my personal watch worn in court defending us in the Hamilton v Vortic trial." - R.T. 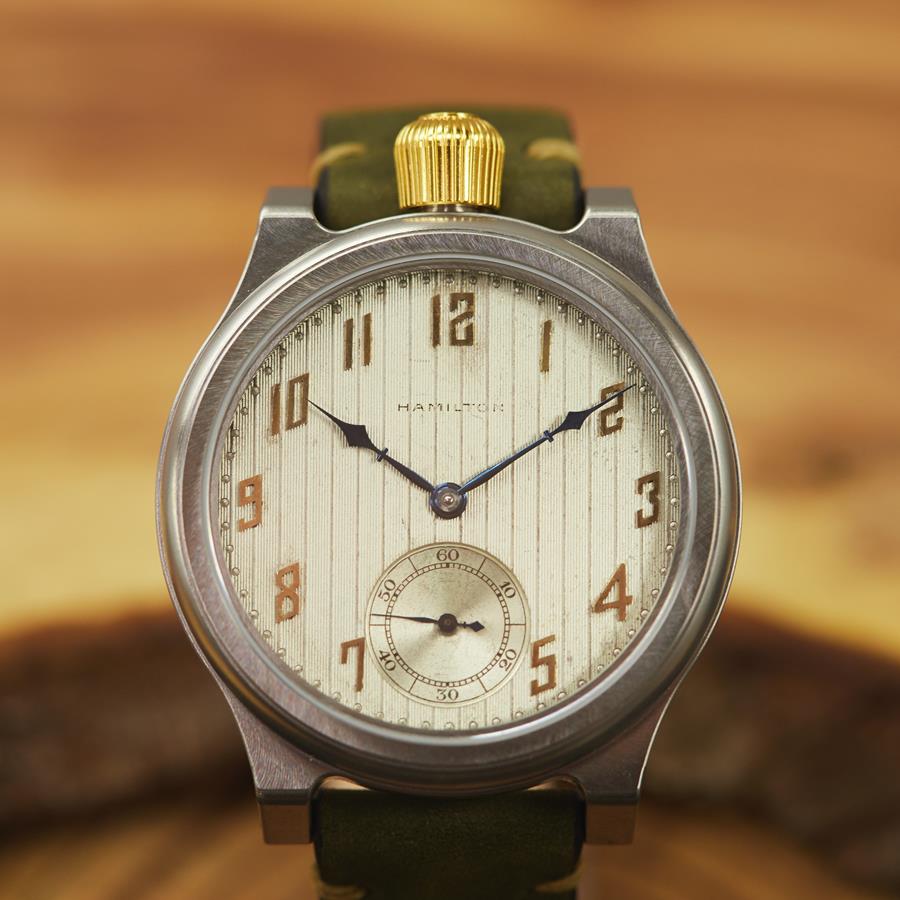 We are excited to bring you this magnificent timepiece from the Hamilton Watch Company, our Lancaster 150. We love the character that is displayed on this antique dial, showing the true age of this watch. The styling of the vertical lines that have been carefully machined onto the dial leads your eye to the outer edge where we find 60 small minute indicators. Gold-colored numerals pair well with our gold-plated crown and hardware topped off with our olive green strap.

As we turn this watch over to reveal the movement within, right away we are drawn to more gold-plated elements, with these wonderful gears peaking through this large ¾ build plate. The damaskeened lines all across this unique plate design show the true craftsmanship of the time and are something we really love and appreciate from Hamilton. 17 screw-set jewels bring a little more visual charm to this beautiful display, with the nickel-plated hardware giving them a little extra flash to complement the precious metal throughout.

This watch was originally manufactured by the Hamilton Watch Company in Lancaster, Pennsylvania in 1923. In Egypt this same year, King Tutankhamun's tomb was opened by Howard Carter. He began his work in Egypt back in 1891, with a number of different projects throughout that time, as well as a brief break during WWI when all operations were put on hold. Carter and his team eventually found the entry steps to Tutankhamun’s tomb in November of 1922 and didn’t make their way into the burial chamber until February 1923. Work on the tomb continued and wasn’t completed until 1932, ten years later. 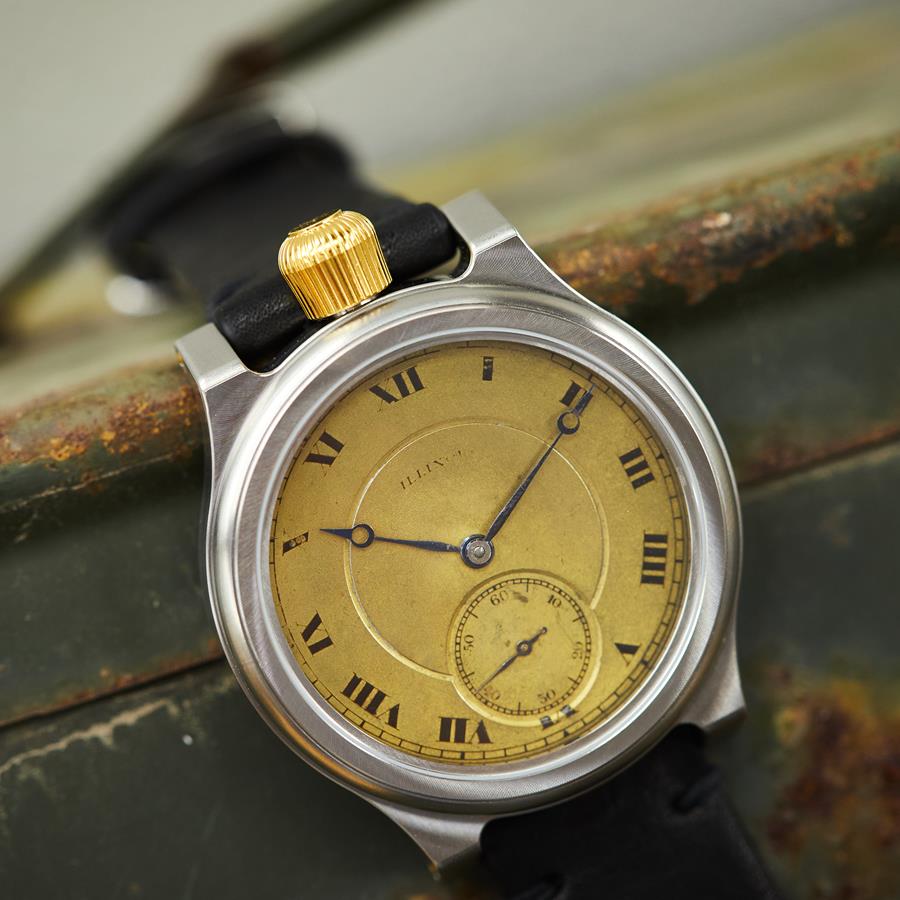 We’re delighted to feature this eye-catching and luxurious watch originally manufactured by the Illinois Watch Company over a century ago — the Springfield 514. This stunning watch boasts an opulent-looking gold-colored dial with bold, black roman numerals. It also features a matching subdial with numerical minute indicators and blued-steel full moon hands. We encased this one-of-a-kind pocket watch within our robust and scratch-resistant Machined Titanium case and equipped it with a gold-plated crown that matches the piece’s dial.

Our Machined Titanium case features a transparent back, revealing its 405-grade open-face movement with a gorgeous engraving that reads “The Autocrat.” The back of the watch also presents stunning bronze-plated gears powered by 17 jewels throughout its center bridge plate, and it features a going barrel. Finally, we paired this sumptuous watch with our comfortable, artisan-designed Black Stout leather watch strap, complementing the lavishly-styled dial.

The Illinois Watch Company produced the Springfield 514’s pocket watch in 1916 — the same year C. Francis Jenkins founded the Society of Motion Picture Engineers, today known as the Society of Motion Picture and Television Engineers (SMPTE). SMPTE is an international network of engineers and other media professionals working in movies, television, and other digital formats. SMPTE is primarily known for establishing and implementing broadcasting standards, such as the famous SMPTE color bars, a television pattern used to test for accurate colors in North America. 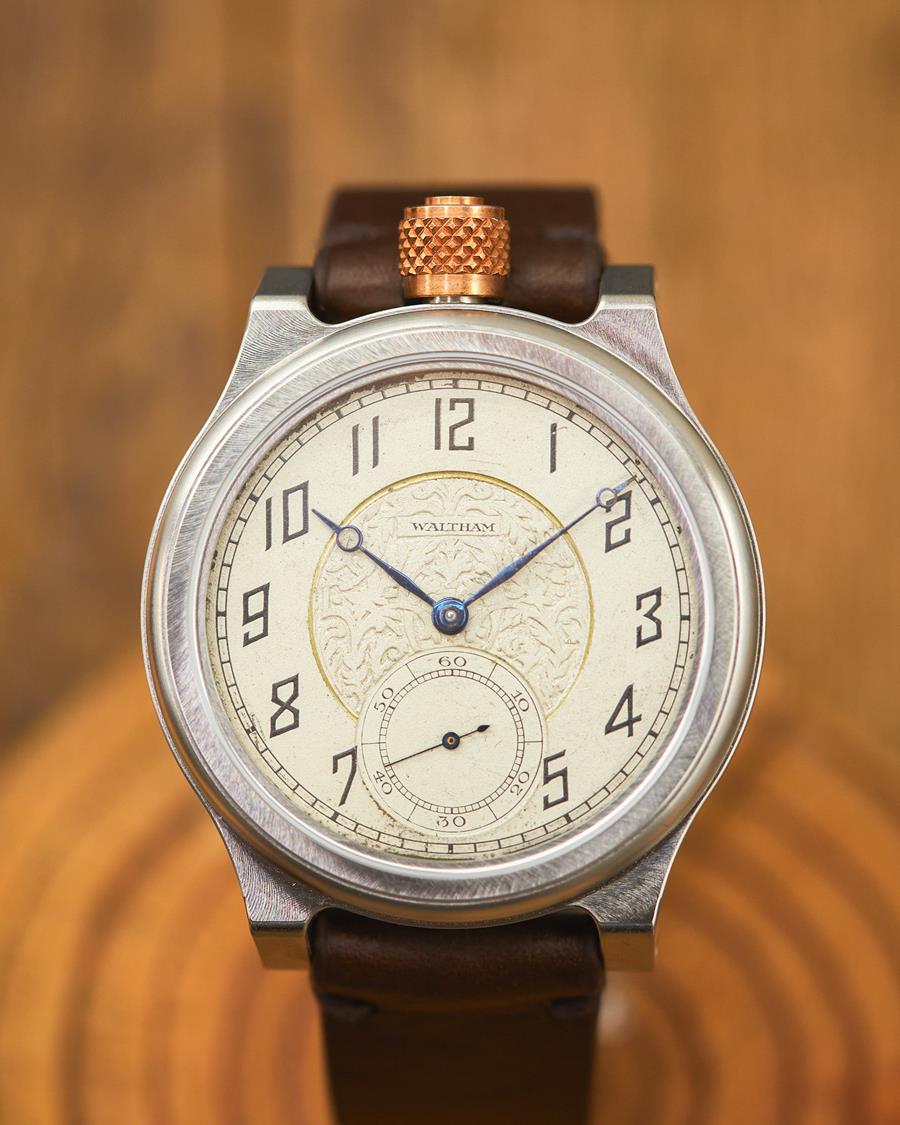 We’re thrilled to feature this magnificent watch initially produced by the American Waltham Watch Company in 1924 — the Boston 455. The watch boasts a stunning cream-colored dial with an elegant center design and thin, stylized black numerals. The dial also features stunning blued-steel full moon hands. We encased the original pocket watch within our scratch-resistant Machined Titanium case and equipped it with an eye-catching copper crown, making this piece even more unique and breathtaking.

On the back of the watch, you can view the piece’s intricate inner workings, including a 225-grade open-face movement, micrometer regulator, and Breguet hairspring. The watch also showcases a fashionable “Waltham” engraving that boasts to the piece’s historicity. Finally, the watch’s movement features luxurious and robust gold-plated gears powered by 17 screw-set jewels throughout its ¾ plate. We matched it with our Brown Stout leather watch strap, making this one-of-a-kind watch even more striking.

The American Waltham Watch Company originally manufactured the Boston 455’s pocket watch in Waltham, Massachusetts, in 1924 — the same year that Rhapsody in Blue premiered in New York City. The musical composition was an important landmark in the history of American music because it combined classical music with jazz influences. George Gershwin wrote the original composition while Paul Whiteman served as the bandleader in its inaugural performance. Rhapsody in Blue made its debut in a concert celebrating Abraham Lincoln’s birthday titled “An Experiment In Modern Music” in Aeolian Hall on February 12, 1924. 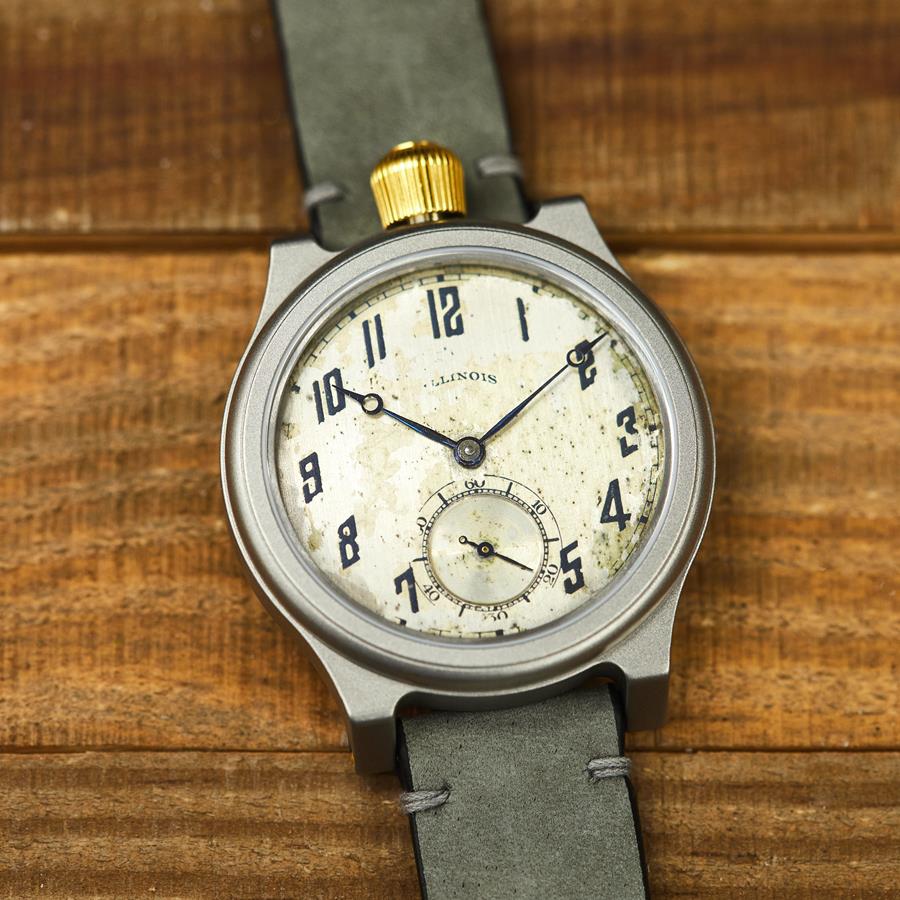 We are pleased to present to you this spectacular piece from the Illinois Watch Company, our Springfield 513. Each and every watch that we produce is one-of-a-kind and has its own unique story to tell from years of use and different watchmakers opening it up to service it. This watch grabbed our attention immediately when we saw this fantastic dial, with an incredible look from years of use. This watch will pull you in with its attention to detail, as you explore each different portion of the face and all of the finer details. We decided to use our soft-spoken sandblasted titanium case, to let the older portions of the watch stand out on their own. A gold crown and hardware pair well with the yellow tones on the dial, while these blued-steel full moon hands top it off.

As we turn this watch over to reveal the movement inside we are pulled in for a closer look by this incredible sunburst design that has been carefully machined into the build plate. Copper inlay as well as rose-gold plated gears jump out and bring attention to all of the incredible craftsmanship of this watch. 21 amazing jewels and brass hardware add to the sophisticated design that we have come to expect from the Santa Fe Special model.

This watch was originally produced by the Illinois Watch Company in 1922 in Springfield, Illinois. On April 13th of this same year, the state of Massachusetts voted to open up all public offices to both men and women. The very next year, Susan Fitzgerald and Sylvia Donaldson become the first women elected to the Massachusetts House of Representatives.