We are now LESS THAN two months out from the Military Edition launch!

Are you on the Military Edition Waiting List? We'll be releasing information about this year's limited edition watches THIS THURSDAY, and we don't want you to miss it!

The most important thing you need to know is that it'll be available at 12pm Mountain Time on November 11th (Veterans Day). Sign up for the waiting list so you don't miss it! 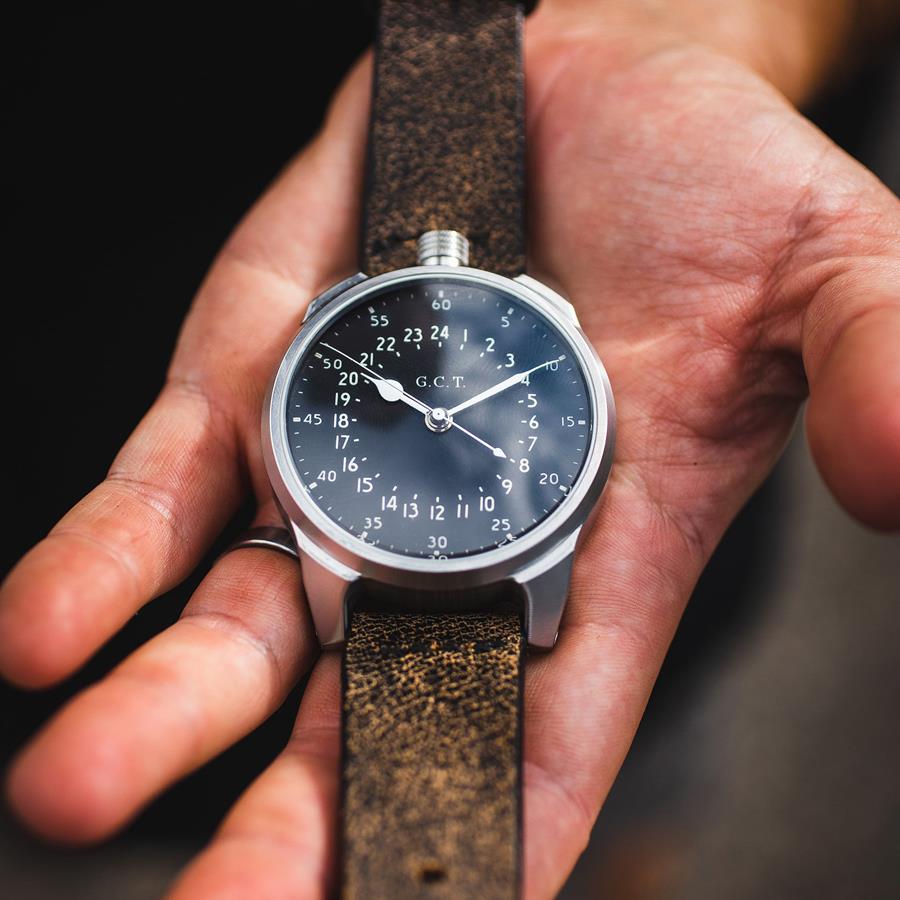 Consistency is Key: Using Email Marketing to Grow Our Brand

By automating the process, you can save yourself a huge amount of time while simultaneously reaching thousands of people with each email. What’s the secret to our email marketing strategy? Consistency.

When you sign up to the email list on Vortic Watch’s website, you begin an email journey that not only tells you our story and how we started the business, but you also receive these weekly roundup emails that show you that week’s featured watches. We’ve seen our email list grow exponentially since we started — watch this episode to learn about our process! 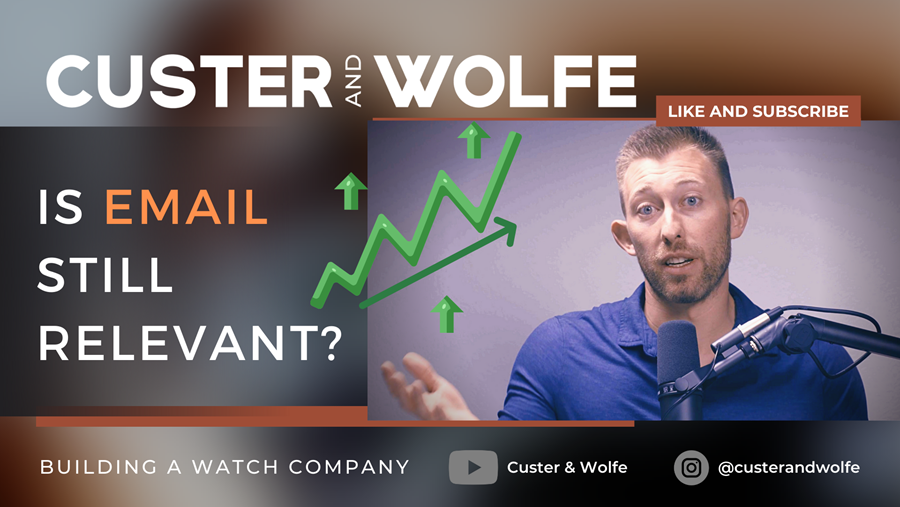 For those really following along, you might notice something different about the last few emails you received from us. We're staying consistent, but we're also always testing new things. Recently we've been testing if the time we send these on Tuesdays impacts the open rate, and in the last few emails, we've left-justified the text instead of sending it all centered (which we did for almost 3 years).

Answer this email or comment on this YouTube video: Are you a "left justified" person or a "centered" person?!

A reminder that we will be in Boulder this weekend for the Firefly Fall Market: 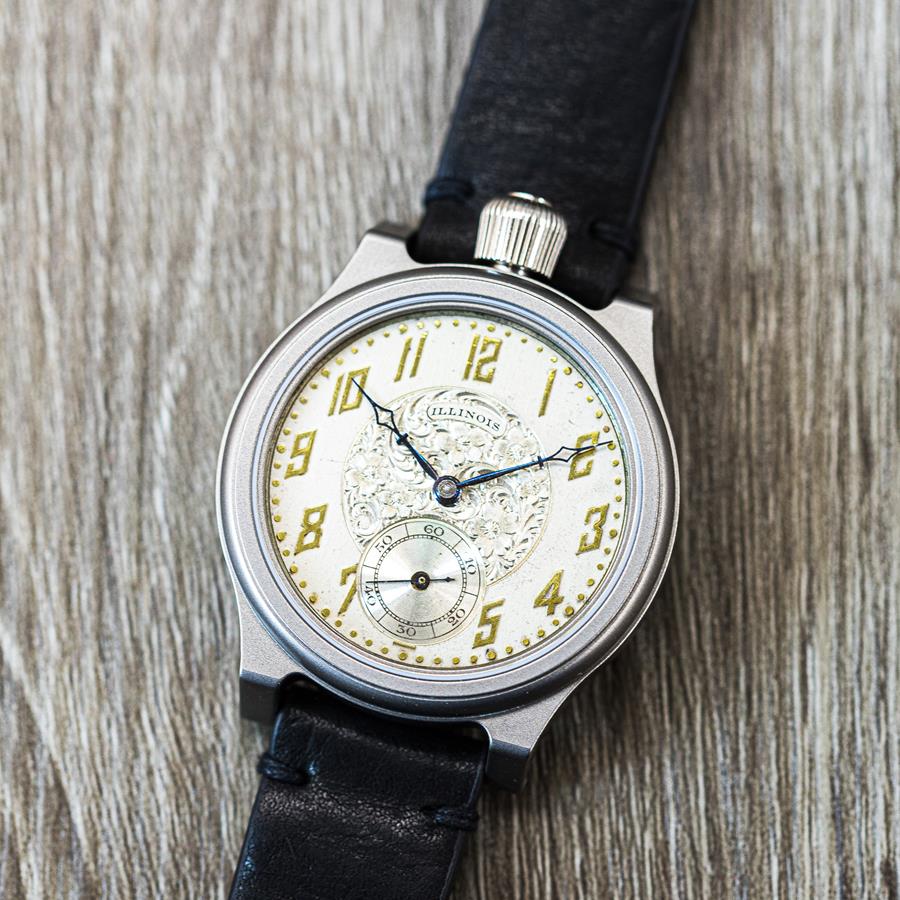 We’re pleased to showcase this sumptuous piece initially produced by the Illinois Watch Company nearly a century ago — the Springfield 534. The product’s antique pocket watch features a sophisticated center design pattern and patinated-gold-colored numerals that look breathtaking against its cream-colored background. The front of the watch also features a glimmering subdial and blued steel diamond kite watch hands. We encased this elegant pocket watch within our robust and stylish Sandblasted Titanium case and topped it off with a nickel-plated crown.

On the back of the watch, you can view its 405-grade open-face movement with a going barrel and center bridge plate. The rear side of the watch also displays strong and visually-pleasing bronze-plated gears powered by 17 jewels. Finally, we matched this remarkable watch with our Stout leather watch strap, adding even more style to the final product.

The Illinois Watch Company originally manufactured the Springfield 534’s pocket watch in Springfield, Illinois, in 1925 — the same year that Tom Lee famously rescued 32 passengers from a sinking sternwheel steamboat, M.E. Norman. The U.S. Army Corps of Engineers operated the M.E. Norman and launched the steamboat in 1924. Only a year later, the boat capsized in the Mississippi River for unknown reasons. Tom Lee, a riverworker, was returning to shore on a motorboat when he noticed the ill-fated steamboat sinking.

Although Lee couldn’t swim, he immediately began rescuing passengers from the steamboat by transporting them to shore on his motorboat. He worked tirelessly long through the night to rescue as many of the boat’s occupants as possible. Tragically, 23 crew members and passengers drowned, but far more lives would have been lost if Tom Lee hadn’t taken it upon himself to rescue as many people as possible.

Tom Lee passed away from cancer in 1952, and his memory is honored by Tom Lee Park in Memphis, Tennessee, which overlooks the Mississippi River. The park features a memorial plaque describing Lee’s heroic actions, and it features a bronze statue in his likeness. 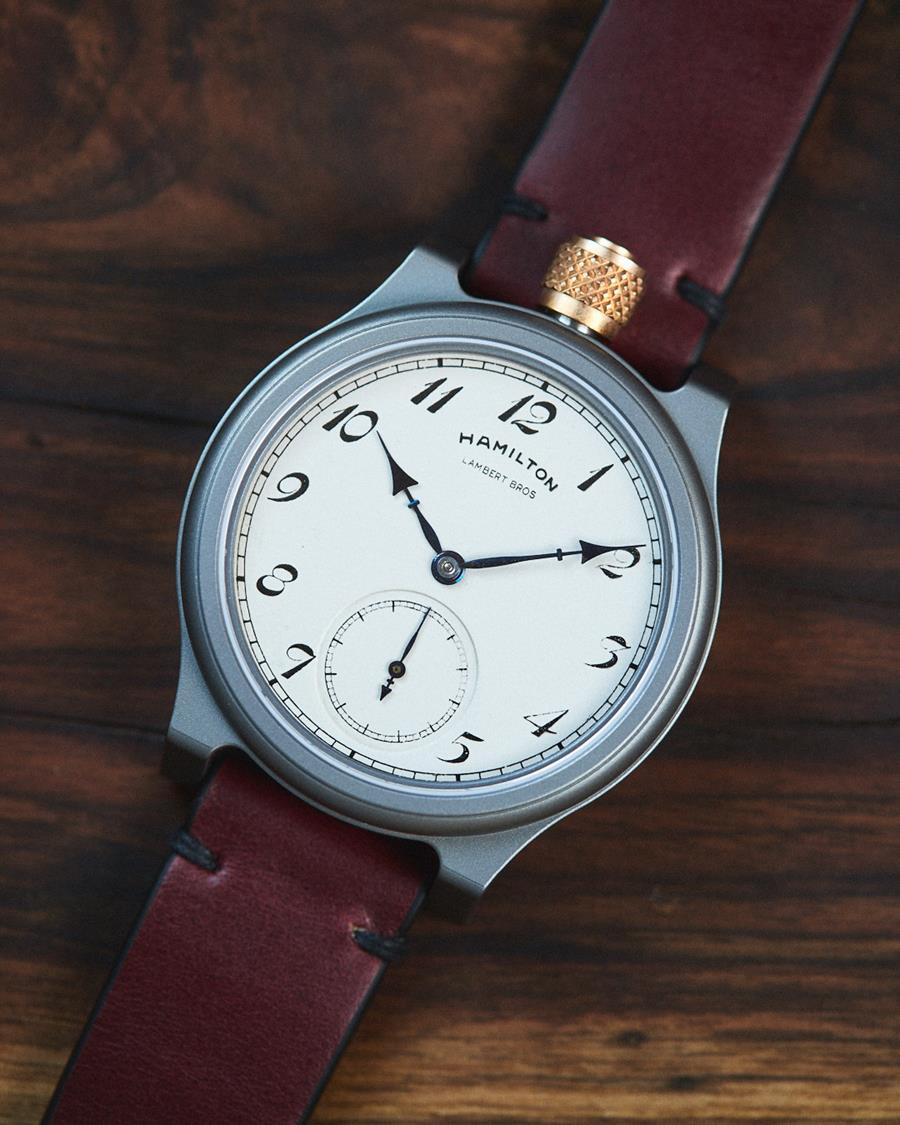 We’re excited to present to you this breathtakingly unique watch, originally produced by the Hamilton Watch Company in 1936 — the Lancaster 162. The Lancaster 162’s pocket watch movement features a cream-colored dial with stylized black numerals. The gorgeous front display also presents blued steel arrow hands and a subdial. We encased this magnificent pocket watch within our Blued Titanium case and added a gold-plated crown. Our contemporary additions to this antique piece make the final product even more stylish and unforgettable.

On the back, you can view the pocket watch’s original 912-grade open-face movement with a nickel finish, black inlay color, and pendant setting. You can also see its sumptuous gold-plated gears powered by 17 screw-set jewels throughout its ¾ plate. To finish the piece off, we equipped it with our hand-crafted Merlot leather watch strap and a solid bronze machined buckle.

The Hamilton Watch Company initially manufactured the Lancaster 162’s pocket watch in Lancaster, Pennsylvania, in 1936 — the first year that Billboard magazine released its first music hit parade list, today that list is known as the Billboard charts, such as the Billboard Hot 100 and Global 200.

Although people now know Billboard for its music lists and articles, the magazine actually started as a publication for those working in advertising and bill postings in 1894. The magazine was originally called Billboard Advertising. During the Great Depression, the jukebox industry grew, leading Billboard to advertise the machine and focus progressively more on the music industry. Through the 20th century, Billboard became more focused on music and eventually phased out its coverage of other topics.

See More Pictures Of This Watch Here
The Boston 468 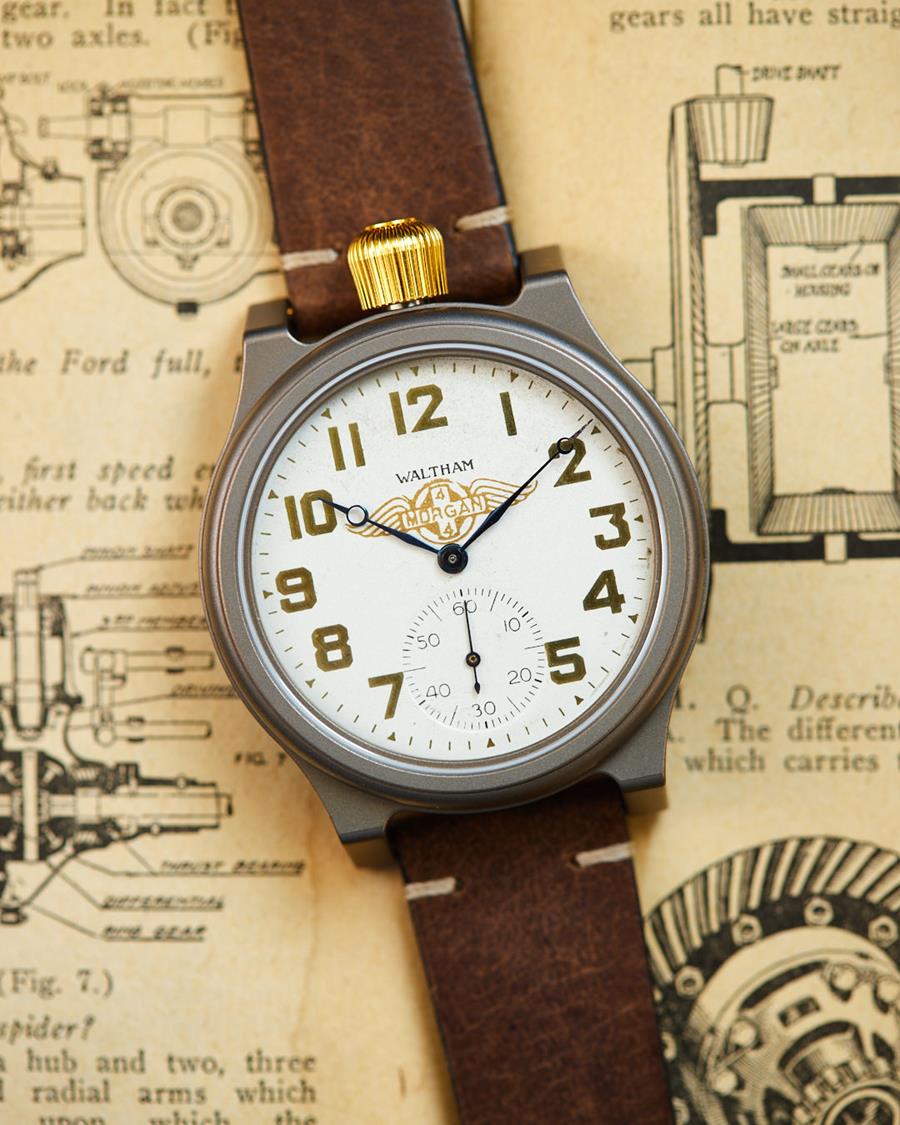 We’re delighted to feature this one-of-a-kind pocket watch originally produced by the American Waltham Watch Company — the Boston 468. One of the many reasons why this antique piece is incredibly interesting and unique is its Morgan Motor Company logo on the dial. The British car manufacturer began in 1909, and they constructed the longest-running production car architecture with the Morgan steel chassis produced from 1936 to 2020.

In addition to Morgan Motor’s classic logo, the front of the watch also features aged-gold-colored numerals and blued steel heavy moon watch hands. We paired this historic watch with our robust Bronzed Titanium case and topped it off with a gold-plated crown.

On the back of the watch, you can view the piece’s Royal-grade open-face movement with a patent regulator and Breguet hairspring. The watch’s rear also showcases stylish engravings reading “Royal” and “Waltham, Mass.” Finally, you can see the pocket watch’s bronze-plated gears powered by 17 jewels. We made this historic piece even more stunning and fashionable by equipping it with our artisan-designed Natural leather watch strap.

The American Waltham Watch Company originally manufactured this unique piece of American history in Waltham, Massachusetts, in 1918 — the same year President Woodrow Wilson delivered his Fourteen Points speech to Congress, where he outlined key principles for negotiating peace to end World War I.

President Wilson delivered his speech in January 1918, but the war raged on for several months until the Armistice of 11 November 1918. 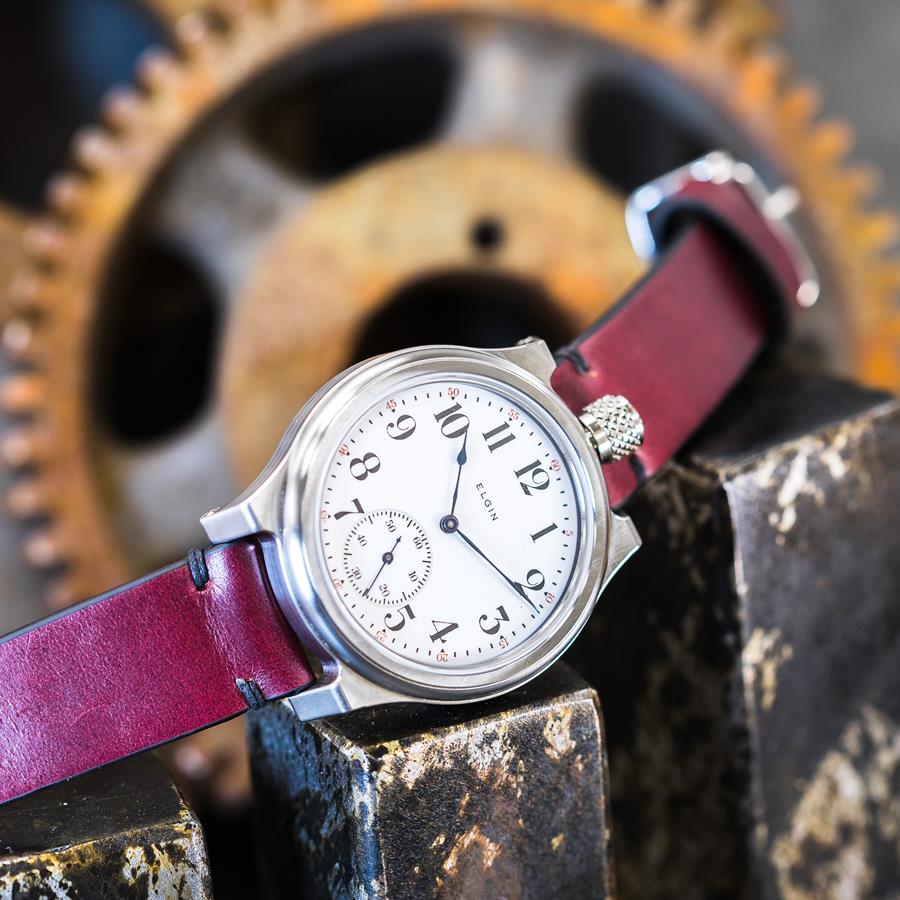 We’re happy to feature this highly sophisticated piece initially produced by the Elgin National Watch Company 116 years ago — the Chicago 496. This breathtaking pocket watch is a G.M. Wheeler variation, and it features a pristine white dial with black hour numerals and blood orange minute numerals. The front of this antique piece also displays blued steel spade and whip watch hands, and a convenient subdial. We paired this already-stunning pocket watch with our stylish Machined Titanium case and nickel-plated crown.

Our robust and scratch-resistant Machined Titanium case comes with a transparent back, enabling watch enthusiasts to view its historic 347-grade open-face movement with a “G.M. Wheeler” engraving that boasts a gilt inlay color and serif signing style. The back of the watch also features luxurious gold-plated gears powered by 17 sumptuous jewels. To top the watch off, we paired it with our comfortable merlot leather watch strap, making the final piece even more eye-catching.

The Elgin National Watch Company originally manufactured this stunning watch in Elgin, Illinois, in 1906 — the same year that the Norwegian Nobel Committee awarded President Theodore Roosevelt with the Nobel Peace Prize for his role in bringing peace between the Russian and Japanese Empires. He was the first U.S. president to receive the honor.

In 1904, the Russo-Japanese War began when Russia expanded into Manchuria, potentially disrupting Japan’s plans to expand its influence over Korea and Manchuria. The war began with the Battle of Port Arthur in February 1904 and raged on until the Treaty of Portsmouth concluded the conflict on September 5, 1905. President Roosevelt played a key role in brokering peace between the two nations. 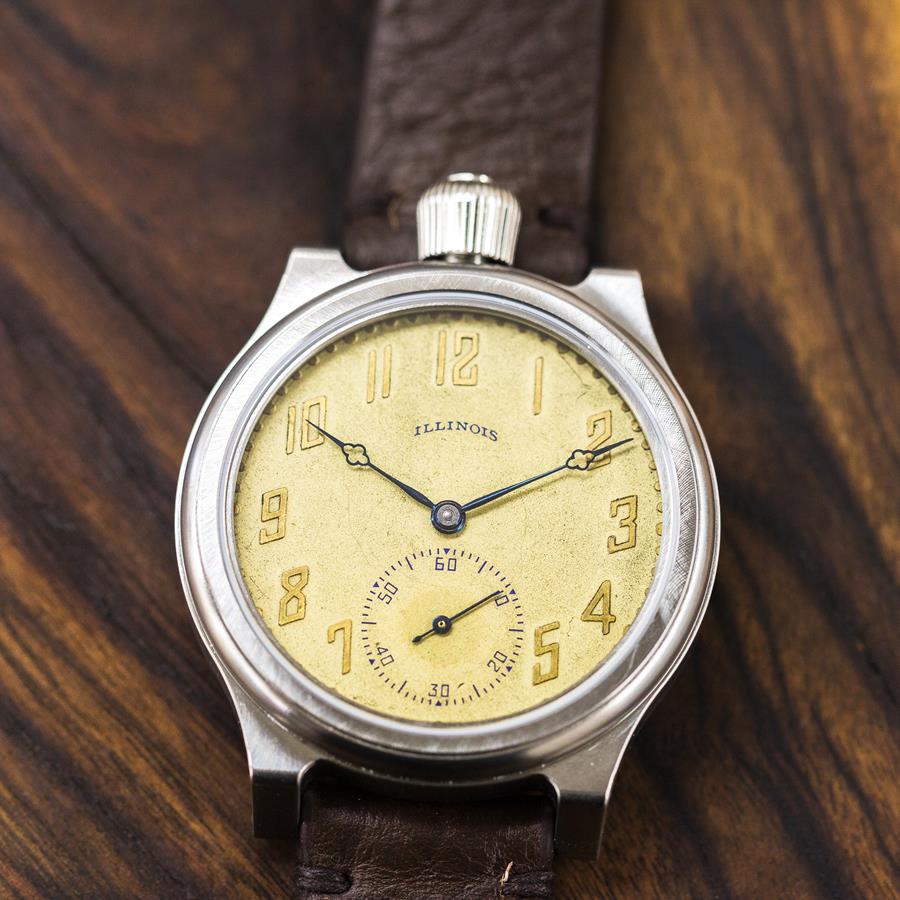 We’re thrilled to showcase this classic, sumptuous piece originally manufactured by the Illinois Watch Company — the Springfield 533. The antique pocket watch’s dial boasts a stunning light-gold-colored background along with stylish numerals that feature a darker golden shade. The face also features a blue subdial and blued-steel gothic watch hands. We complemented the dial’s luxurious-looking colors by encasing it within our stunning Machined Titanium case, and we topped it off with a nickel-plated crown.

Our Machined Titanium case features an open back, enabling you to view its Autocrat-grade open-face movement with a fitting bronze-colored engraving that reads “The Autocrat.” The piece also displays matching bronze-plated gears powered by 17 jewels throughout its center bridge plate. Finally, we paired this remarkable watch with our hand-crafted Stout leather watch strap.

The program was renamed the Grand Ole Opry in 1927, but the new name started as somewhat of a joke. On December 27 of that year, NBC’s Music Appreciation Hour, which featured classical and grand opera music, preceded WSM Barn Dance. To introduce Barn Dance, George D. Hay said, “For the past hour, we have been listening to music largely from Grand Opera, but from now on, we will present ‘The Grand Ole Opry’,” marking the beginning of the name change. 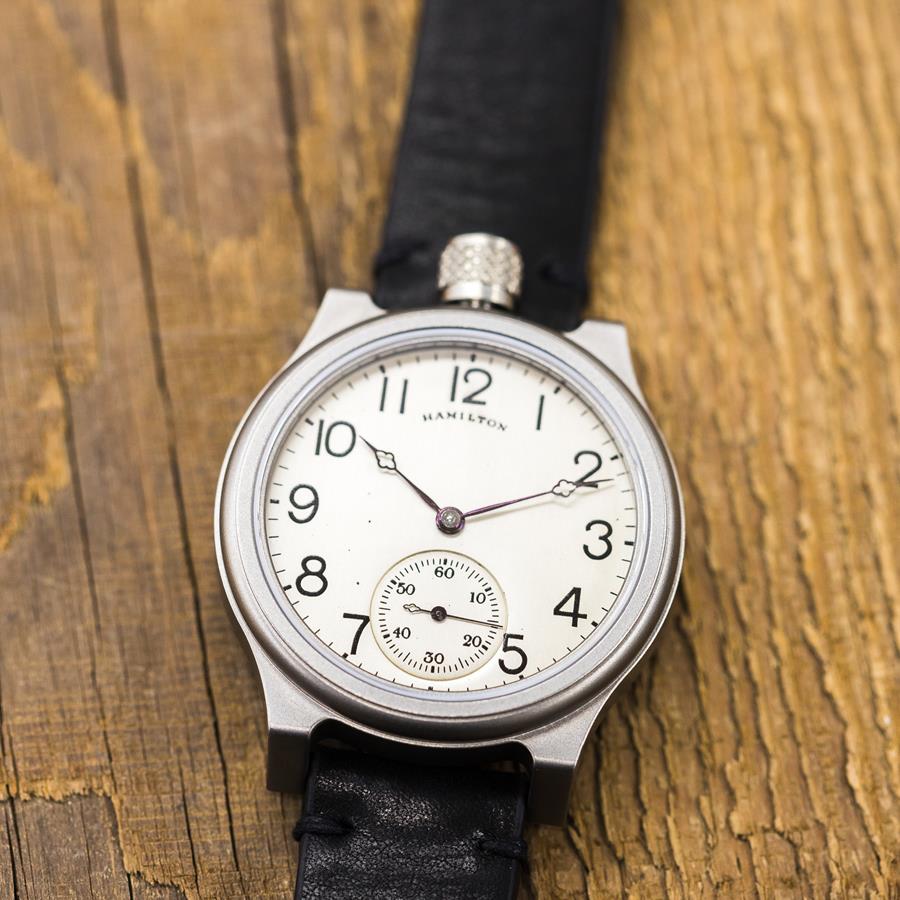 We’re thrilled to show you this splendid watch that was initially produced by the Hamilton Watch Company in 1928 — the Lancaster 160. The piece’s antique pocket watch features a stunning cream-colored dial with homely black numerals and a matching subdial. As you can see, the front of the watch also boasts exquisite violet gothic hands. We paired this historic pocket watch with our robust and scratch-resistant Sandblasted Titanium case and equipped it with a glimmering nickel-plated crown.

On the back of the watch, you can behold the piece’s 912-grade open-face movement with a reed regulator and black inlay color. The watch’s rear also boasts additional breathtaking qualities, such as its gold-plated gears and 17 screw-set jewels. Finally, we complemented this eye-catching and stylish watch with our comfortable Black leather watch strap. The dark strap handsomely juxtaposes the piece’s bright, attractive dial and case.

The Hamilton Watch Company originally manufactured this enviable watch in 1928 — the same year American anthropologist Margaret Mead authored the groundbreaking book Coming of Age in Samoa, which primarily focuses on the development of adolescent girls in the Samoan Island Taʻū.

Although the book generated controversy through the years and has been criticized for not meeting contemporary anthropological standards, it’s considered a landmark anthropologic text because Mead spent a great deal of time in the field researching her subject matter — which was not common at the time. At age 23, Mead spent nine months in Taʻū and interviewed and observed 68 girls between the ages of 9 and 20 to formulate her theories.