Tour Our Current Building With Tyler!

Episode #2 of Custer & Wolfe is LIVE!

Custer & Wolfe, Building A Watch Company Episode 2 is all about our current workshop on Link Lane in Fort Collins, Colorado. We'd like to show you what we have now before we share more about the new building and our big plans for it. We've come a long way in the past couple of years, and we built it all in that building. 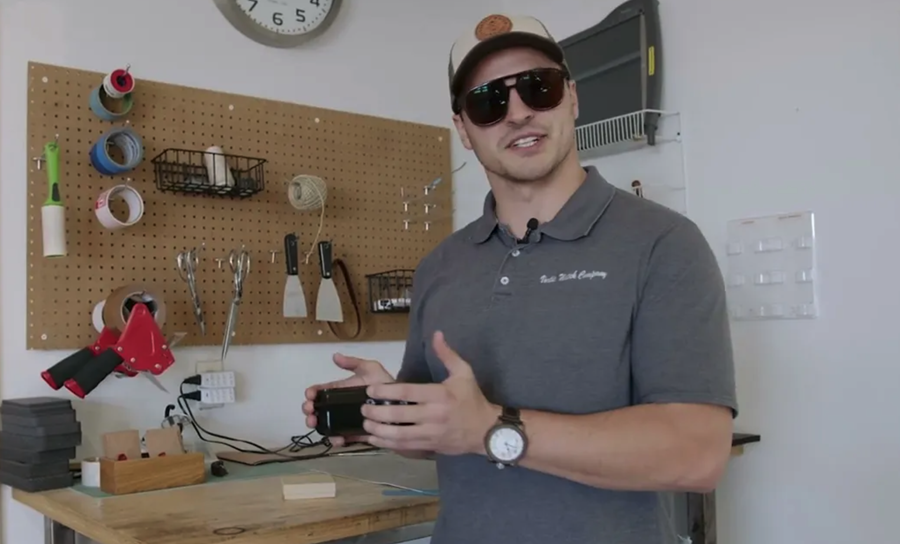 Leave us a comment on YouTube or reply to this email and let us know what else you want to see or learn. We can't wait to share!

Also, we're getting a lot of questions about Tyler's new hat, so over the next few weeks, we're rolling out a couple of new options.  We've been told there's a hat in the below photo. Some can see it, and some can't. 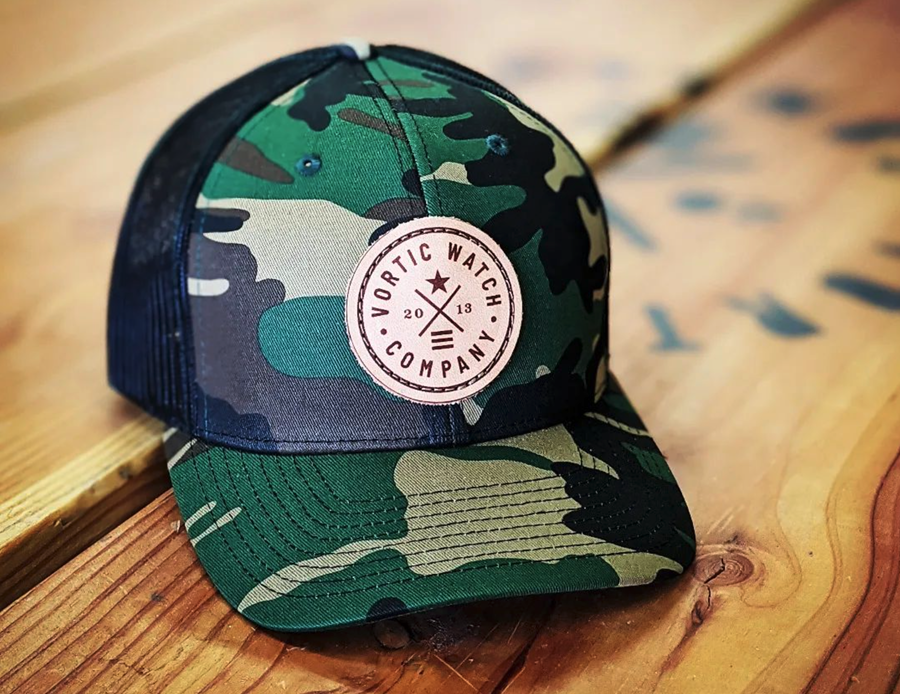 We're up to SIX watches per week now! AND most of these last few are still for sale. We finally have inventory! How cool is that?! 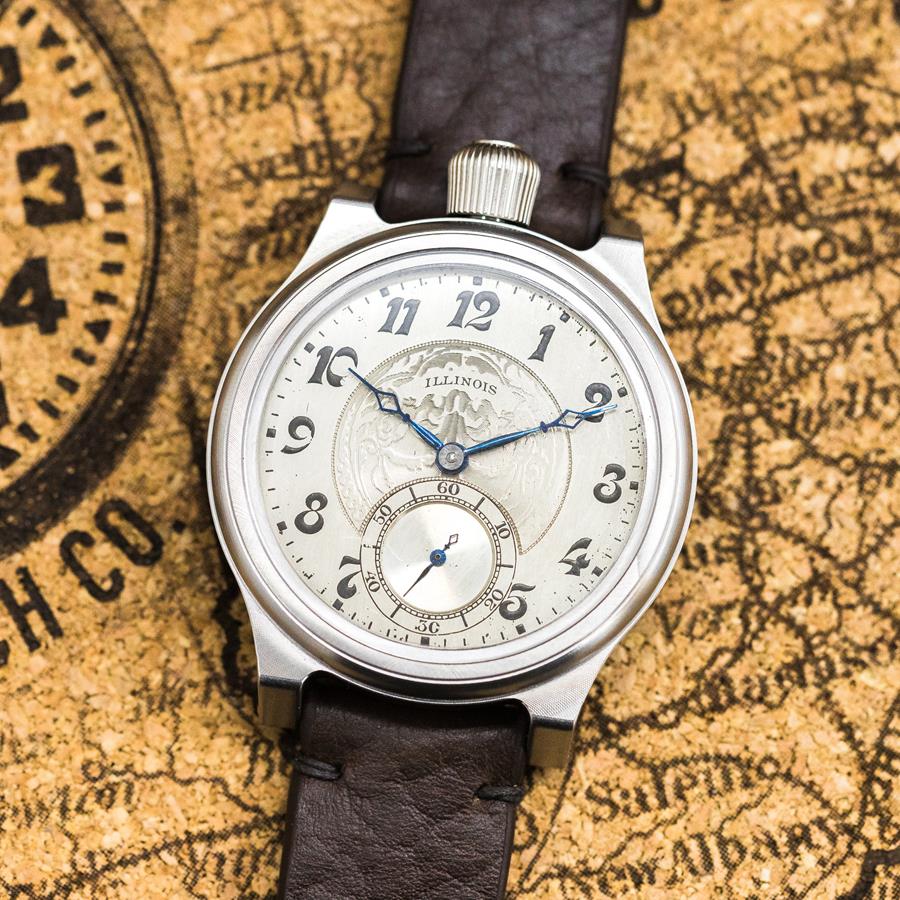 The back of the watch displays 405-grade open-face movement with a center bridge, nickel finish, and pendant setting. The watch also features three adjustable positions. The open-back Machined Titanium case also reveals the watch’s robust bronze-plated gears powered by 17 jewels. Finally, we matched the watch with our artisan-crafted Stout leather strap that goes perfectly with the dial’s numerals.

The Illinois Watch Company manufactured the pocket watch in Springfield, Illinois, in 1920 — the same year that Congress ratified the 19th Amendment, granting women the right to vote. Many women had voting rights in pre-revolutionary colonies in the 18th century, but every state, aside from New Jersey, created constitutions that stripped voting rights from women after the United States became independent. New Jersey was the final state to deny women the right to vote after they rescinded female voting rights in 1807. Some states and territories began granting women the right to vote in the late 19th century, but Congress continuously denied national women’s suffrage until they finally passed the 19th Amendment in 1919, which America then adopted in 1920. 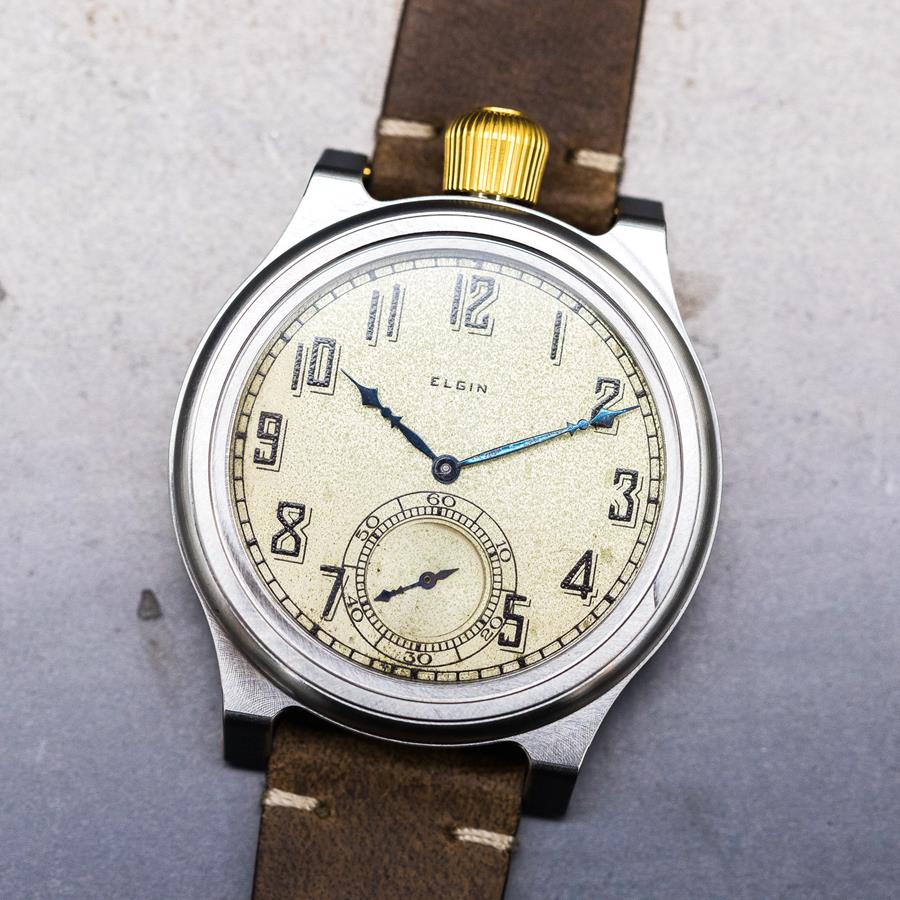 We’re excited to showcase this breathtaking piece originally manufactured by the Elgin National Watch Company in 1906 — the Chicago 458. The watch’s dial sports a beautiful light cream-colored background along with navy-blue minute and hour hands. The piece’s dark brown numerals feature outlines of a 45-degree angle text-shadow that complements the early 20th-century font style. We paired Elgin’s pocket watch with our pristine, scratch-resistant Machined Titanium case, which emphasizes the dial’s cream background, and we also equipped the pocket watch with a gorgeous gold-plated crown.

The Machined Titanium case also allows you a clear view into the watch’s inner workings, where you can see its 347-grade open-face movement with a nickel finish and pendant setting. The movement also boasts serif-styled engravings with gilt coloring, including an authentic “G.M. Wheeler” engraving. The piece sports 17 jewels and gold-plated gears that match the gilt engravings. We tied the piece together with a Natural leather watch strap and gold-plated buckle that further emphasize the watch’s antique qualities. 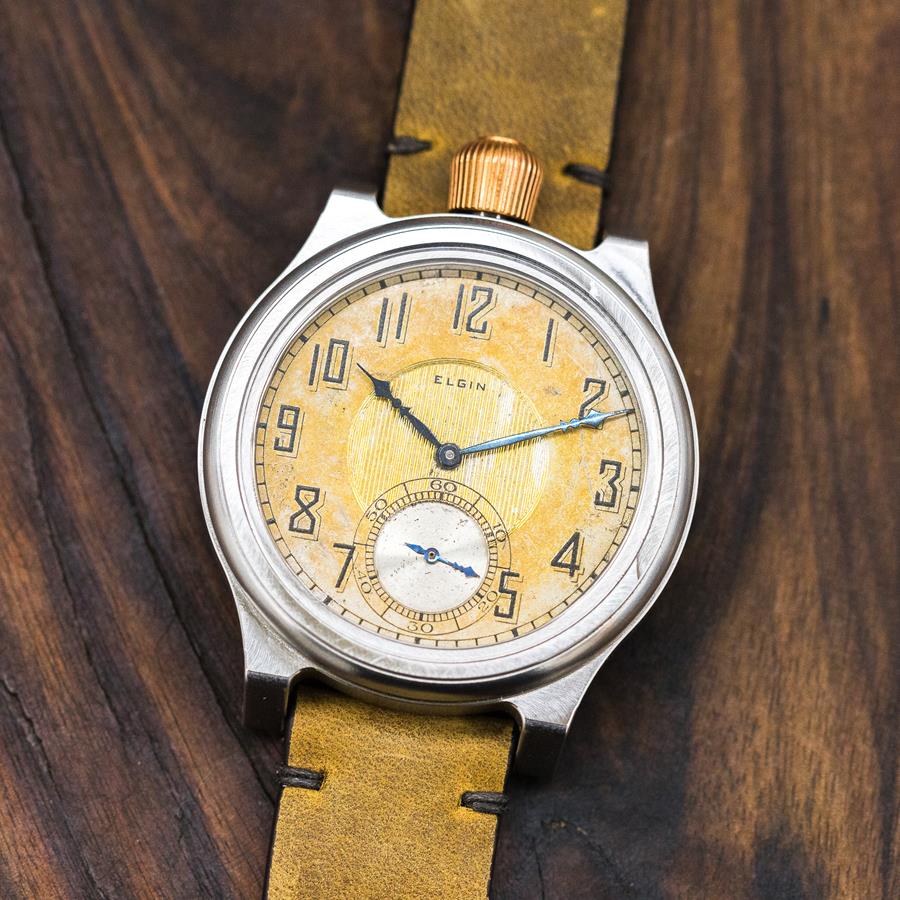 We're excited to unveil this breathtaking, one-of-a-kind piece initially constructed by the Elgin National Watch Company in 1927 — the Chicago 463. The watch's dial boasts a memorable and antique-looking light-brown hue atop its tan background. The piece also sports distinct, dark minute and hour hands that pair perfectly with its stylized numerals. The notable numerals showcase outlines of a 45-degree text-shadow, conveying a unique early 20th-century style. We paired Elgin's original pocket watch with our scratch-resistant Machined Titanium case and bronze-plated crown.

Our glimmering case highlights the dial's distinct colors, while its clear back showcases 477-grade open-face movement. With three different adjustable positions, the nickel and pendant movement has 17 ruby and sapphire jewels atop its ¾ plate. The watch's open back also lets you view its luxurious and powerful gold-plated gears. Finally, we equipped the watch with our artisan-crafted Natural leather watch strap, which further emphasizes the piece's antique qualities.

The Elgin National Watch Company created the pocket watch powering the Chicago 463 in Elgin, Illinois, in 1927 —  the same year that the United States and Canada opened the international Peace Bridge between Fort Erie, Ontario, and Buffalo, New York. The bridge was originally named to commemorate 100 years of peace with our northern neighbors. The Buffalo and Fort Erie Public Bridge Authority maintain it, and the bridge spans a total of 5,800 feet over the Niagara River. The bridge is invaluable for importing and exporting freight between the United States and Canada, with over one million trucks utilizing the bridge every year. 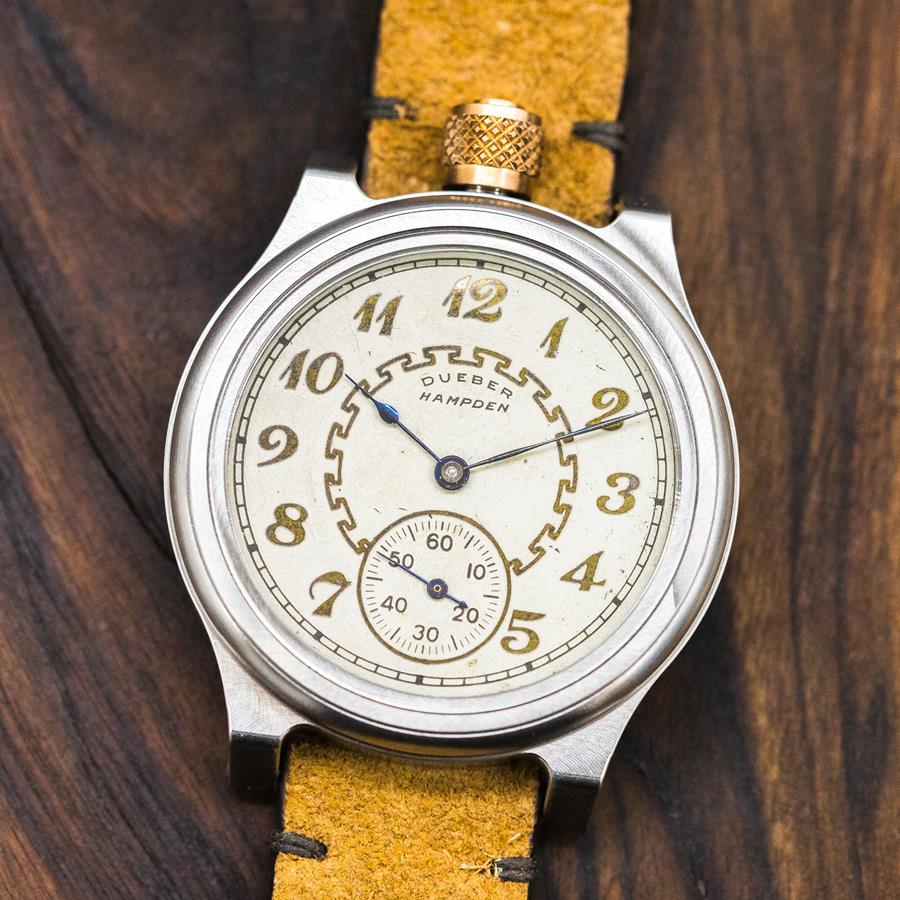 We’re excited to showcase this stunning watch originally created by the Hampden Watch Company in 1918 — the Canton 004. The Canton 004’s gorgeous dial features a tan background and brown, rustic numerals. In addition, the dial boasts a beautiful and intricate center pattern along with the words “Dueber Hampden.” We encased Hampden’s original pocket watch with our scratch-resistant Machined Titanium case and a copper crown. The crown pairs perfectly with the piece’s numerals, while the Machined Titanium emphasizes the dial’s background.

The back of the watch features 307-grade open-face movement with nickel and a stripe-patterned finish. The ¾ plate boasts 17 jewels, and breathtaking gold-plated gears power the watch. The movement also features distinct engravings that convey its authenticity, including “safety pinion,” “Canton, O No. 307.,” and more. We matched the watch with our comfortable and attractive Mojave leather watch strap that complements the dial’s numerals.

The Hampden Watch Company created the Canton 004’s pocket watch in Canton, Ohio, in 1918 — the same year that WWI concluded. The Great War initially began in 1914 and claimed around 40 million lives in only four years, including 117,000 American soldiers. The United States officially entered the war in 1917 after the German Foreign Secretary Arthur Zimmermann promised Mexican President Carranza to support Mexico in a war against the United States, which Mexico declined. With America’s strong military support, the Allies ultimately prevailed. The Allies and Germany signed an armistice agreement on November 11, 1918. 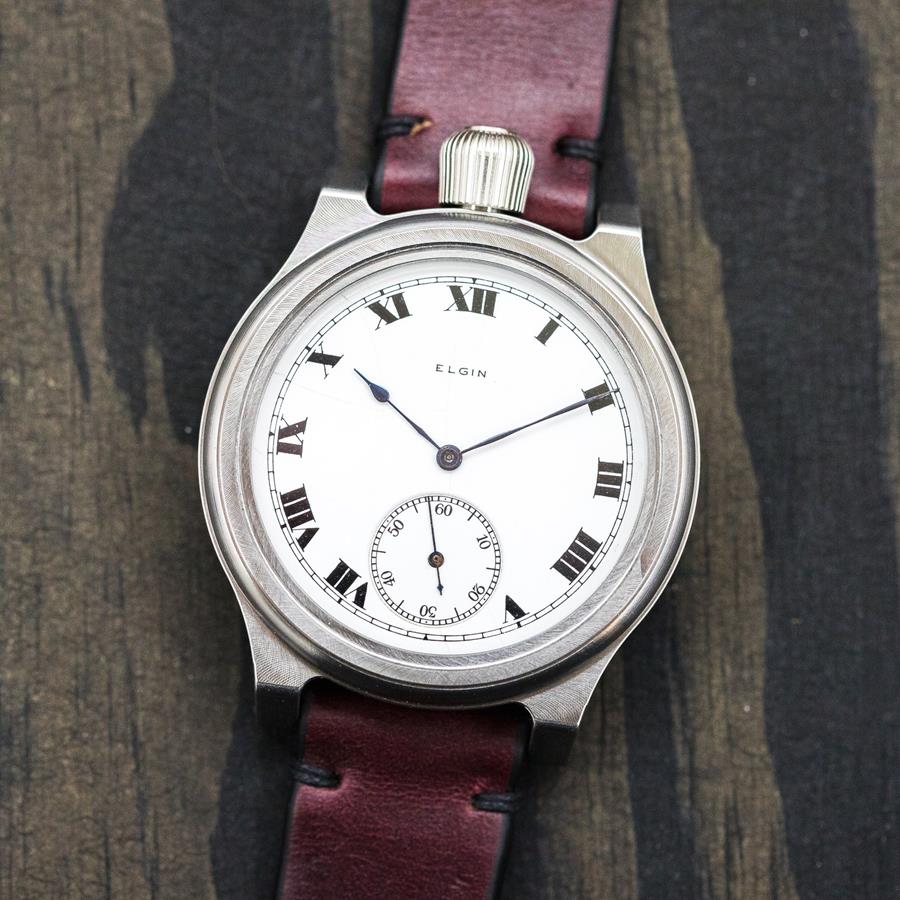 Wwe’re pleased to showcase this stunning watch initially created by the Elgin National Watch Company in 1923 — the Chicago 459. The original dial features a spotless white background with Roman numeral hour indicators. Its blue minute and hour hands shine distinctly from the dial’s pristine background and dark numerals. We matched the pocket watch’s elegant style with our Machined Titanium case, and we topped off the piece’s sophisticated design with a nickel-plated crown.

Our case’s open back reveals robust and intricate gold-plated gears within its 345-grade open-face movement. You can view the watch’s gorgeous 17 ruby and sapphire jewels atop its ¾ plate. Finally, we matched the watch design with our one-of-a-kind Merlot leather watch strap and Machined Titanium buckle, further emphasizing the piece’s refined style. 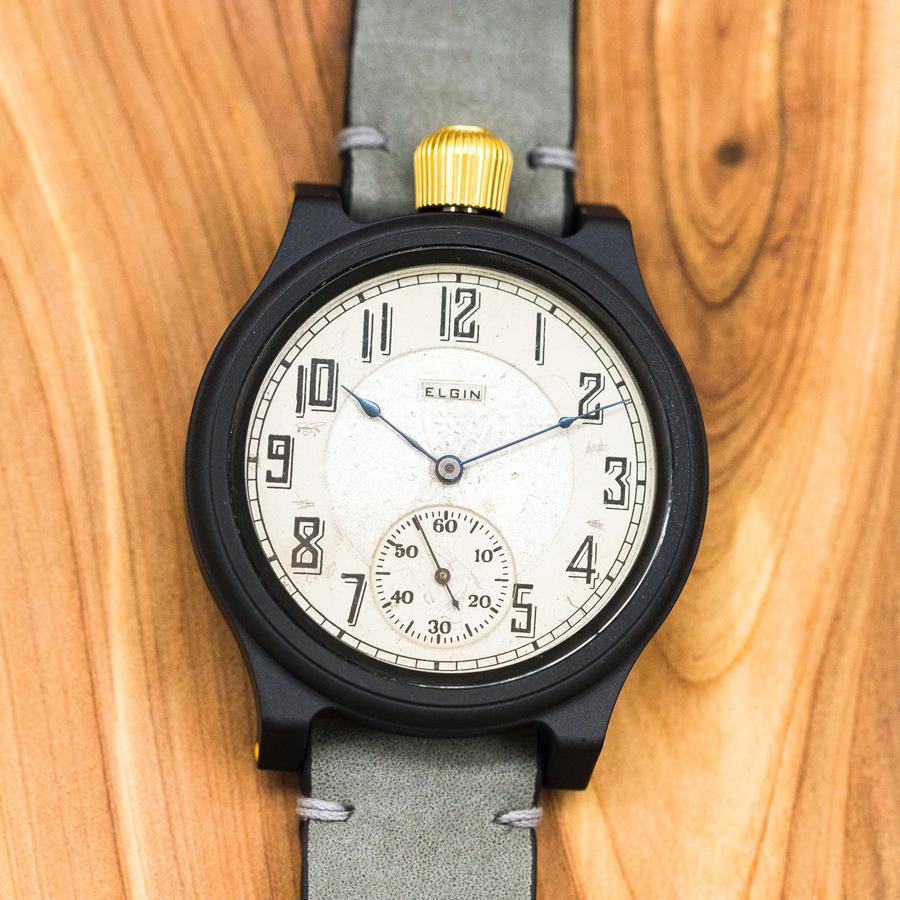 We present you this stunning piece initially constructed by the Elgin National Watch Company in 1924 — the Chicago 457. We crafted Elgin's original pocket watch into this stunning one-of-a-kind wristwatch. The watch's dial features a sophisticated cream-colored background that emphasizes its dark, stylized numerals. The numerals feature a distinct 45-degree-angle text-shadow conveying its early 20th-century style. The piece's hands feature a subtle dark blue hue that complements the dial's background.

We equipped the piece with our Black DLC case, contrasting the dial's light background while matching its dark numerals, and we added a gold-plated crown that shines brightly in juxtaposition with the dial. Our black DLC case features a clear back, giving you a perfect view of the watch's 345-grade open-face movement with a nickel finish and pendant setting. Peering through the back, you can also see the piece's breathtaking gold-plated gears and 17 ruby and sapphire jewels. We paired the watch with our artisan-designed, stone leather watch strap, adding a rugged quality that ties the piece together perfectly.

The Elgin National Watch Company initially created the pocket watch in Elgin, Illinois, in 1924 — the same year in which Congress passed the Indian Citizenship Act. The act was signed into law by the 30th president of the United States, Calvin Coolidge, and granted citizenship to Native Americans born in the United States. House Representative Homer P. Snyder, who was known for advocating for Native American rights, introduced the act to Congress. Snyder also served as the chair of the United States House Committee on Indian Affairs from 1921 to 1925. Although Congress granted Native Americans citizenship on June 2, 1924, many states unjustly denied their right to vote until Congress passed the Civil Rights Act of 1957.