What Is A CNC Machine And How Do You Use It To Make Watches?

What makes a mill a mill? Have you ever been curious about how we machine the cases for our watches? In this episode, Tyler talks us through our various mills (three, four and five axis mills), how they work, and what we make with them. He even shares the differences between our original Haas machines and the awesome new DMG machines. You asked for more technical information, so you can expect an episode a month with Tyler. 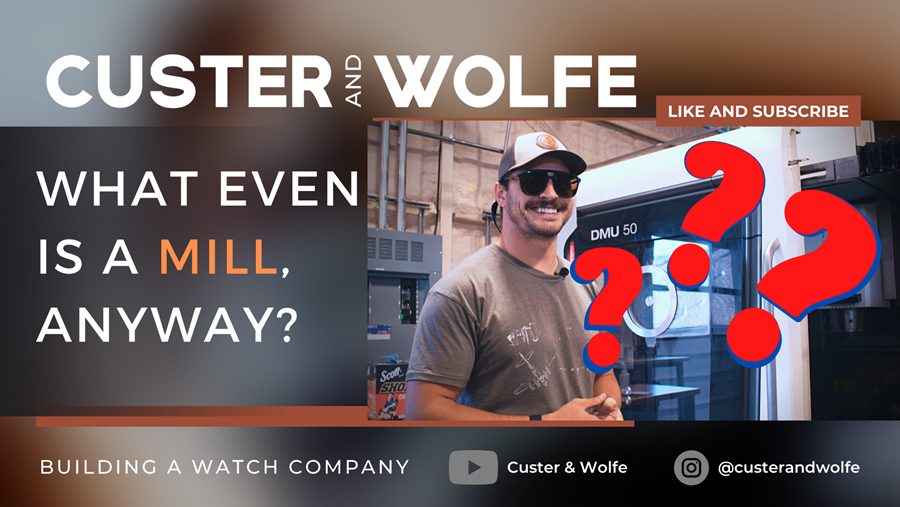 Should we get even more detailed? What other questions about our process do you have?

Let us know what else you want to see in the comments on YouTube or by replying to this email! 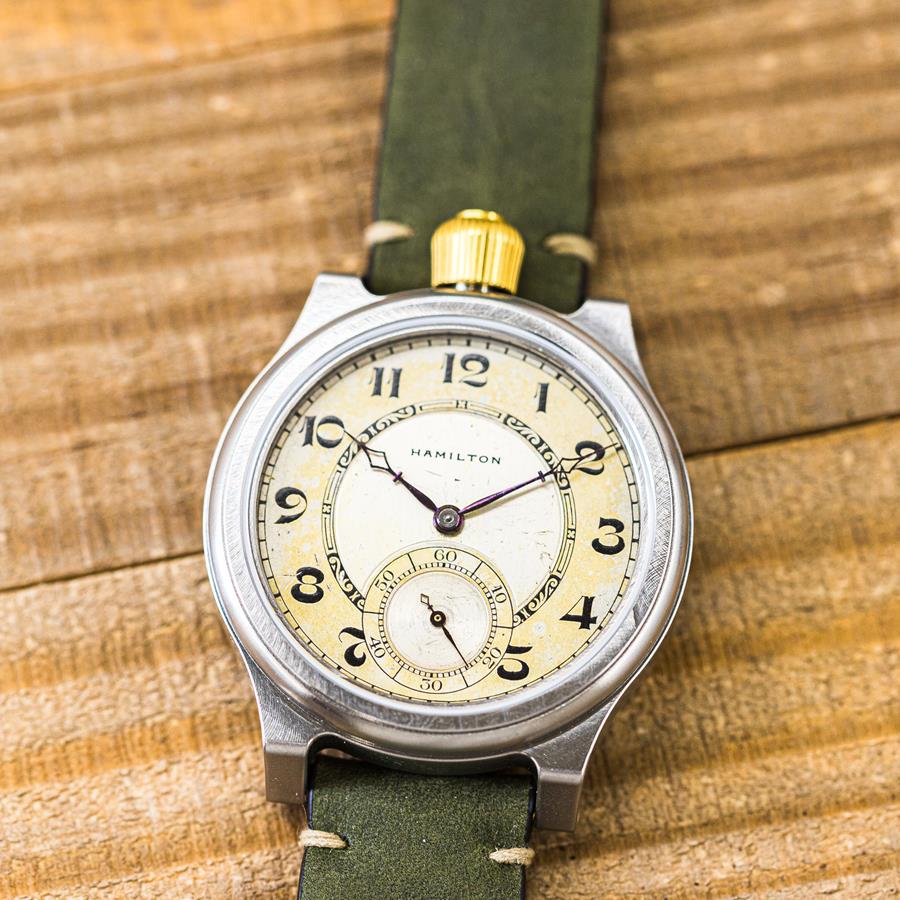 We are thrilled to bring you another stunning timepiece initially created in 1930 by the Hamilton Watch Co. in Lancaster, PA — the Lancaster 156. This historical watch features a patinated cream-colored face accompanied by stylized black Monrocq Freres numerals. The purple-tinted diamond kite-shaped hands also add to the watch’s gorgeous antique display.  We encased this movement in our machined titanium case and topped it off with a gold-plated crown to further highlight the hues of the face.

As you turn the watch over, you can view the glimmering machined nickel ¾ plate and matching outer gears through our unique clear-backed case. This magnificent 912-grade movement also showcases 17 gleaming screw-set jewels and stunning gilded inner gears. Additionally, this watch features a double roller and reed regulator. To complement this watch’s gorgeous antique movement and machined titanium finish, we added our comfortable olive strap.

In January of 1930, the same year that the Hamilton Watch Co. produced this stunning timepiece, Bonnie Parker and Clyde Barrow met for the first time at Clarence Clay’s house. The crime spree of this infamous duo lasted for four years and led to one of the most iconic manhunts in American history. Bonnie and Clyde’s rap sheet included multiple prison breaks, robberies, and murders across Texas and Louisiana.

Their wild ride ended abruptly in 1934 as Texas Rangers and Louisiana State Police ambushed them along a highway in Sailes, Louisiana. The posse opened fire on Bonnie and Clyde as they approached in an automobile — killing them instantly. 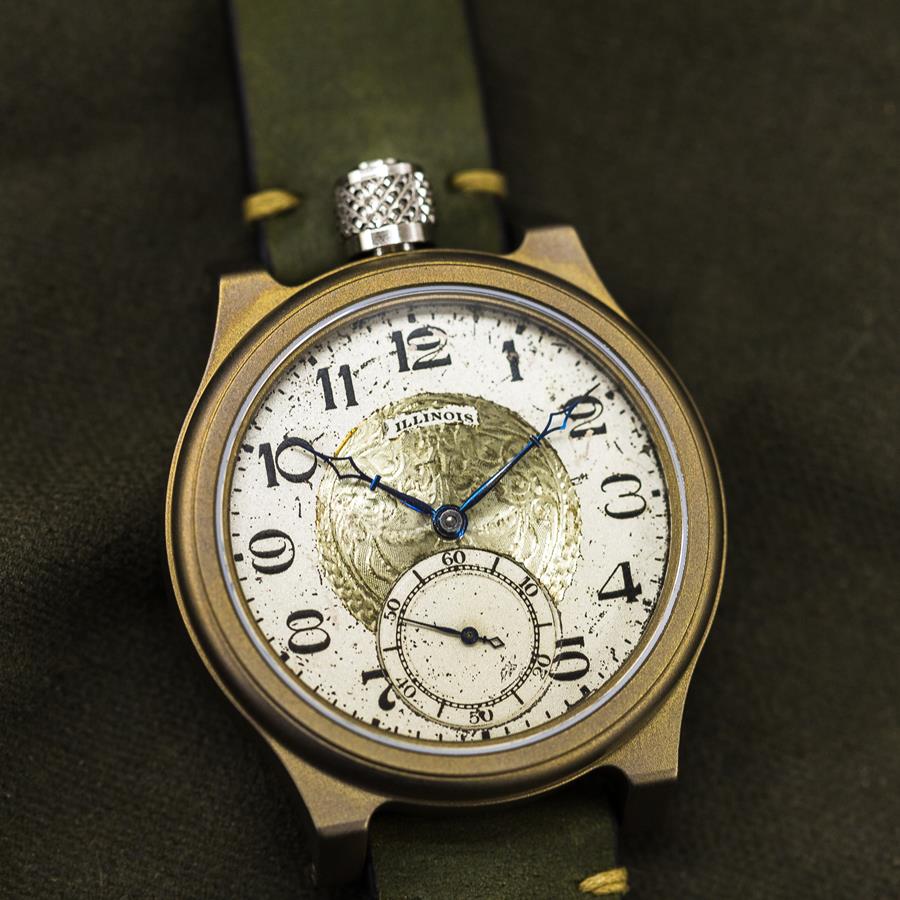 We’re delighted to present to you this unforgettable antique piece initially produced by the Illinois Watch Company nearly a century ago — the Springfield 529. This one-of-a-kind watch features a dial with a white background and stylish black markings that match its numerals. Additionally, the front of the piece has a uniquely textured cream-colored center as well as blue-tinted diamond kite hands and matching subdial. We made the original pocket watch even more stunning by adding our own craftsmanship to the final product — our Bronzed Titanium case and nickel-plated crown. The gorgeous case and crown make the front of this already breathtaking watch even more eye-catching.

Our Bronzed Titanium case features a transparent back, enabling viewers to see the antique pocket watch’s original Autocrat-grade open-face movement with a stylish and fitting engraving that reads “The Autocrat.” You can also view the watch’s intricate bronze-plated gears powered by 17 jewels. To top off this 100% American-made watch, we added our comfortable, handcrafted Olive leather watch strap.

Interestingly, before it became a national monument, the Lava Beds served as the location for the Modoc War. The conflict between the United States and the Modoc people ran from July 6, 1872 to June 4, 1873. It started when Modoc Chief Kintpuash, 52 warriors, and 150 other members of the Modoc people exited the Klamath Reservation. They occupied the Lava Beds and held off the United States Army until April 1873, when the US Army and Modocs met for a peace commission. Unfortunately, Kintpuash and other Modoc warriors killed General Edward Canby and Reverend Eleazar Thomas during the meeting, and the Army captured the Modoc people a few months after. Chief Kintpuash and three others were executed and the rest of the Modocs were held as prisoners of war until 1909.

See More Pictures Of This Watch Here
The Boston 466 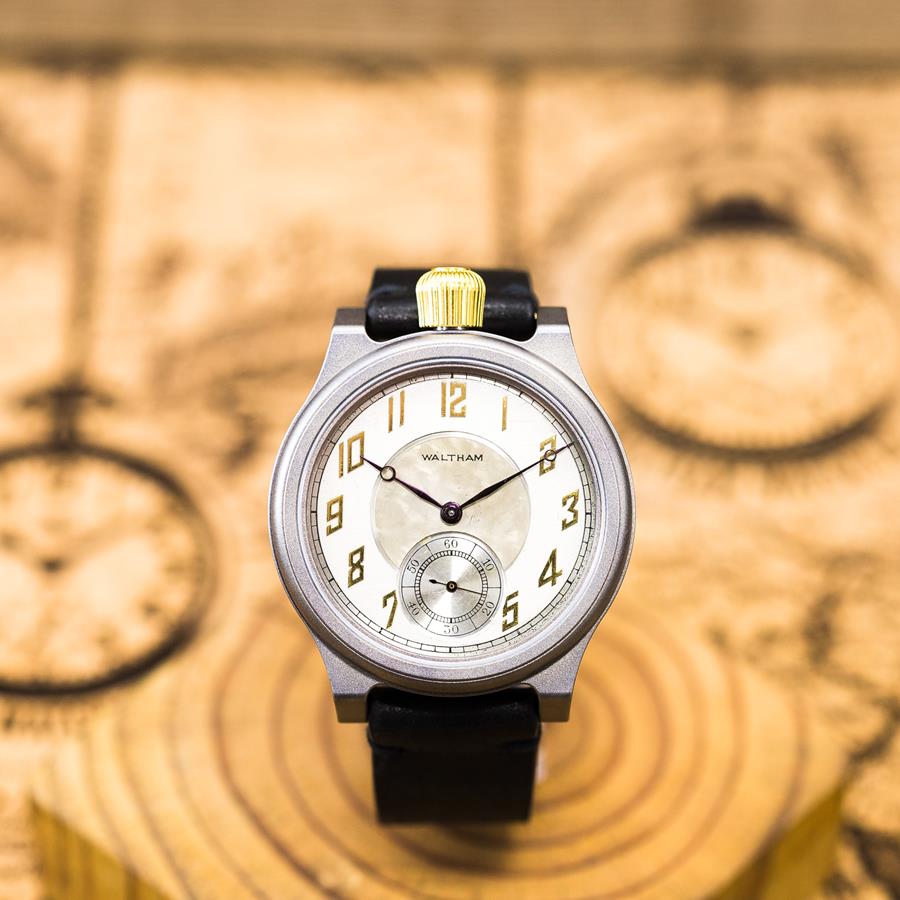 We’re thrilled to share this remarkable piece of history originally manufactured by the American Waltham Watch Company in 1925 — the Boston 466. The Boston 466’s antique pocket watch boasts an immaculate dial with a cream-colored background and a gray center. The front of the piece also showcases sumptuous, gold-colored numerals along with violet heavy moon watch hands. We complemented the pocket watch’s beautiful dial with our robust Sandblasted Titanium case and equipped it with a gold-plated crown, matching the dial’s numerals.

On the back of this stunning piece, you can view the original pocket watch’s 225-grade open-face movement with a micrometer regulator and breguet hairspring. You can also see its breathtaking gold-plated gears powered by 17 screw-set jewels throughout its ¾ plate. Finally, we paired this one-of-a-kind watch with our comfortable Black leather watch strap, making the dial’s numerals and watch hands glimmer even more brilliantly.

The American Waltham Watch Company initially produced the Boston 466’s pocket watch in Waltham, Massachusetts, in 1925 — the same year Charles Francis Jenkins synchronized the transmission of sound and pictures. This remarkable innovation led to the invention of the first electronic television two years later by Philo Taylor Farnsworth, who was only 21 at the time.

Charles Francis Jenkins went on to contribute even more to the advancement of television, including the Jenkins Television Corporation, which was the first U.S. television broadcasting station, and the Society of Motion Picture Engineers (SMPTE). In 2011, 77 years after his passing, Jenkins was inducted in the National Inventors Hall of Fame. 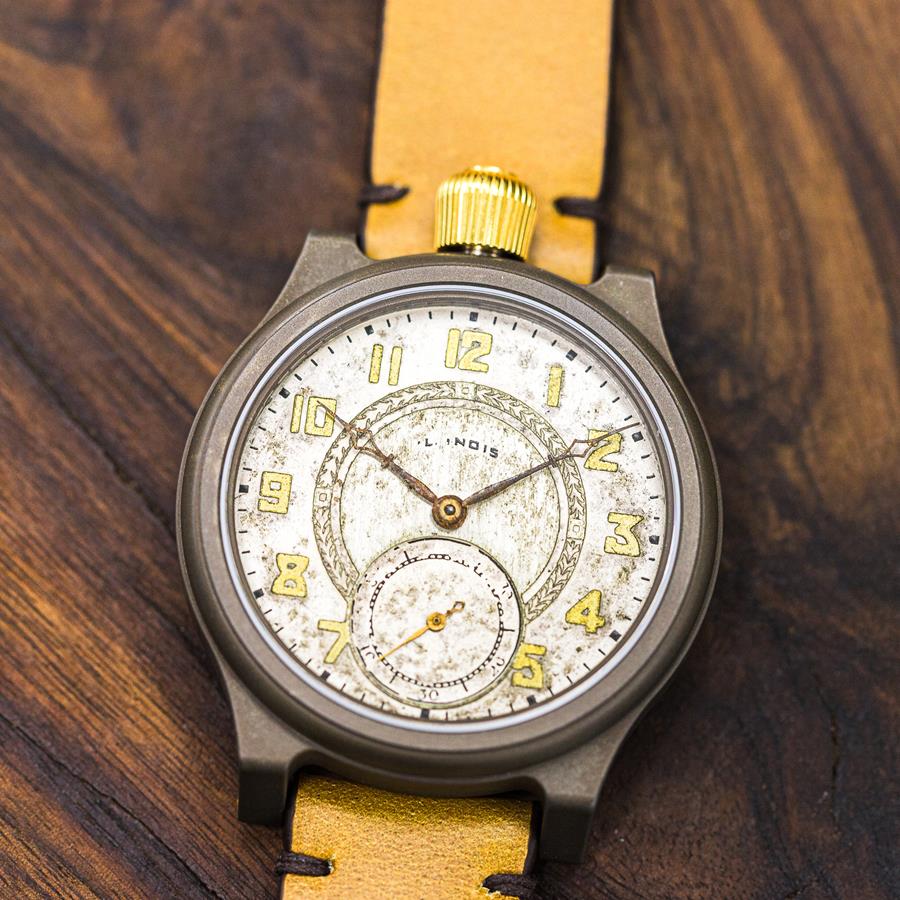 We’re pleased to present this remarkable antique piece initially produced by the Illinois Watch Company — the Springfield 532. The watch boasts an eye-catching dial with a stunning floral center pattern and bold, light-gold numerals that glimmer impressively against its aged, white background. The front of the watch also features a helpful subdial matching the dial’s style and colors as well as unique diamond kite hands. We paired the Illinois Watch Company’s sophisticated original pocket watch with our robust Gunmetal Titanium case and gold-plated crown, complementing the dial.

On the back of the watch, you can view the timepiece’s 405-grade open-face movement with gold-plated gears. These gears are powered by 17 opulent-looking jewels throughout its center bridge plate. Finally, we equipped this already remarkable watch with our hand-crafted and comfortable Rye leather watch strap, making this one-of-a-kind antique piece even more stylish and desirable.

The Illinois Watch Company originally manufactured the pocket watch in Springfield, Illinois, in 1927 — the same year the Roxy Theatre movie palace opened in New York City. Although the theater closed and was demolished in 1960, it served as the location for important film premiers, including The Robe — the first film to use widescreen CinemaScope — in 1953.

The Roxy Theatre was one of the largest movie theaters in North America and could seat an impressive 5,920 people. The building featured a stunning, Spanish-inspired auditorium that purportedly featured the world’s largest oval rug at the time. With its important premiers and lavish design, the movie theater became known as the “Cathedral of the Motion Picture.” 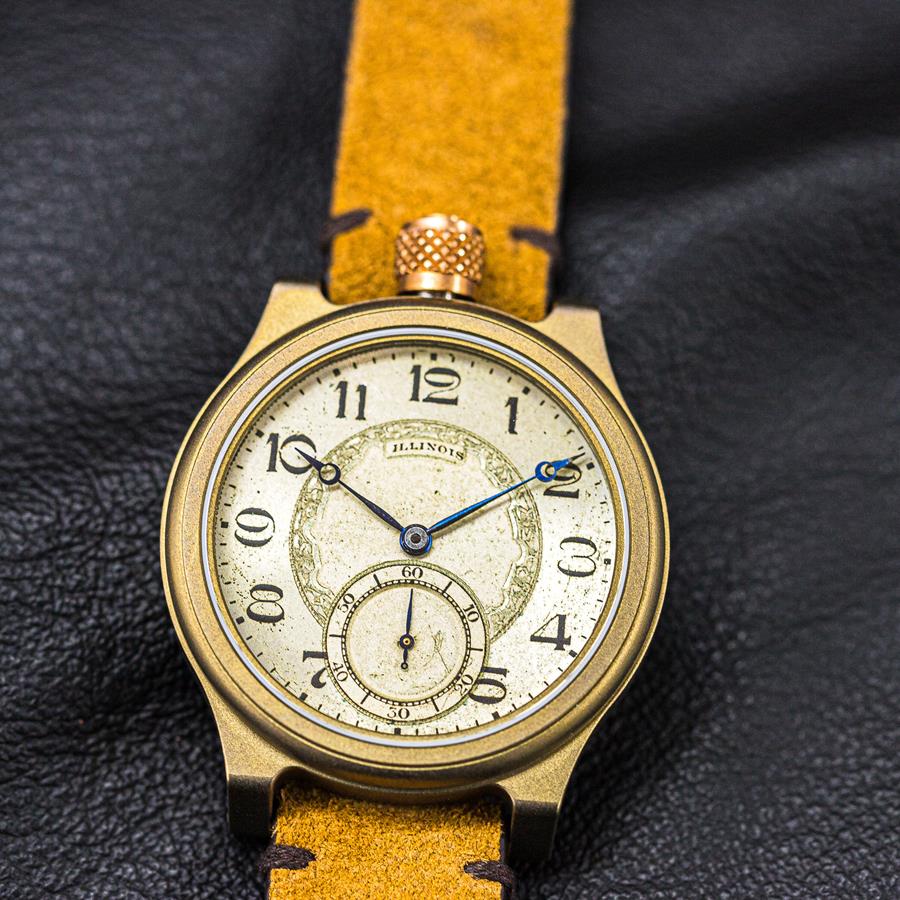 We’re delighted to showcase this splendid piece originally manufactured by the Illinois Watch Company nearly a century ago — the Springfield 528. This breathtaking timepiece boasts a stunning cream-colored dial with an intricate center pattern and stylish black numerals. The front of the watch also displays magnificent blued steel heavy moon watch hands. We encased this antique pocket watch within our Bronzed Titanium case and equipped it with a copper crown, complementing the watch’s unique colors and design.

Our Bronzed Titanium case comes with a transparent back, enabling you to view the pocket watch’s stunning inner workings, including its 405-grade open-face movement with a center bridge plate and going barrel. You can also view the piece’s historic engravings, reading “Federal” and “Illinois Watch Co Springfield.” Finally, the back of the piece boasts rose gold-plated gears powered by 17 sumptuous jewels. We topped this one-of-a-kind watch off with our rugged and stylish Mojave leather watch strap, and we even added a solid bronze buckle, making the final piece even more special.

The film contains one of the most iconic scenes from the silent era of filmmaking: a sequence in which Lloyd dangles from the side of a skyscraper while holding onto a clock hand. Although the famous feat looks incredibly dangerous, the production company accomplished the stunt by building a fake wall on top of a skyscraper, creating the illusion that Lloyd’s life was in jeopardy during the climax of the film.

In 1994, the Library of Congress added the movie to the National Film Registry because of its aesthetic significance in the history of film. 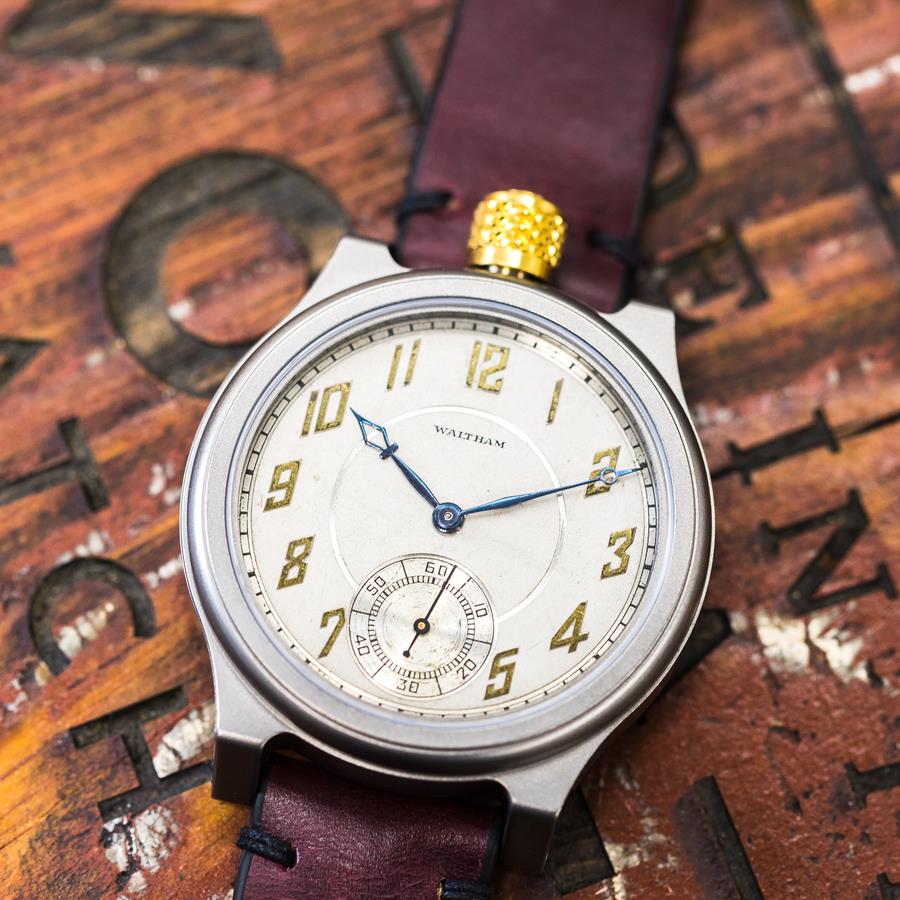 We’re pleased to bring you another unique piece of timekeeping history originally produced by the American Waltham Watch Co. in 1924 — the Boston 464. This watch’s elegant face features a clean white background accompanied by gilded numerals. The timepiece also pairs a blued diamond kite-shaped hour hand with a moon-shaped minute hand, adding to the piece’s individual nature. We have paired this antique movement with our sandblasted titanium case and a gold-plated crown to draw even more attention to this stunning piece.

The back of the watch — which you can view through our proprietary clear-backed case — includes an eye-catching machined nickel bridge plate that brilliantly showcases the movement’s inner workings. The 21 sumptuous screw-set jewels gleam in the light as the polished nickel gears turn around them. This moving piece of history also features an eye-catching inscription that reads, “Waltham U.S.A., Riverside.” We also added our supple Merlot leather strap to complement the watch's uniqueness.

In the same year this watch was initially manufactured, four U.S. Army planes set out on the first worldwide flight. Of the four planes that departed from Seattle, Washington, only two survived the 26,000-mile trip. This landmark journey lasted 175 days and concluded on September 28th.

If you wanted to complete a worldwide flight today, it would only take 40 days — less than a quarter of the time that it took these aviation pioneers.