Did you hear? We Won! Again!

Your Weekly Roundup of watches is below, but first...

We've got some big news to share with you!

If you hadn't heard, we got sued by the world's largest watch company nearly 6 years ago. The Swatch Group and their sub-brand Hamilton International did not want us to convert antique pocket watches into wristwatches, specifically those manufactured by the original Hamilton Watch Company. We received a cease and desist before we even built and shipped our first watch.

Fast forward to February 2020 after we survived years of legal onslaughts, we finally arrived in Manhatten for our day in Federal Court. 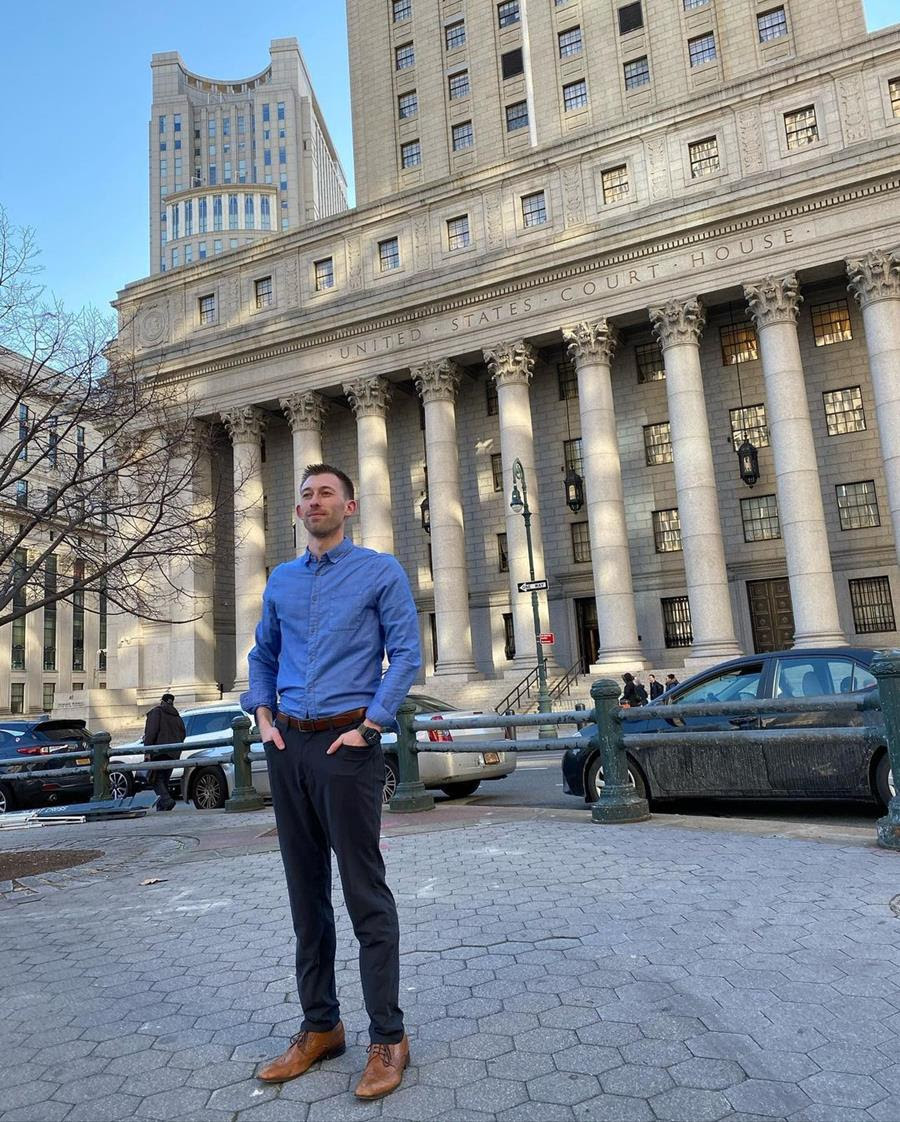 Our co-founder R.T. took the stand and told the judge the whole story. Long story short, after months of waiting, we won the first volley in September 2020. Taking a pocket watch and turning it into a wristwatch, regardless of the brand and trademark on the dial, was officially legal! We always knew it was, but that validation was spectacular.

Swatch Group immediately appealed, and we headed into the next chapter. A panel of federal judges reviewed the first judge's decision, and now almost a year later, we've won again, hopefully for the last time.

"The Court's decision re-affirms something that the law has long made clear: trademark law is not a sword to be used indiscriminately. There must be a likelihood of consumer confusion. Vortic Watch Company expends significant effort to fully educate consumers about its products, and today's outcome confirms the meaningfulness of those efforts,” commented Jin-Ho King, an attorney assisting Robert Lantz, Vortic's counsel.

As we mentioned last week, we're on the road for the third weekend! We were blown away by the turnout in Estes Park last weekend... literally. Not only did we get the pleasure to meet several awesome Vortic owners, but we also had the pleasure of homing two more unique timepieces to first-time Vortic owners. Oh, and our tent almost blew away! 20 mph winds are no joke but thank you to everyone who came out to support! 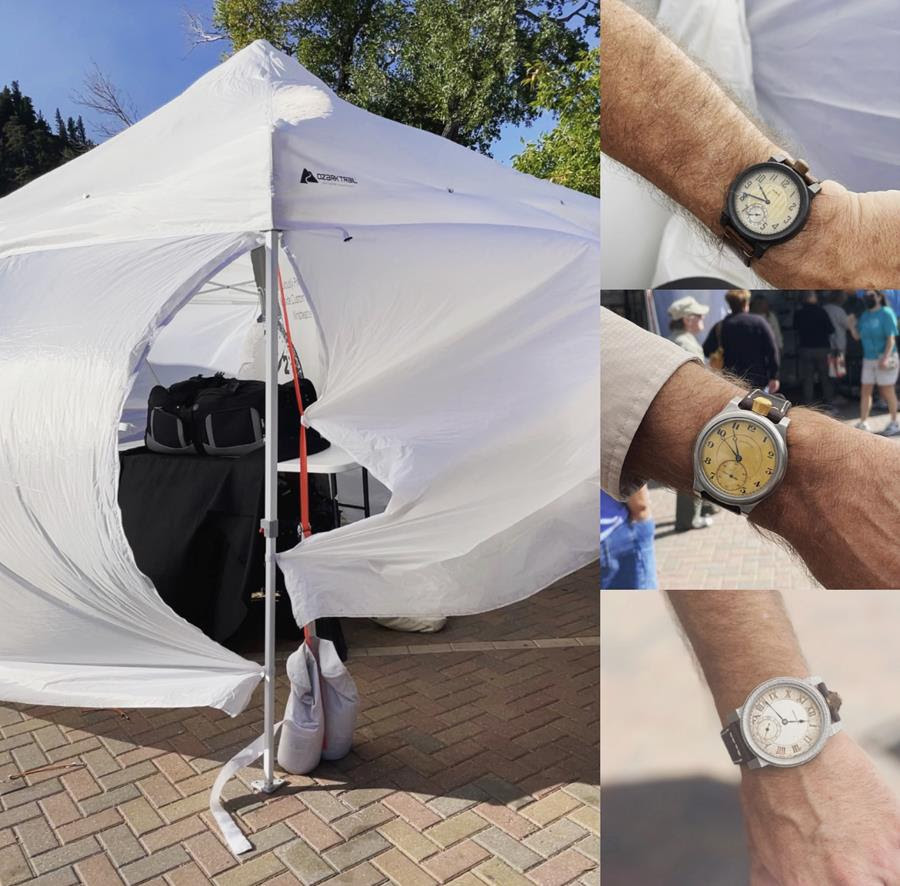 This weekend we would love to see you at the Telluride Autumn Classic! "A 4-day festival that takes place September 23–26, 2021 amid the spectacular display of the San Juan Mountains’ autumnal foliage. This is where enthusiasts of all makes and models convene for a world-class celebration of automobiles, motorcycles, aircraft, and so much more. From high-end restorations, vintage and exotic vehicles, to live music and a vibrant art scene, this historic town of Wild West lore will be filled so many family-friendly attractions, it’ll get everyone’s motor running!"

We will be located in the Heritage Plaza in Mountain Village as part of the Fine Arts & Sculpture Festival. This event does require a ticket so there is quite a list of events you will have access to with both the single-day tickets and the weekend passes including:

We'll be there all weekend with sellable watches so come find yours!

Tickets for the Autumn Classic here!

The time is now (pun intended) to pick your one-of-a-kind Vortic Watch. Our team has been working hard to provide you with a variety of unique timepieces. Take a look, there's something for everyone!

Click the images of the watches to learn more about them.  Make sure to check the website at 12 PM Mountain Time for the Watch of the Day! They tend to sell quickly. 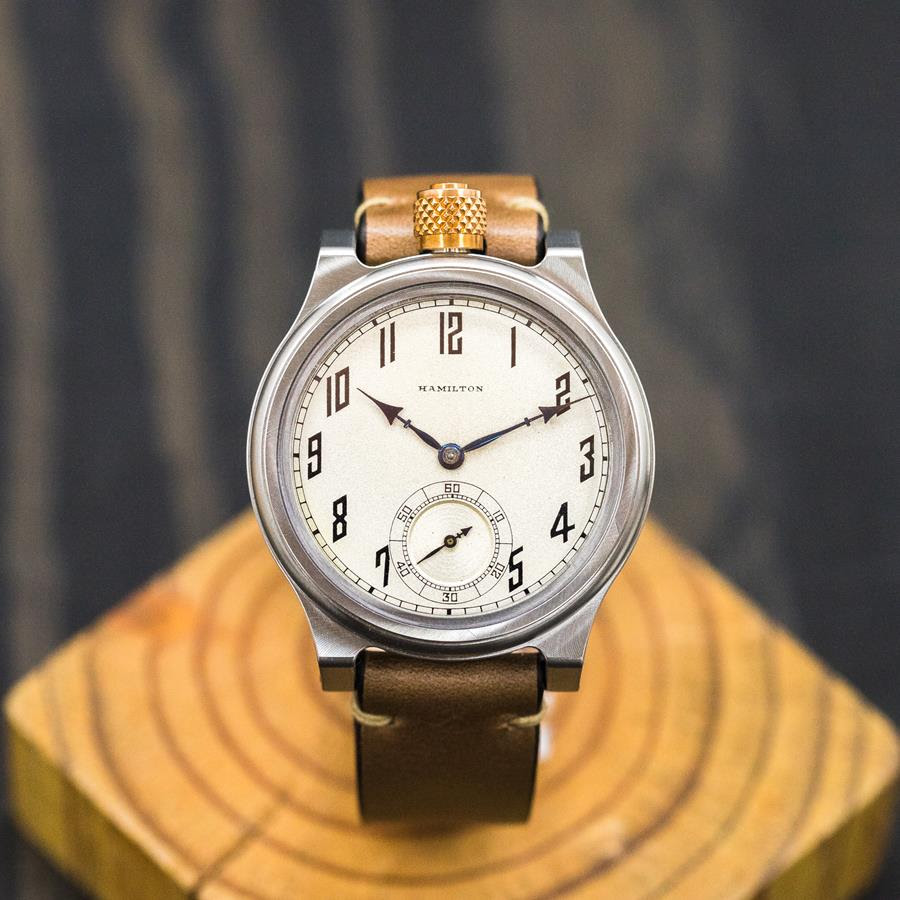 Today we are happy to release this stunning example from the Hamilton Watch Company, our Lancaster 103. This bright, crisp, and clean dial has everything we want from an antique watch while maintaining a modern feel. We love the bold characteristics of these blued-steel hands that stand out nicely against the white face of the dial. Cased in machined titanium to grab your attention, then softened off with our natural leather strap. A copper crown and hardware to match are the finer details that bring everything together nicely on this fantastic timepiece.

At the heart of this watch is a 912 movement originally manufactured in Lancaster, Pennsylvania in 1930. Carefully decorated across this large bridge plate with these eye-catching Geneva lines and accented with stainless steel hardware. The brass balance wheel and jewel fittings contrast well, bringing a touch of color to the nickel-plated elements that make up this movement. In the same year that this watch was originally produced, we saw the passing of the Tariff Act of 1930, which raised taxes on imports to the highest rates ever in the United States. Experts say that this didn’t necessarily cause the Great Depression, but definitely worsened the effects of it due to other countries retaliating and raising their prices on exported goods coming to America. Thankfully, with this watch being American-made, this bill likely didn’t affect the watchmaking industry in the same ways. 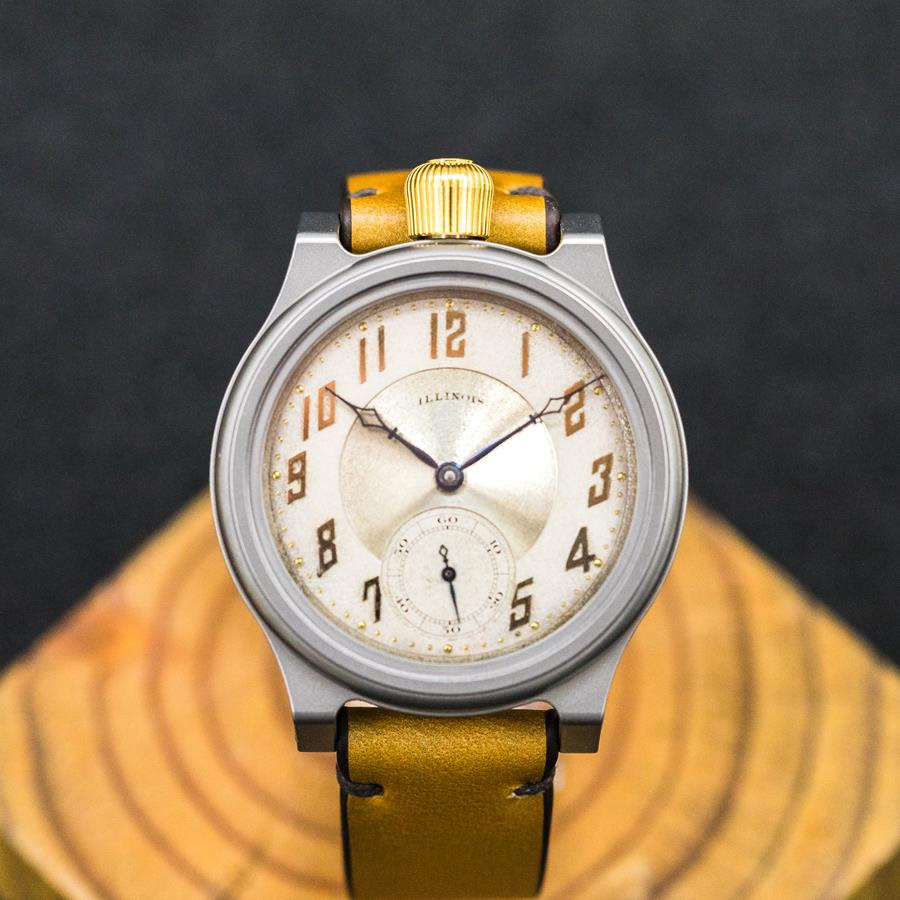 We are very excited to bring you this fantastic timepiece from the Illinois Watch Company, our one-of-a-kind Springfield 437. We were drawn to this watch immediately from the look of the stunning dial that has aged wonderfully over time to create a soft look and subtle golden hue. Minute indicators around the outside of the numerals bring another element of visual interest, contrasted by the dark blue open-kite hands. We kept the look simplified with this sandblasted titanium case and natural band, giving it a less flashy and more fine look. A gold crown, with gold hardware to match, pairs nicely with the overall feel of the dial.

The movement in this watch is quite a rare find for the 274 grade, The Fifth Avenue edition. This is something that we hardly see, boasting 19 screw-set jewels and copper inlaid accents all throughout. Rose-gold gears and a brass balance wheel add to the precious metal visual appeal, as well as brass hardware all throughout this large build plate. The movement breaks away from what we typically see from the Illinois Watch Company and we couldn’t be happier to show it off. Originally manufactured in Springfield, Illinois in 1922, which is also the same year that insulin is used for the first time to treat diabetes in humans. 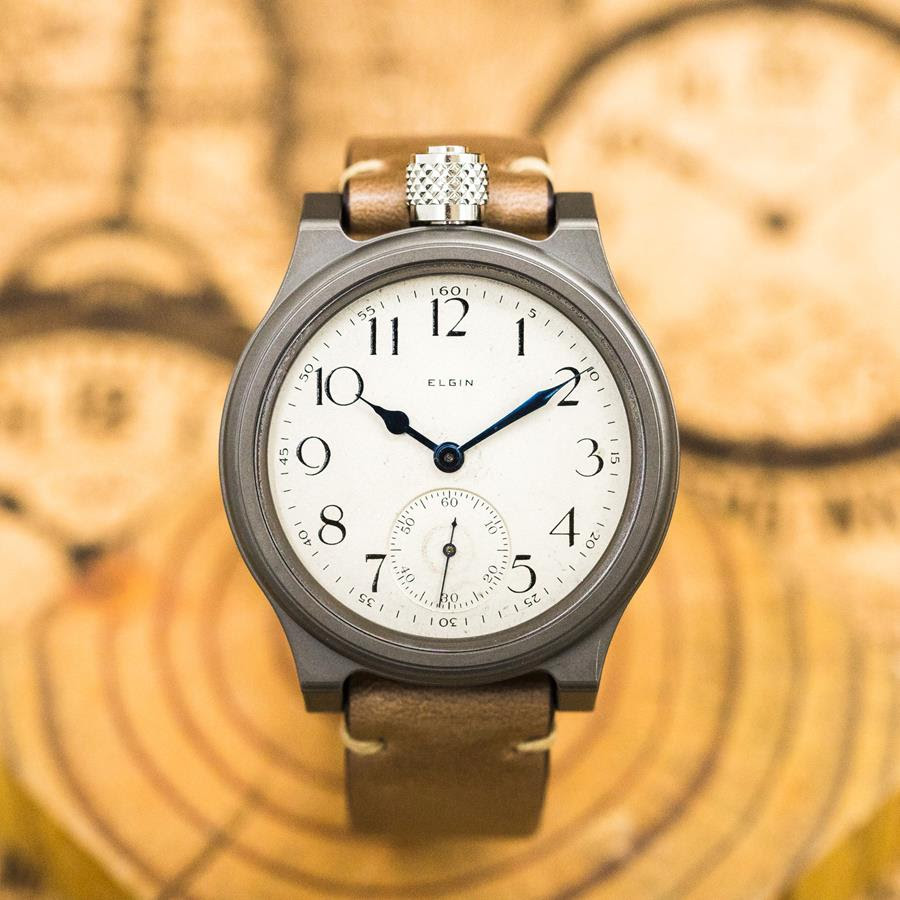 Here we present this amazing timepiece from the Elgin National Watch Company. This brilliant, dark gunmetal case grabs you immediately and pulls you in to take a closer look. Accompanied by these thick, bold hands and crisp rounded numerals that stand out against this softly aged dial. The minute indicators around the outside edge are the small details that set it apart, topped off nicely with our nickel-plated crown and hardware throughout.

The movement inside this watch is begging to be shown off, with this classic Elgin main plate shape that lets the gold-plated gears beneath show through next to the balance wheel. The gears spin consistently on 17 screw-set jewels, while this Moseley regulator keeps the balance wheel perfectly on track. The delicate machining can be seen throughout, as the spiral pattern on the mainspring wheel spins and produces an extra element of movement to follow along with.

This watch was originally produced in Elgin, Illinois in 1933 just a bit outside of Chicago. March 4th of 1933, Franklin D. Roosevelt is inaugurated as the 32nd President of The United States and vowed to pull America out of the Great Depression. 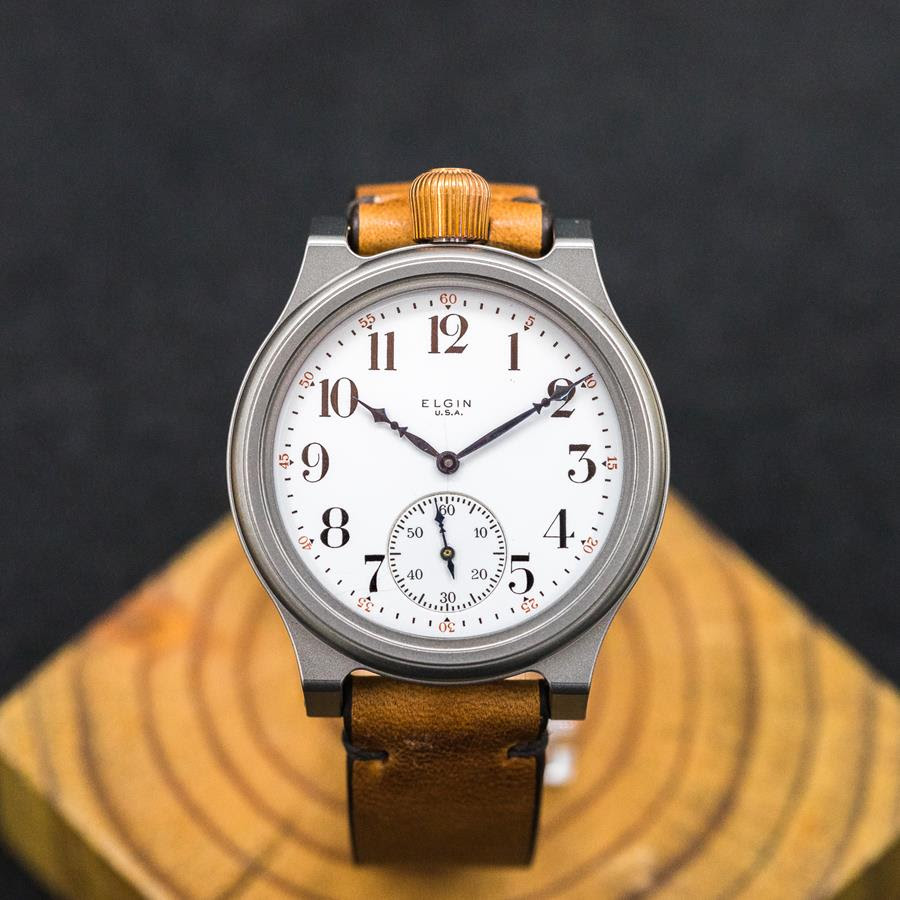 Here we present to you this beautiful watch from the Elgin National Watch Company, the Chicago 439. The clean and crisp feel of this watch brings this antique into the present with a very modern look. Our soft, sandblasted titanium case pairs perfectly with this immaculate white dial. We love the feature of the red minute indicators around the outside of the numerals, as well as these dark blue hands that stand out nicely. The copper crown blends in nicely with our tobacco strap, letting the dial and case steal the show.

The movement inside of this watch has a little more wear and tear to showcase, which we enjoy letting shine through. 17 screw set jewels and gold-plated gears power this movement, as well as this Moseley regulator that keeps the balance wheel on track. Originally manufactured in 1926 in Elgin, Illinois a little outside of Chicago. This was also the same year that Henry Ford introduced his 40 hour workweek model for his employees, eventually becoming a standard for most of America. 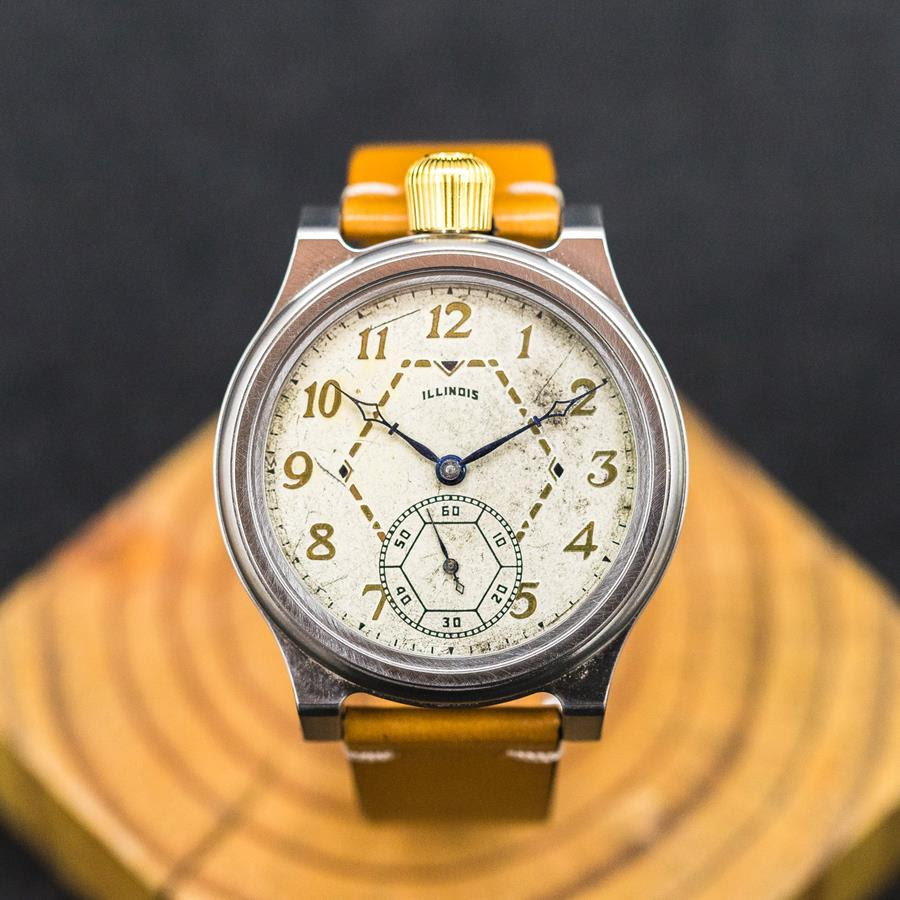 We are happy to present to you this absolutely gorgeous watch from the Illinois Watch Company, our Springfield 434. The dial on this watch is truly unique and one-of-a-kind. Paying homage to the shape of its original case, this hexagonal-shaped design in the center of the face brings a lot of character to the look of this watch. We paired this watch with our machined titanium case to bring a lot of contrast from the old and the new and knew it would turn out well with how much wear and tear this dial shows. Our rye strap has that light and bright feel, while the gold crown and hardware brings out the gold coloring of these numerals.

This watch has much to show off on the underside as well, decorated nicely with these horizontal accents that have been carefully machined all throughout. This amazing Time King features separate bridges for the second and third escapement wheels and 17 absolutely stunning jewels. Rose gold gears and a brass balance wheel tie in the precious metal look and keep the eyes moving around to explore every aspect of this movement. This watch was originally manufactured in Springfield, Illinois in 1930. On April 6th 1930, the infamous Hostess Twinkies were invented by a bakery executive named James Dewar.